I put this mower in the 'Sporting connections' section because of its name, mindful that an identical mower is known with the name 'Wimbledon'.  I believe (I haven't looked inside it for many a year) that the castings were made by the Hilltop Foundry, but whether they assembled the mower, I do not know.  It's a conventional side-wheel design in every respect apart from the large trailing roller, which makes it more stable than the usual type.  The relationship between Edgbaston and Wimbledon may be coincidental; Edgbaston was a brand name used by Fletchers Hardware, a wholesale ironmonger in, that's right, Edgbaston!  In their 1937 catalogue, they showed an entirely ordinary side-wheeler called 'Edgbaston'.

I have two different Edgbaston sidewheels but no decent photos of either, hence not entered into the Virtual Rally. The image below is of one of them, during dismantling, ready for restoration. Below that, a copy of an advert dated 1937. This would appear to be the same model as the photo. 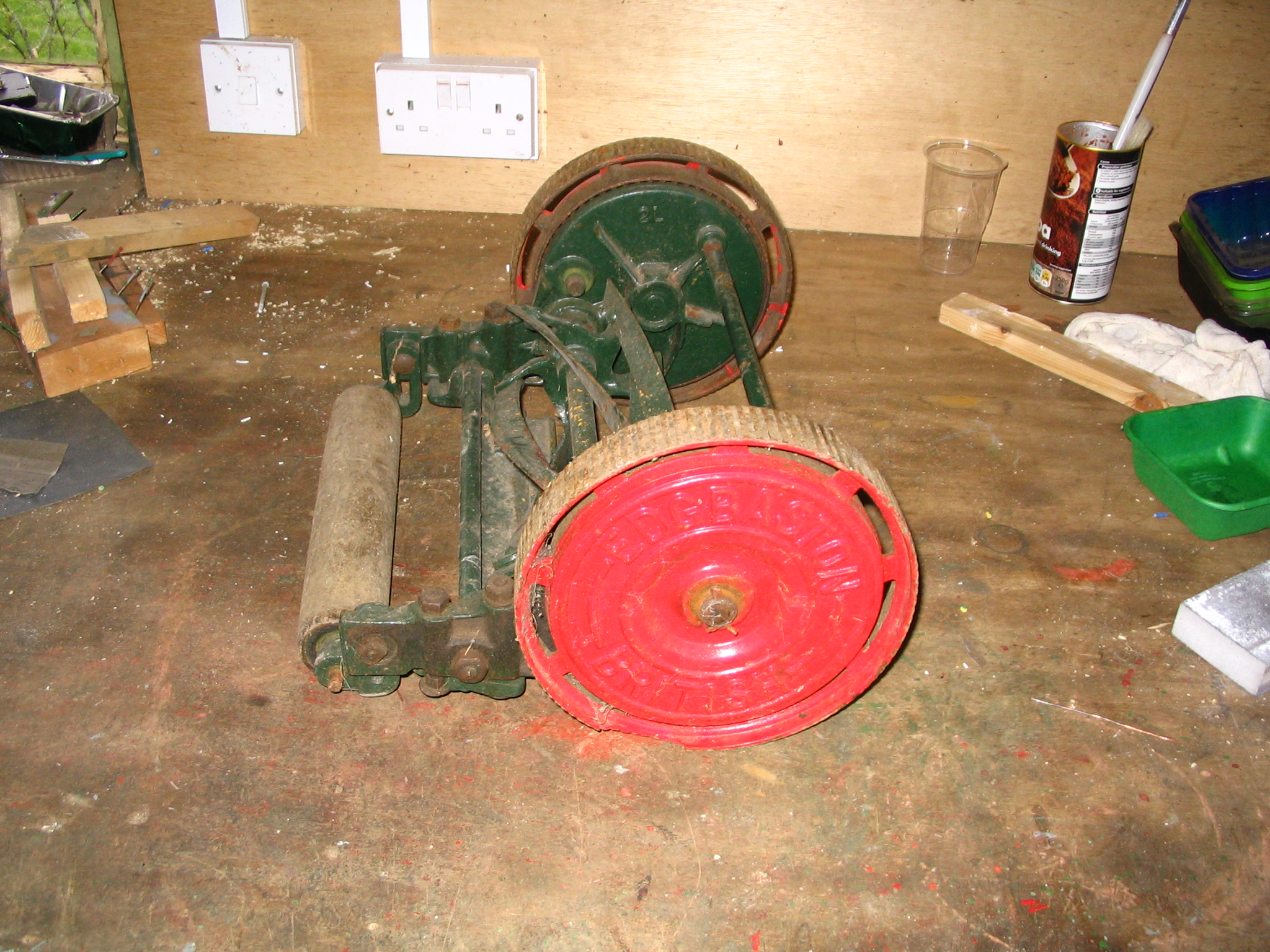 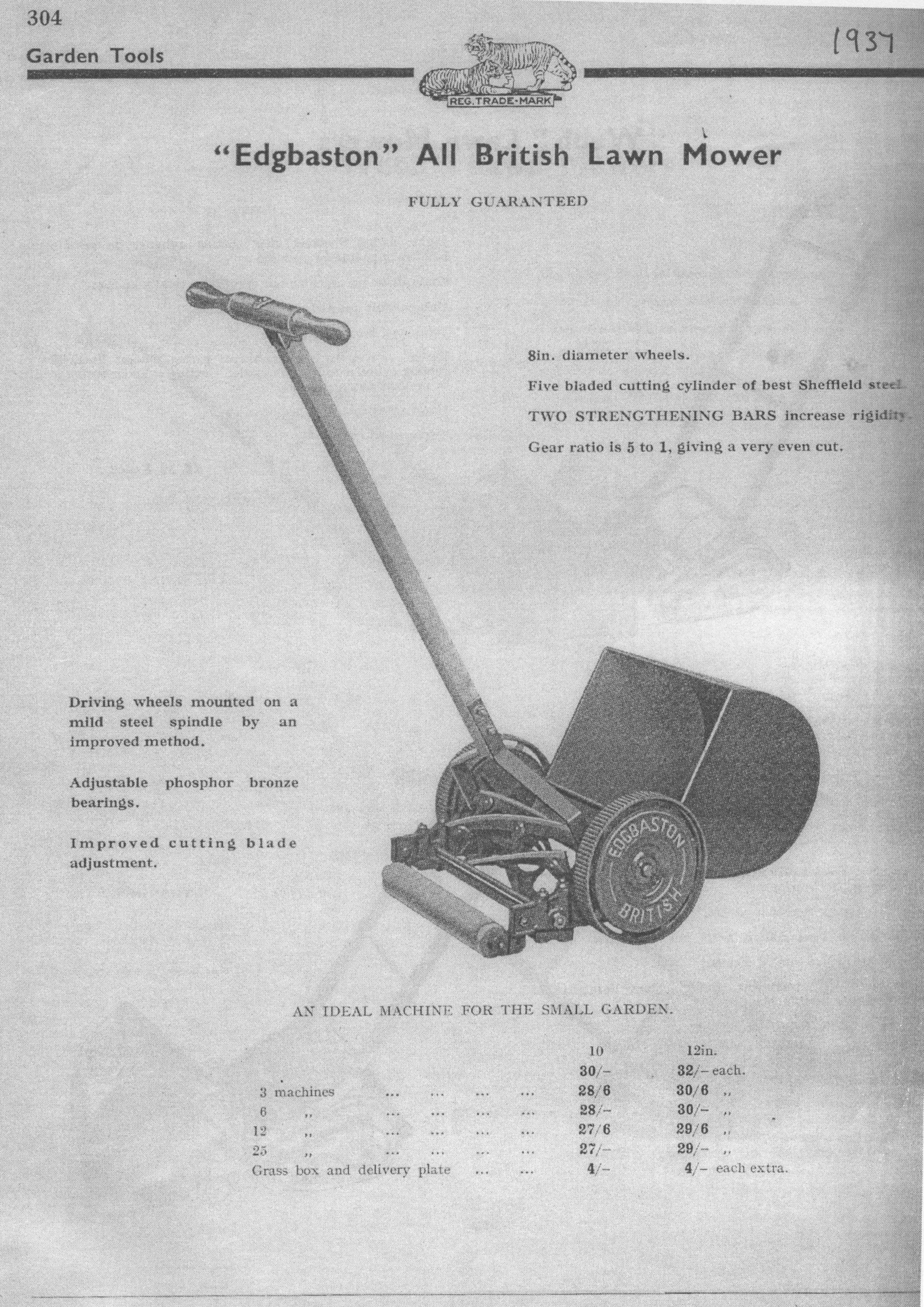 I suspect that the other Edbaston I have is an American sidewheel (superficially it is similar to a Closecut). This can be seen (with the green wheels) on the left hand side of this group. At the right hand end (with the red wheels) is a Hilltop. 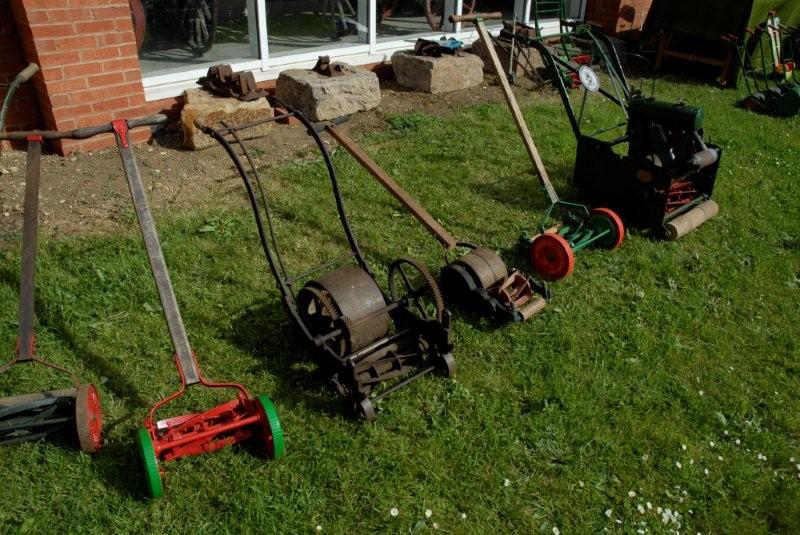 Is it me (or to put it another way, should I go to spexsavers), but is the cylinder in the first picture fitted the wrong way round ? 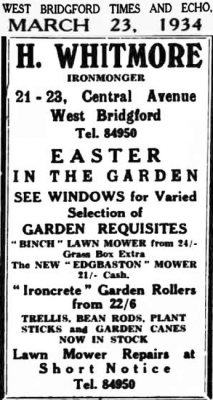 Hilltop Foundry were prolific producers of catalogue machines throughout the 30's,and I suspect as time goes on more catalogue machines will be found to be made by them.The Edgbaston is one and quite rightly the Wimbledon is another,The extra roller on the rear was a patent from 1938 which was always an extra,We actually own a Wimbledon with the roller and yes we purchased it many years ago in Edgbaston!

The ad which Clive has found also mentions the Binch, that was made by a company called Condruip who were really importers and agents for different lawn mowers,one of the agencies they had was for Coldwell who quite by chance produced the first models of Edgbaston.

In the early years of Lawn Mower production there was a cartel made up of Ransomes,Shanks, and Lloyds,which essentially fixed the prices of their machines,Today this is an illegal practise.Green's were never part of the cartel,So sold via the Iron monger chains along with many interesting importers

Hilltop disappeared in the year 1939,along with another well known company Arundel Culthard who it had ties with,the latter became part of the Birmid Qualcast group