It's been some while since I was last here, six or seven months I think.  I hope everyone is keeping well in these difficult times.

In the summer last year I decided to revisit my childhood by buying an Atco 14" De Luxe. It needed a little bit of tinkering with and an oil change and once done ran reasonably well, and still does. Over the last few months, when time was available, I've stripped some of the panels back to bare metal and resprayed them and it's coming on OK. With this lock down, I'm doing more on it.

After buying the 14" Atco, a few weeks later I purchased a 17" one that was a none runner. Just last week, after cleaning and gapping the points without success, I eventually got around to changing the coil (and the points in the end), and I'm happy to say it now roars into life. Although, today, I feared for the worst, as when I tried to start it, it would only turn over a little bit and then stuck. I wondered if something major had let go internally, but I was pleased to find on removing the flywheel that the new ECC screw I'd fitted had come loose and was jamming things up.

Anyhow, I've a couple of questions that the knowledgeable here might be able to help with.

Secondly, I'm aiming to replace the front rollers on the 14". I've removed the rollers from the mower on the spindle, but I cannot get the rollers off the spindle. There's a large nut on one end which I imagine just needs to be undone, but it's not moving. I just want to check that it's just rust stopping it, and that I'm not missing a simple trick of how to remove it. Photo attached. Your image shows two spacers or collars outboard of the nut, are they free to move? If not you will need to free them off , possibly by positioning them on a solid surface and hitting the opposite side with a drift and lump hammer while turning in 90 degree increments. That should break any rust bond. Then apply a spanner to both the end nuts , one will give allow you to slide the rollers off.

You could use heat on the collars but shocking them is usually sufficient and avoids singing the roller !!

Thanks Wristpin. Those collars wouldn't move. The nut moved a few turns up to the neck of the collar (after some force and oil), but then stuck. However, with a combination of bashing and heat, as you suggested, I then got the nut to undo more and push the collar off. I had to hold the other end in the vice, because there's no nut there. It's just welded to the plate. Not sure if that was how it left the factory or if it was done later.

Anyhow, I'm now able to remove the rollers and put some nice new ones on. Thanks again.

I had to hold the other end in the vice, because there's no nut there. It's just welded to the plate. Not sure if that was how it left the factory or if it was done later.

Sounds as though yours is an earlier height adjuster with just one lever. later ones with a lever either side had a nut at each end of the shaft.

Yes, that's right, on the 14" it just has one height adjuster lever. There's one each side on the 17" model I have.

Darren, I have been reading your posts with interest. What hard wood did you go for in the end? Also would be great to see photos of your ATCO too as I have just bought one myself.

Now I've removed the front rollers on the 14" Atco I've contacted an eBay seller about replacements. As yet, I've not heard back. It seems there are three types of wood on offer from this seller, oak, beech, and iroko. I was thinking of going for oak, and oiled rather than vanished. If anyone feels that there's a better option and/or another good supplier, then I'd be interested to hear.

My particular interest is in petrol Atcos of the mid to late 60s (early 70s), mainly because I used one as a youngster. As well as the 14" Atco, I also have a 17" one. I'm replacing bits and restoring little by little. Both run now (the 17" needed new coil and points), so I think the engines are both in reasonably good order. It just remains to strip and paint all the panels, change the rollers, get the blades refurbished, add some new decals, etc.

Does the "Triumph" in your screen name refer to a car or a motorcycle? If it's a car, we have more than Atco in common, as I have '68 TR. 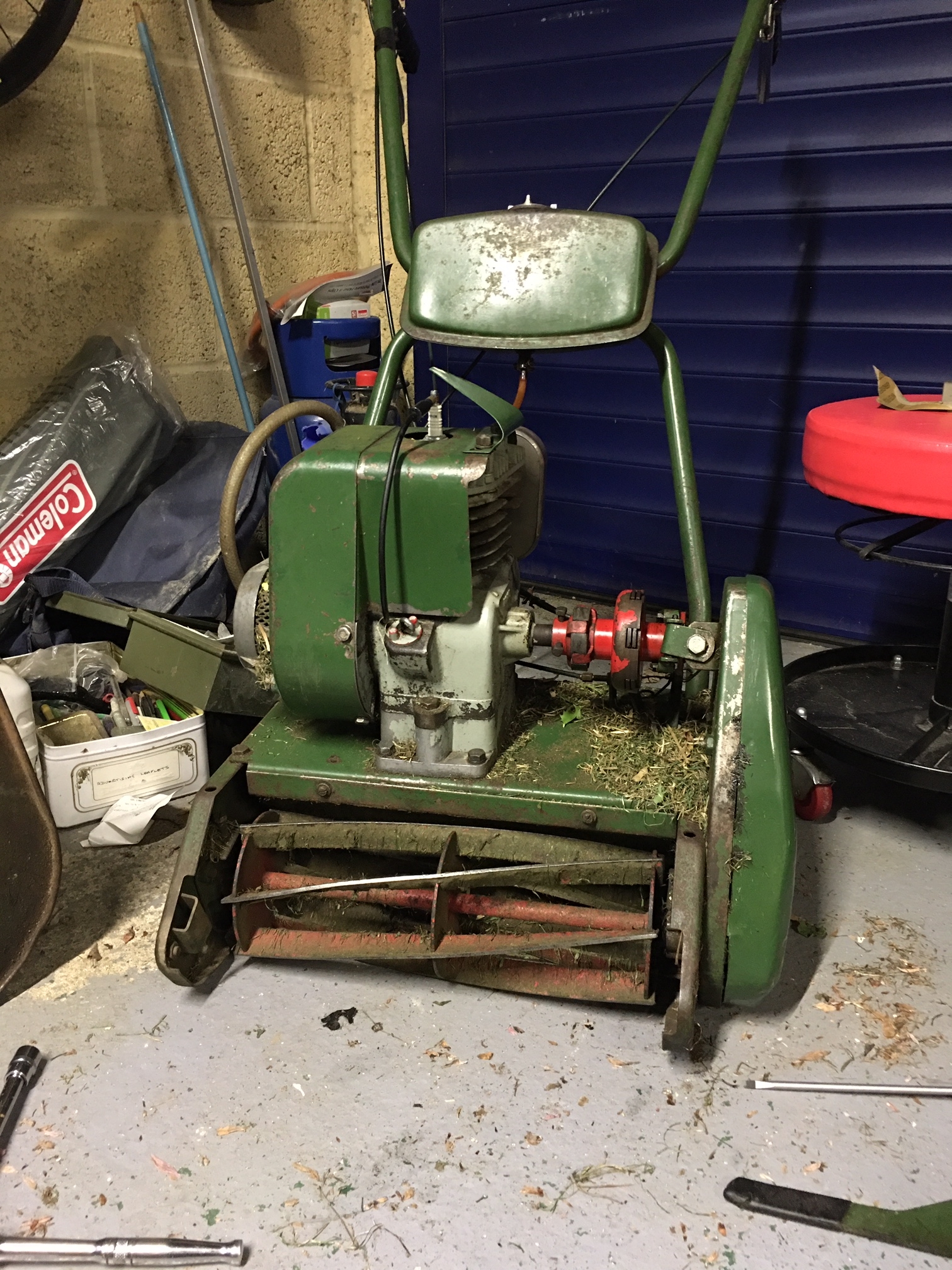 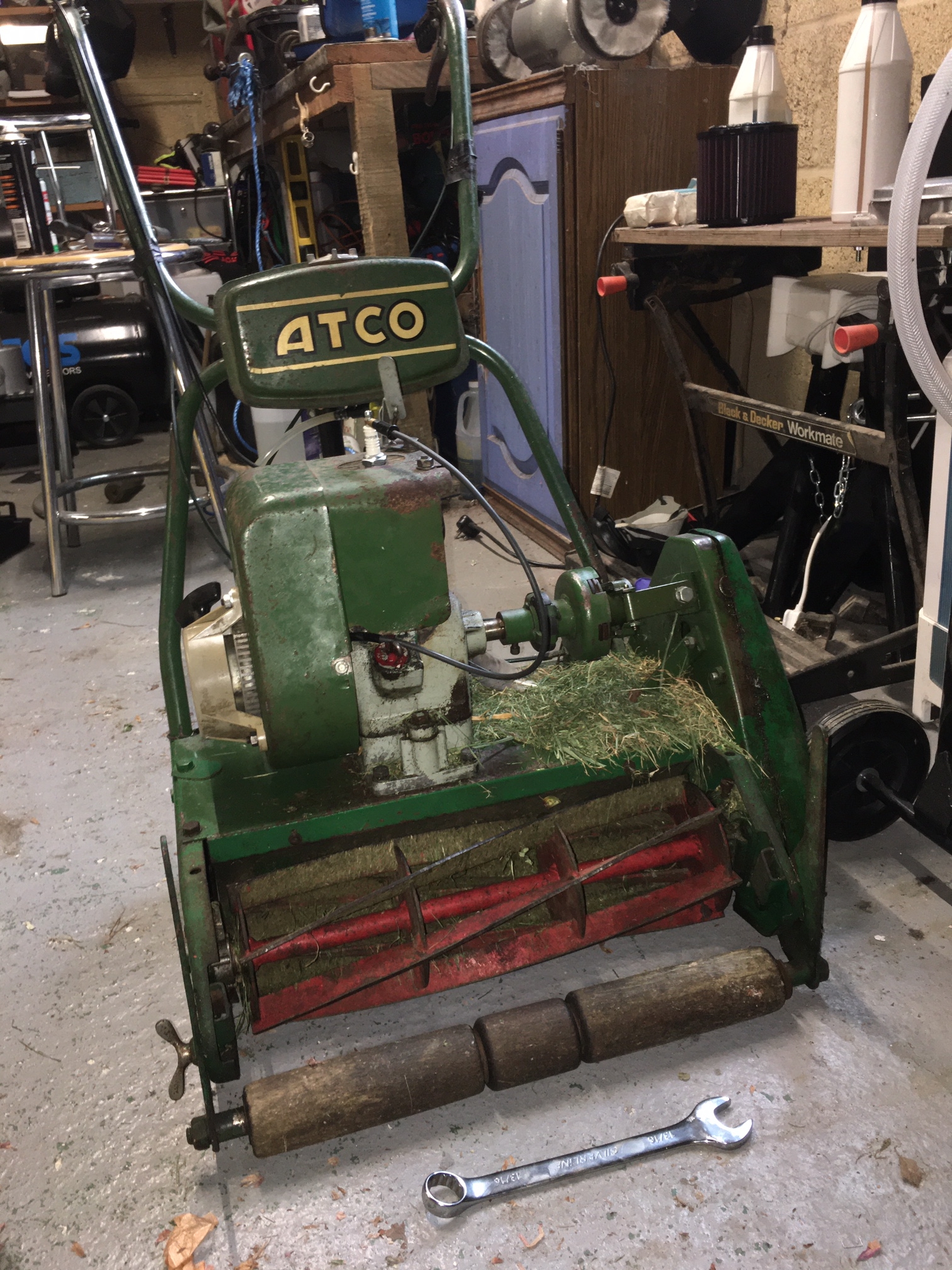 I did have a Triumph Herald but I am more of a Morris Minor LCV  van man myself! The Triumph66 is the year we won the World Cup and it's the year of my birth which is also a triumph too!

Thanks. I like the Herald and the Minor; in fact I like most everything of that era. I'm a '65 man myself!

I've just received contact from the chap who makes the rollers, so hopefully I'll be able to get a new set soon. In the meantime, I can get on doing a bit more paint stripping and spraying. I've also just bought a spare fuel tank. I didn't need it, but I like to have spare bits and pieces on hand. Picked it up for £10, which I thought was reasonable until I saw the amount of rust in it. Thankfully, it holds fluid without leaking, so I think there's a good chance it can be brought back into service.  Another little project to keep me occupied!

Back to the first post - the ECC screw I assume is the eccentric one to adjust the points gap. If so, I would remove it as you can adjust the gap without it and the consequences of it falling out in the mageto could be expensive . Seem to recall they were sort of riveted to to the backplate?