*changed title now I know what its is*

Some time ago I was given a push mower by an old friend, and it has remained in my shed for longer than it should.
Recently I started looking at it with a view to restoring it to working order (I want to use it rather than having it as an ornament).
The mechanism is completely jammed, and neither the wheels nor the reel move at all.
My first thought was to remove the wheels, but having removed the wheel covers there is no obvious way to proceed further.  There is what _might_ be a removable cover in the centre of the wheel, but trying to prise it off just started bending the metal and no sign of it moving, so I didn't risk any more forceful action.
Can anyone help me
i) identify the mower
ii) point me at a parts or exploded diagram, or a manual or...
iii) suggest how I need to proceed.

I'm a reasonably competent DIYer, but have no experience with old mowers at all, so an assistance would be gratefully received. 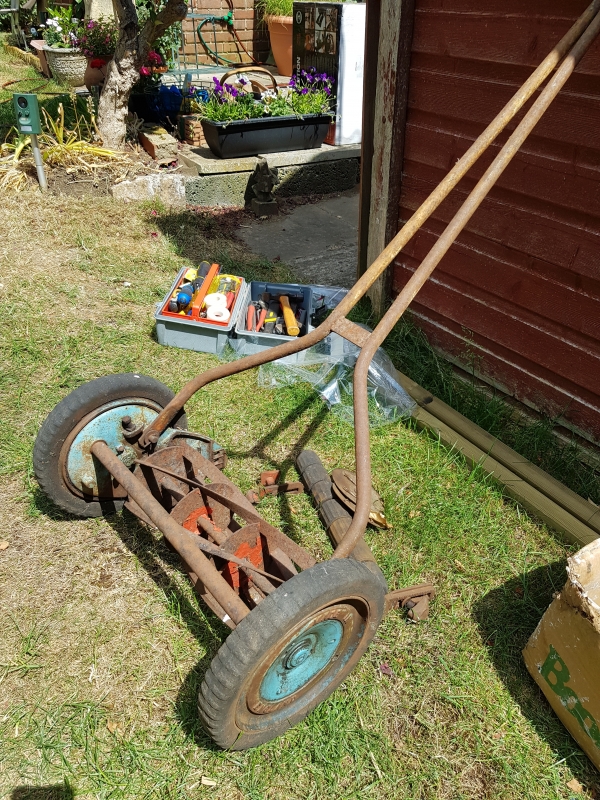 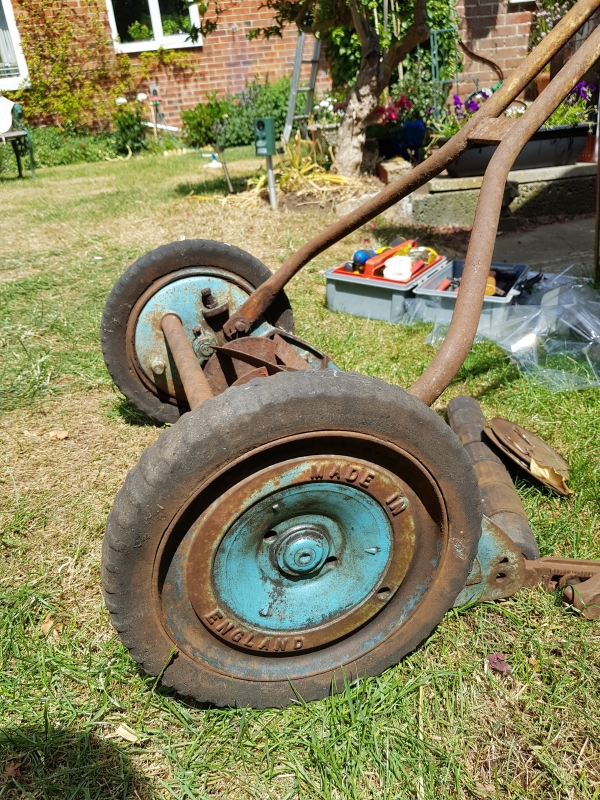 Interesting -- at first, seeing the handle, I thought this was a Qualcast B1, but it isn't. I don't recognise the model, but certain features suggest it was made by Suffolk.  One of those features is the stub axles; on Suffolks, they are separate from the side plates (on most other makes they are part of the casting).  The Suffolk axle has an integral head  holding the wheel in place, which is why you can't take it off!  Instead, look on  the inside of the frame, where the inner end of the axle is held in place by a small bolt.  Loosen that bolt, and wheel and axle can be removed together.  It looks in pretty sound condition; the seizure is probably in the cylinder bearings, which will become evident once the wheels are off.  If it has ball bearings, it will probably need new ones, since once they are rusty they will never work properly -- there must be absolutely no play in them if the machine is to cut grass properly.  If they are adjustable, like the ball bearings used on some Qualcast models, and the rust is slight, you might get away with cleaning them up and adjusting the play out.

Forgive the absent-mindedness of an ageing collector:  I have realised that this is probably a Suffolk 'Super Clipper'.  The only picture of one that I can find has a conventional wooden handle, a different shape to the side frames, and no wheel covers, but that curved side-frame on yours is familiar from other Suffolk models of the fifties.  Odd that yours does not say 'Suffolk Super Clipper' on the wheels, but that may be because the central cover leaves limited space, and the cover itself may originally have had the name on it as a printed transfer.  I will attempt to upload a scan (taken from an old photocopy) of a 1953 catalogue, which confirms that the mower has ball bearings, and was painted blue, another feature that made me mistake it for a Qualcast! As for the handle, it is so Qualcast-like, that I suspect it of being a replacement for the original wood handle.  Qualcast and Suffolk eventually merged,but even then, although the Suffolk Viceroy (their standard side-wheel mower) was modified to use Qualcast castings, the handle was different.

Having said that, I've just noticed the paragraph at the bottom of the Sampson ad; the Super Clipper Model Ten had chromium plated hub caps and tie bar, tubular steel handles and a rubber roller, as well as 10-inch rubber tyres. I can't believe they were really 1/4 inch larger than on the other model, but the hubcaps and tubular steel handle suggest that you have a Model Ten.

Many thanks for your very helpful and informative replies, I very much appreciate the detail and assistance!

Once the weather improves slightly and work permits, I'll have a look at removing the wheel as you suggest.  I too am puzzled by the adjusting screw and locknut; it has no discernable purpose as far as I can see, except possibly to alter the angle of the handle (and even then they seem not quite in the right place).

Unfortunately the wheel covers are so rusted that its not possible to say if they had any identification transfers, though they were once chromed, as was the tie bar.  The handle is another mystery, as even removing the split pins and washers doesn't allow it to be removed; the cross piece and rigidity of the tube stop it flexing enough to clear the inside end of the mounting stub.

I'd certainly be interested in the catalogue page if you are able to upload it.

Having lightly rubbed some of the rust on one of the wheel covers, I can see the remains of some red paint; squinting and using a lot of imagination, I could convince myself I can see "Clipper" on the bottom. I was able to remove both wheels using the handle end of an old cold chisel as a drift.
Clearance to hit the chisel was the main issue, but both wheels came off without major problem. Inside was fairly gunged up; after a preliminary clean the ring gear looks in reasonable condition. The LH driving gear came off easily. I even remembered to photo the pawl so I know which way to put it back. The RH gear was firmly stuck. Eventually, soaking in penetrating oil, applying heat and levering shifted it enough to get a gear puller underneath, and I could get it off the axle.

The tie bar and the bolt at one end of the bottom blade didn't resist.  I was so confident about the other end that I sheared the bolt, mistaking movement for unscrewing...  Will need to be drilled out and replaced.  The tie bar inside its cover looks like it shows the original sky blue colour, rather brighter than the other blue parts. Now I could see the bearings. Both were super rusty and decrepit, one just a solid congealed mass of rust.  I removed the carriers and pried out the bearings and seals.  Cleaning and replacement  with new ones is in progress. One question I have is about the bearing cones -I assume the one on the LH (with the pin in it) should be removable, though it is firmly seized in place. The other end I assume is welded or pressed onto the cylinder axle.  Is this correct? The cones themselves are in pretty bad condition.  Is it possible to get replacements?  And if so how would I remove and fit the RH one.  Or am I stuck with cleaning them up as best I can?

Finally for now, there are missing oiler covers.  I believe they are push fit 1/4" flip top.  Can anyone suggest where I could get new ones?

More cleaning will follow when I have some time, then I will see if I can reassemble it enough to test the drive mechanism before I think about things like getting the cylinder ground.

The one with the notch in it would have been a sliding fit with a large spring washer (Thackeray washer) behind it exerting outward pressure into the bearing races.

The opposite cone would have been an interference fit from the outset.

Removal. Clean up the shafts outboard of the cones and while supporting them on an anvil or other similar solid lump - perhaps the head of a sledge hammer - take a substantial drift and lump hammer , hit all the way around them . This should “ spring” them on the shaft.  Otherwise, carefully slice them off with a thin cutting disc on an angle grinder.

Thanks wristpin - are you ever stumped by a question? :)  Or ever miss a new post?!   I've learnt so much by reading replies from you and a couple of others in these forums on all sorts of subjects.

I'll give the hammering a go when I have a have a moment... now the cricket season is over (I'm an umpire) my weekends are a little less occupied.

May be something of interest here

Thanks wristpin, very interesting.  There's a lot of similar design/construction (understandably I guess) to the Clipper.  I'm also grateful that the currently available Qualcast bearings and seals still fit; common sizing after 50+ years...

Yes , there does seem to be a lot in common over the model range . I wonder why the Scandinavian Special was created?

I wondered about that also.  They added Swedish to the languages for assembling the handle for the special, even though Norwegian (I think) was already there...