I was recently given a Qualcast Suffolk Punch 30; it came from the same home as the Suffolk Colt which, thanks to the help of this Forum, is up and running. This Punch had also been standing for many years but I managed to get it going on the first afternoon. The Dellorto carburettor was cleaned out and blown through with compressed air and, with a few bits of tidying up and adjustment, the mower runs pretty well and cuts the grass - which is my principal goal! Thorough cleaning and perhaps re-painting can now follow.

However, there is an immediate issue on which I need some help, please. Within five/ten minutes of starting, the revs start to increase - without any movement of the throttle hand-lever - and no movement of the lever, up or down, has any effect. The only way to bring the revs back down is to push the lever down - quickly into and back out of the "Stop" territory; the revs are then lower but, shortly after, increase again. ( I don't know how close to maximum the revs get, but they're much higher than called for and there's no change in the flat level of the grass.)

It was suggested to me that the cause could be either (i) that air might be getting in through the join between the carb and the pipe leading into the engine or (ii) that the governor is not working properly.

I checked the faces of the carb and short pipe - they seem fine and, although the metal (?) gasket is also in good shape, I put in a "cereal packet" gasket as well and made sure that the bolts are tight. This has had no effect either way.

I think I now understand, from posts on this forum, what the governor is supposed to do and how it does it. All the moving parts seem to be in good shape and moving freely (I've added a couple of pictures) but the one bit which seems odd is the fine spring between the Throttle Lever and the loop on the Throttle Link (I'm using the names from the Manual). It's got a plastic (?) plug in it which I've seen referred to on the Forum (but I can't remember where!) and it doesn't appear to be stretched or distorted. I can see that it's vital in transmitting the "pull" from the hand-lever to the carb spindle, and brining the governor blade forward at the same time, but it doesn't seem to have much "power"; indeed, there seems to be quite a lot of movement on the hand-lever required before anything happens to the carb spindle.

I haven't tried hooking the spring further back on the Throttle Lever (it's now in the middle of the three holes) but even if that improves the responsiveness down through the line I don't understand how/why it would overcome the original problem of the surge in the revs from shortly after take-off.

I'd be very grateful for some advice; this is, otherwise, a splendid mower! Thanks. 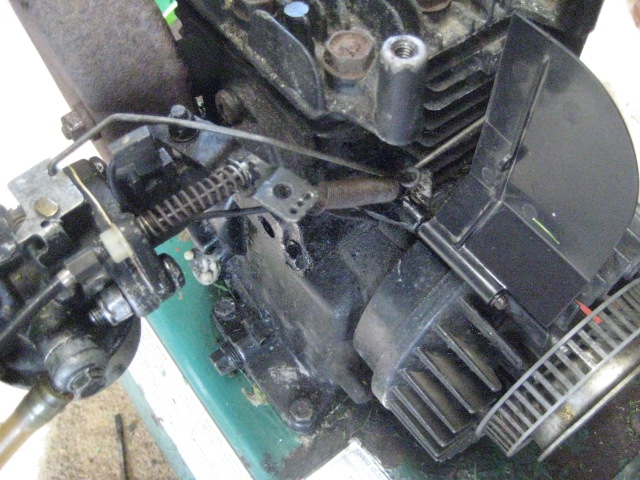 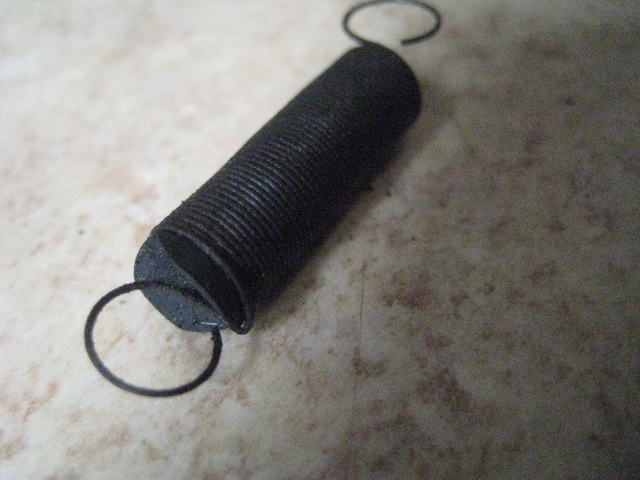 My task of trying to control the revs on this engine is going backwards! - now I can't get it to start and I've fiddled about with the carburettor to the point where I can't find my way back to Square One! Can you help me with some basic questions?

1. What is a "starting point" position for the idler jet screw? How many turns out from fully in would, at least, get it started?

2. Would you expect that any movement, in either direction, of the hand throttle lever directly results in a similar movement of the plate at the top of the "butterfly" spindle? My doesn't; I can push the lever way past half-way before I see any movement of the spindle. It seems that all the movement of the hand lever is absorbed by the stretch of the thin spring connecting the Throttle Lever and the loop on the Throttle Link ( - this is the correct location for the spring?! - it seems such a weak stretch that I did wonder whether the link/governor end was connected to the right point; there's a lug on the face of the blade which would certainly stretch the spring tighter and doesn't seem to be doing anything else.)

3. If this lack of connection is a problem, what could be causing it? I've cleaned the blade and the spindle and there's no resistance there. The "butterfly" spindle shuts quite smartly on its own - but it's not strong enough to shut, clockwise, when it's attached to the Throttle Link and it means pushing back the blade.

(The only thing I've done to the spindle is wrap a couple of turns of plumber's tape around the top to make the cloth (?) gasket fit more snugly. This was when I was trying to find places where unwanted air could be drawn in, and the engine has run since I did that!)

I really would appreciate some guidance!