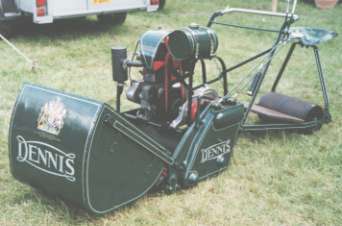 The original Dennis motor mower was introduced in the early 1920s to meet demand for a high quality machine to mow sports grounds and municipal parks.

The first design was a moderate success and a number of mowers were sold.

In 1927, Dennis introduced the 'Z Type', which was to become one of the most successful motor mowers ever made. The mower continued in production for many years with only minor modification, and Dennis machines produced in the 1960s still retained a marked similarity to their predecessors.

Like many lawn mower manufacturers of the 1920s, Dennis had come to prominence in other industries during the First World War. The company had become well known as a producer of commercial vehicles, such as buses and lorries. It is likely that mowers were initially produced to utilise some of the production capacity that had become available following the 1918 armistice, although the mowers soon became a successful part of the business.

The Dennis had a very distinctive design. The machine was large and had a more squat appearance than, for example, the Ransomes or Atco machines of the same cutting width. The early machines represented the latest technology in mower design and owed much to the manufacturer's experience in the automotive business.

For the majority of the years up to 1960, the mower was powered by a large Blackburn engine. This single cylinder four stroke unit gave the Dennis a distinctive sound and provided enough power to drive the mower easily for a full day without overheating or undue stress. Because the engine worked well within its capability, the mower was very reliable and this explains why Dennis machines were so popular with the professional groundsman. Later power units were also very reliable, but none seemed to have the same character of the Blackburn.

Another peculiar feature of the Dennis mower was the use of two separate starting handle positions. In cold weather, the handle was inserted into a hole so that it turned the engine slowly to aid starting. In warm weather, or if the engine was warm from previous use, a different hole was used which engaged the handle at a different gear ratio in order to turn the engine over more quickly and help it start more easily.

Over the years, Dennis mowers have been used at some of Britain's best known sporting venues, including Wembley Stadium, Wimbledon's All England Tennis Club and Lords Cricket Ground. Many are still in use at local sports grounds and village playing fields around the country.

Although no longer made by the original company, Dennis mowers remain in production. They are still a marque of quality.