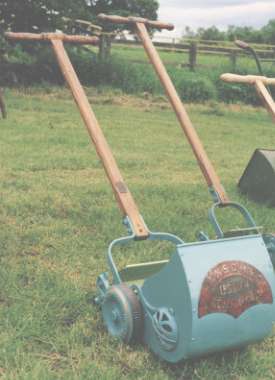 The Anglo Paris was a pretty sidewheel lawn mower introduced in 1892 by Ransomes, Sims & Jefferies. The mower replaced an earlier design known as 'The Paris' that was made by Ransomes for sale in France during the 1880s.

Like most side wheel mowers produced in the UK, the Anglo Paris was sold as a less expensive and easier to use alternative to the heavier roller mowers such as Ransomes' own Automaton range.

By the time of the First World War, a modified version known as the Anglo Paris No 2 had been introduced in sizes from 6 inch to 20 inch cutting widths (in steps of two inches). Prices in 1915 ranged from £1.10.0d (£1.50 in decimal) to £4.5.0d (£4.25) for the larger models. As with most mowers of the time, the grass (catcher) box was purchased separately for an additional price. Production continued in to the 1920s when the design was finally superseded by Ransomes other sidewheel designs such as the Lion, Cub and Lioness.

The 8in, 10in and 12in models are the most common. Examples of the 6in machine and the wider models are more unusual. Models of 10in cut and above were fitted with a 6-bladed cutting cylinder (reel). Smaller models had five blades. 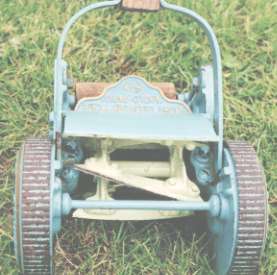 One unusual aspect of the Anglo Paris is its distinctive blue colouring. As far back as the 1880s many manufacturers had already standardised on the traditional red and green colour schemes. The market was very competitive at the time and there were many manufacturers. It is likely that the Anglo Paris was given its unusual colour as part of an early marketing or branding exercise. It certainly makes them stand out from other mowers of the time.

The Anglo Paris is popular with collectors and a number of examples are owned by members of the Old Lawnmower Club. However, the mower is not as common as other models made by Ransomes during the same period or similar machines made by rival manufacturers.