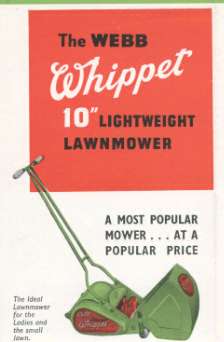 Webb's Whippet was a low cost roller mower for the domestic or home market manufactured from the 1930s until the 1970s. Although not generally acknowledged as a classic design, the Whippet was nevertheless a popular machine as demonstrated by its longevity.

The design of the Whippet was very simple: plate side frames formed a chassis to support the steel roller and cutting cylinder (or reel) with a simple roller chain drive enclosed by a flat cover. The lightweight frame was made from pressed steel to simplify manufacture and keep costs low. According to Webb's own literature the Whippet weighed just 39lbs (approx 17.7kg), which was less than similar models made from cast iron. 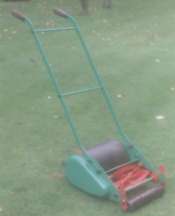 Henry Webb and company began to manufacture lawn mowers in the late 1920s, initially producing a sidewheel model. The company always designed its products for the domestic user, with a solid range of value for money products that found a loyal customer base for almost half a century. The Whippet was part of a range that included models such as the Wasp, Witch and Windsor.

The company became part of the Wolseley Hughes Group in 1963 which was itself absorbed in the Qualcast Group in 1984. The Webb name has now disappeared following further changes in the Atco-Qualcast Group.

One of Webb's most unusual models was a toy mower manufactured in the 1950s for children to a design based on a conventional machine. These 8" cutting width mowers are often confused with the real thing but were never intended to cut grass. They are popular with lawn mower and toy collectors alike.