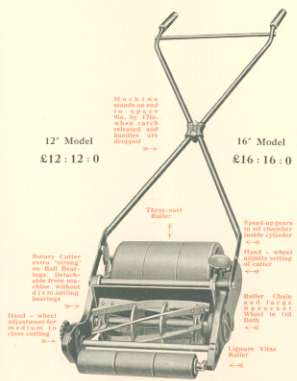 The JP Super is another design classic and one of the most famous of all lawn mowers. It was introduced in the 1920s and continued in production until well into the 1950s.

The mower was made by a company formed by two engineers named Jerram and Pearson (hence the name) in Leicester, England in the years immediately after the first world war. The company prided itself on the quality of its design and engineering and JP mowers were known as the "Rolls Royce of Lawnmowers". In fact, the two companies did have links through other engineering interests.

When the JP Super became available in 1920 it was an instant hit. The extensive use of aluminium and alloys in the JP Super was a revelation in its day. The company's brochures proclaimed the virtues of the nickel steel, steel drop forgings, pressings and aluminium alloys they used that were to "Air Board Specifications". In the 1930s, they claimed that "metals employed in making JP Super lawnmowers are largely the same as used in British Schneider Cup machines", this being the series of races for aircraft held in the 1920s and 1930s. 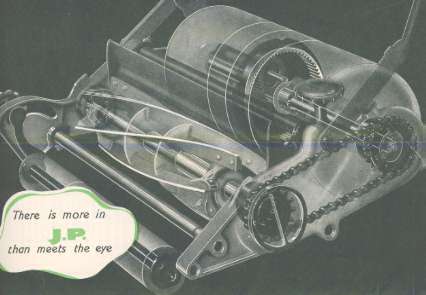 The mower also featured a number of design innovations. For example, it incorporated high precision components, especially in the epicyclic gearing, ball bearings and roller chain that transmitted power from the rear roller to the cutting cylinder inside a heavy aluminium casing. This was at a time when many rival products were still utilising cast iron sprockets and block chain, a concept dating back to the 1850s. 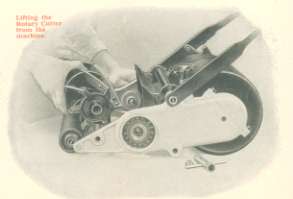 Another innovation was the quick release mechanism of the cutting cylinder. By simply undoing the large nut on the side of the mower, the cylinder could be released without removing the chain or sprockets. This simplified maintenance and repair. The idea has been copied many times by other manufacturers, but never bettered.

All of this engineering made the JP Super a high quality machine, but also very heavy and relatively expensive. The company itself admitted that the "cost of these materials alone is, in many cases, more than the entire cost of cheaper and so-called competitive machines".

Nevertheless, the JP Super was a success. It was available in 12" and 16" cutting widths although the smaller model was by far the most popular.

Many JP Super lawn mowers are still in regular use and the Old Lawnmower Club probably receives more letters and emails about these machines than any other. It is quite ironic that one of the more expensive mowers of its time is today one of the easiest to find.