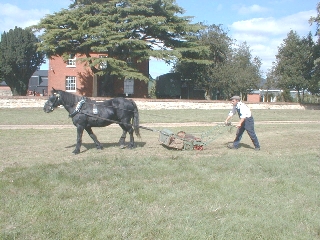 Before the invention of the motorised mower, whether steam or petrol powered, the only way to cut a large area of grass was to use a pony or horse drawn machine.

These mowers were often little more than scaled up versions of the hand mowers made by the same companies. The pony pulled at the front and the operator normally walked behind, although a few designs provided a seat above the rear roller. In theory it should be possible for one person to control the mower and the pony but most contemporary photographs show a second person, often a boy, possibly the gardener's apprentice, walking alongside the pony to guide it. The pony often wore leather boots or slippers to prevent hoof marks on the lawn.

Most of the well-known manufacturers produced pony or horse drawn mowers but probably the best known was Alexander Shanks and Co of Arbroath, Scotland. This company had produced the first horse drawn mowers in the mid-19th century and they were immediately popular, especially on the growing number of golf courses and other sports grounds that were being built at the time. Some people believe that this is the origin of the term "Shanks's Pony", meaning to walk, but no definitive source of the phrase is known. It certainly makes sense if one takes the phrase to mean "having a pony but still having to walk". 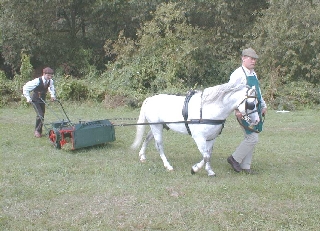 Pony and horse mowers continued to be popular for many years after the introduction of the steam and petrol powered mowers. Many were still in use up to the 1940s although after the Second World War the motor mower had replaced most of them, especially in Europe and North America.

However, it is still possible to see mowers of this type, even the original machines, working in places such as India where they are pulled by oxen.

Pony and horse mowers are popular with collectors although they are of course too large for many people to store. For this reason, the best place to see one working is at a museum or a special event.