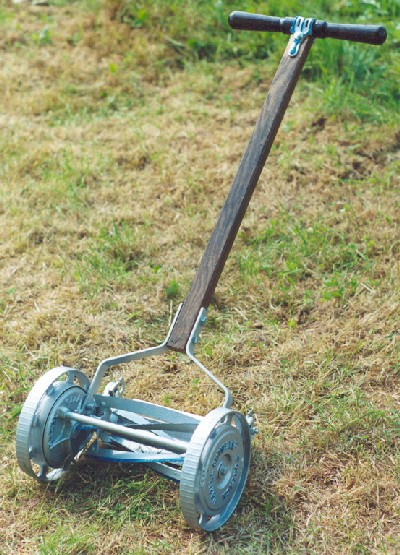 The Cutwell side wheel mower was sold in the UK in the 1920s and 30s and was manufactured by the Germany company Brill.

However, it would be difficult to tell where it was made by looking at it because, like many overseas products of the period, it was simply marked "Foreign". There are various reasons for this. Up to this time most mowers sold in the UK were either British or American and customers tended to buy products made in these countries. Import and export restrictions were imposed from time to time and this led to confusion in the marketplace. Marking a product as "Foreign" may have been an attempt to confuse the customers. And of course in the 1920s, with the Great War less than a decade beforehand, many people in the UK were reluctant to buy from their most recent enemy.

Despite this Brill was an established company with a good reputation by the 1920s. The company was formed in 1873 and manufactured a range of garden equipment including lawn mowers.

Like many companies of the period Brill seems to have manufactured mowers that were sold under a variety of other names. In the UK, for example, mowers such as those sold with the Jestimah and Lewis names appear to be identical to the Cutwell except for different wording on the wheels. The casting numbers on all other components are exactly the same on all these mowers. Other examples of "Brills in disguise" have also been found. Brill may have been more inclined to manufacture mowers for other companies, a practice now known as "badge engineering", because of the reluctance of customers to buy overseas mowers. In these cases the name of the seller may have been better known and hence more acceptable to potential buyers.

The Cutwell was a nice if typical example of a sidewheel of the period. Like most contemporary mowers it was manufactured from cast iron with steel blades and a wooden T handle. Unlike most British sidewheel mowers of the same era, the Cutwell was designed to deliver the cuttings to the rear of the machine where they could be caught by a box or bag suspended on hooks on the rear end of the side frame. Although some British mowers were designed like this the rear mounted catcher is more often found on American machines.

Another unusual feature of the Brill Cutwell is its colour. Almost all British lawn mowers were painted green and red (there are exceptions, of course, including the Ransomes Anglo-Paris and Drummond Willing Worker) but foreign manufacturers seemed much more inclined to use bright colours in attractive combinations to show off their wares. The Cutwell, for example was painted silver and blue. The use of colours other than green and red was most often found in machines manufactured in the USA.

Unlike many of the manufacturers featured in our "Mowers of the Month" Brill is still in existence and continues to make good quality mowers and other gardening tools. The company is also one of very few in Europe to manufacture a hand operated sidewheel mower. Examples of the Brill Cutwell (and identical mowers with a different name) are relatively unusual compared with mowers made during the same period by Qualcast, Ransomes, Greens and other leading British manufacturers. 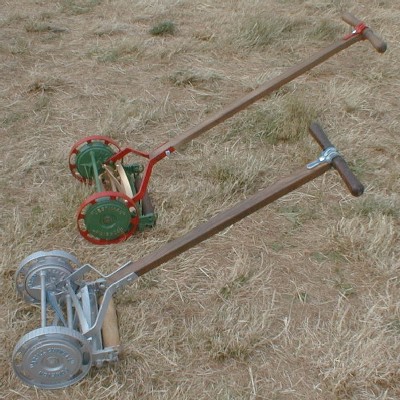