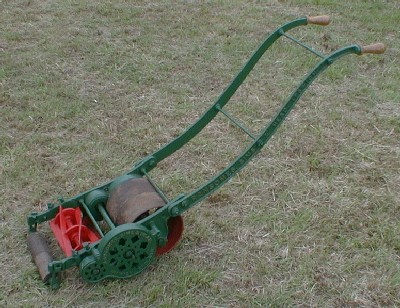 Introduced in 1867, the Automaton was Ransomes’ answer to Green’s Silens Messor, already established as the most practical mower on the market. Green’s used dog Latin (giving a mower a name at all was a novelty at the time), so Ransomes went one better and used Greek, albeit a Greek word already accepted in the English language.

The great feature of the Silens Messor was its chain drive. While Green’s still held the Patent for this, Ransomes stuck to gears, but placed the first pair of gears inside the frame, and enclosed the second pair in a simple, tapered guard pretending (to the short-sighted) to be a chain.

Ransomes made a virtue out of the presence of gears in their contemporary advertisements, claiming that "the best and simplest plan of communicating motion to the knives is adopted, viz, by accurate MACHINE MADE GEARING [their own capitals], which is far superior to chains and other methods, as whilst almost noiseless [the major promoted benefit of the Silens Messor], it is not liable to get out of order. There was a debate at the time over the merits of chain and gear drives although in time most of the major companies came to offer variants of their mainstream designs with a choice of either mechanism.

The Automaton was a great success, selling ‘upwards of 1,000’ in the first season, 1867. About 1880, the faux-chain was replaced by a close-fitting and ornate overall cover for the two outside gears. Other variations include the moving of the first gear (on the roller shaft) from the left to the right hand side, and the use of sheet iron or cast iron for the delivery plate. In 1885, the New Automaton appeared, a completely new design.

The Automaton was available in cutting widths from 8" to 20" in 2" steps. In about 1870 the smallest machine "suitable for very small lawns" was priced £2-15-0 while the largest "to be used by a man and boy" (one towing, one pulling/steering) was priced £8-0-0. The company also offered a horse-drawn variant with 36" cutting width priced £24. 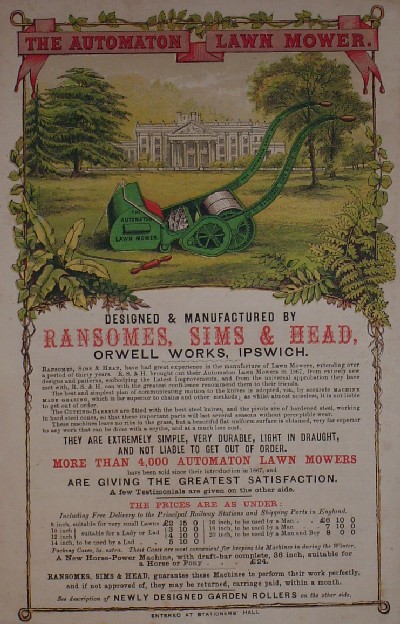 Examples of the Ransomes Automaton are extremely unusual and highly prized by collectors. As with all mowers of this age, the smallest and largest versions are less common that the intermediate sizes. Later versions including the "New" Automaton and especially the "Patent Chain" and "Patent Gear" Automatons are more common.

Information and words by Christopher Proudfoot.