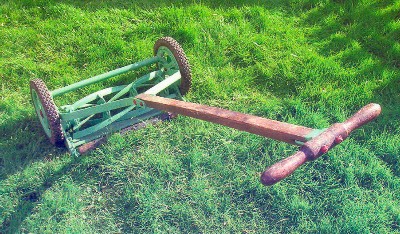 The story of the American Eclipse Company starts with Fred Adams, an Illinois farm boy who later trained as a jeweller. Fred conceived the idea of a self-sharpening lawn mower way back in 1900 and the following year went on to found the Eclipse Company in Prophetstown, Illinois. The company had made a sidewheel "Lady" mower from the very early days of its existence, alongside a wide range of very similar sidewheel machines. Moving with the times the company was to produce in the 1950s a wide range of powered machines as well before being taken over by Hahn in 1960. 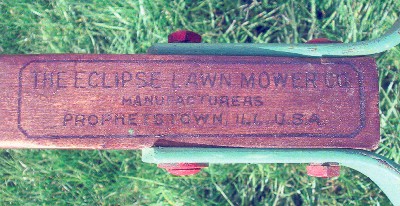 The "Lady" illustrated is in fact not one of these early mowers but a post-1945 import (to the UK) which utilised many of the components of the earlier machines. The rubber-tyred wheels are a bit of a giveaway really but generally this later Lady follows the traditional pattern set by the company all those years ago. This particular example was bought from a scrap dealer at the annual Farm Machinery Preservation Society Show at Gosfield, Essex in 1998. It is interesting that the words on the handle still state "With Adams Sharpener". Because these were largely illegible when the owner bought the mower he spent some time looking for a character called "Will Adams-Sharpener", which only goes to show how easily one can be led down blind alleys. Eventually he was to carry out some useful correspondence with the librarian of the Henry C Adams Memorial Library in Prophetstown who supplied him with one of the firm's salesman's catalogues. 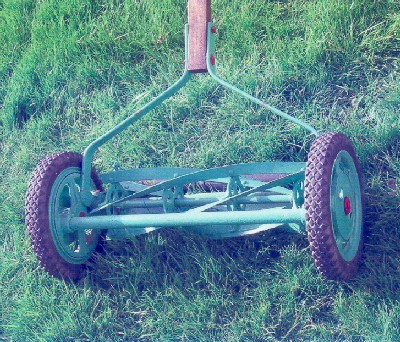 Words and images by Christopher Thompson.