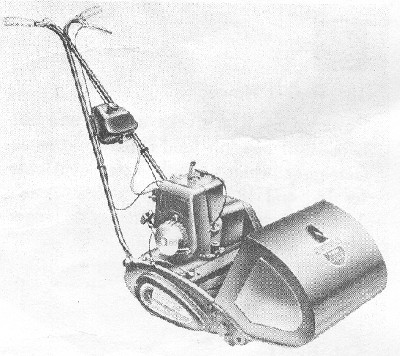 The Suffolk Colt was introduced in 1959 and went on to become one of the most popular motor mowers of the 1960s. Many thousands were produced and plenty are still in regular use.

The design of the Suffolk Colt was very similar to the earlier Suffolk Punch although it was smaller and more compact. Both machines had a number of features in common, including almost identical versions of Suffolk's own 75cc four stroke engine. This engine (designated the 75G) was produced in a number of different variations (and in larger capacities) for use on motor mowers from the 1950s through to the 1970s and it proved to be a very reliable power unit. Suffolk was probably the last major UK lawn mower manufacturer to use its own engines and over two and a half million units were made by the company. Most other companies used engines produced by one of the major manufacturers such as Villiers or JAP.

The Colt was available in 12" cutting width. Conventional motor mowers are rarely narrower. It was a very compact design which made it ideal for smaller lawns in an era before electric power was available or accepted by the market.

The design was unusual in that it incorporated three separate clutches. The first is a basic hand-operated "dog" clutch on the main drive shaft. This was to engage and disengage the main drive to the cutting cylinder and rear roller. It was normally disengaged when starting to make it easier for the engine to pick up speed. The second clutch was a centrifugal clutch, also on the main drive shaft, that only engaged when the engine speed exceeded a predetermined limit. This removed the need for a clutch lever or cable and helped make the mower easier to operate. For example, when the mower came to the end of the lawn the clutch could be disengaged by simply slowing the engine down using the throttle lever. The drive would disengage automatically so that the operator could turn the mower or manoeuvre around the lawn. The third clutch was on the end of the rear roller and could be disengaged independently so that power from the engine was only transmitted through the cutting cylinder. This allowed the mower to be used in confined areas where the user wanted to have powered cutting but without any forward motion on the mower. This was not a new idea (many earlier motor mowers had similar devices for separating power to the cutter and roller) although it was unusual on such a small machine. Suffolk often referred to this ability to disengage the rear roller as "dual drive", as explained in their sales leaflets:

Many Suffolk Power Mowers now incorporate the dual-drive device. In effect, this is an auxiliary clutch enabling the user to disengage instantly the drive tot eh rear roller. This allows the machine to be operated at any speed with the power still connected to the cutting cylinder. The user can thus move the machine slowly round cut-out lower beds, trees, shrubs, etc in fact in any confined space without hurry or trouble. It can be re-engaged in a matter of a second or so. One outstanding virtue of any machine fitted with the dual-drive is that it gives unlimited cuts per foot when operated without the rear roller driving. This enables the user to obtain a super fine finish on his lawn whenever desired.

The Suffolk Colt was produced right through the 1960s and into the 70s more or less unchanged. After this the design was changed gradually and later models while bearing many similarities to the original machine often had slightly different names. The main examples of this were the Super Colt and Super Punch models.

Many examples are still in use today and this tireless "workhorse" continues to be a very practical machine. A few collectors specialise in them but values are not very high because examples can still be found easily.

One confusing aspect of the Suffolk Colt (and other Suffolk mowers for that matter) is that the name plate includes the wording "Suffolk Iron Foundry (1920) Limited". Some people assume this refers to the date the mower was made but it is simply the legal name of the company.

Like other Suffolk mowers the Colt was made in the company's factory in Stowmarket that is now the main manufacturing plant for Atco-Qualcast. All three companies have been part of the same multinational organisation for some years.