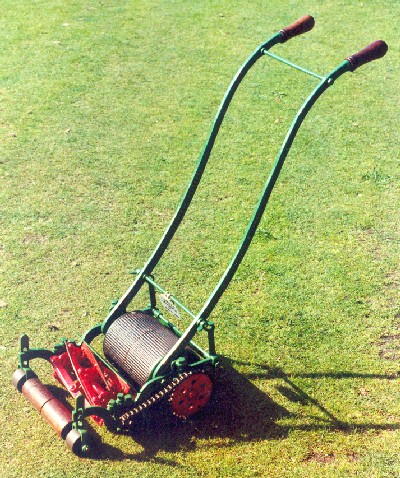 The Caledonia was a popular hand mower manufactured by Alexander Shanks of Arbroath. It was available in gear and chain drive versions, as were similar machines from its main rivals Greens and Ransomes.

The gear version of the Caledonia was introduced in 1895 and the chain drive model around five years later. The chain drive model was one of the first hand mowers to feature "roller" chain (like the chain used on modern bicycles) rather than the earlier block chain. This placed the company some way ahead of its main competitors who retained block chain on the Ransomes Automaton and Greens Silens Messor ranges for some years. 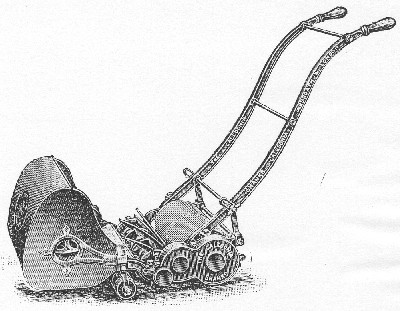 Another innovation on the Caledonia was the addition of a small spring on the bracket that supported the rear roller. The idea was for the chain to absorb some of the vibrations that occur as the mower moves across the lawn. Shanks patented this mechanism in 1894 (primarily for its larger pony and horse drawn mowers) and it was applied to a number of roller mowers across their range for some years.

Like all contemporary machines the Caledonia was manufactured from cast iron. The castings were less bulky than those found on similar machines from other companies at the time and this made the Caledonia a lighter machine overall. Many of the designs featured a ribbed rear roller that was presumably designed to provide better grip on the turf so that more power would be transmitted to the cutter. 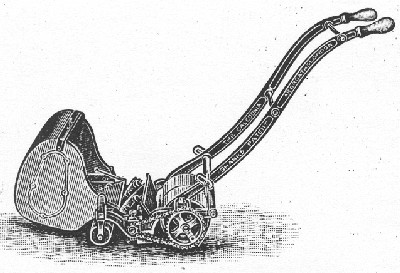 The Caledonia was available in 10, 12, 14 and 16 inch cutting widths and was mainly aimed at the middle and upper end of the domestic market. However it proved so popular that Shanks also produced 14 and 16 inch versions for the lucrative green-keeping market. These featured cutting cylinders with an additional blade (seven instead of six) to ensure more cuts per inch as the mower moved across the lawn.

As with all mowers from this period there were a number of subtle design changes over the years. Very early versions did not feature the spring on the rear roller bracket and some examples have a single, central, adjustable support for the handles whereas most have two supports, one at either end of the cross-piece at the lower end.

Despite being a very popular machine at the time relatively few examples of the Caledonia appear to have survived, certainly when compared to variants of the Ransomes Automaton and Greens Silens Messor machines (although both of these were in production for longer).