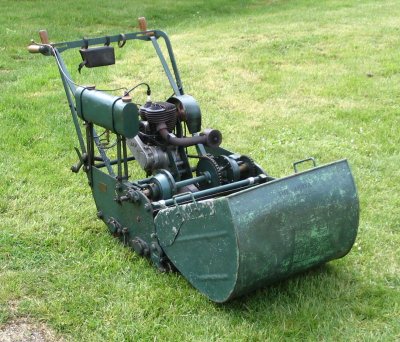 The Godiva is another example of a motor mower made during the 1920s by a relatively obscure company. During this period a number of companies experimented with lawn mower production, anticipating new markets or perhaps to utilise skills and production capacity developed during the First World War.

The Godiva is an unusual machine because it can be traced through at least three different companies. The original machines were made by a company called Nene Engineering which was based in Peterborough (this company was itself a spin off from the Barford & Perkins company) from 1920. This company was not successful and the design and manufacturing of the mower passed to The Godiva Engineering Company of Slough. In time a third company, Allen & Simmonds of Reading, took over production. None of these companies was very successful and this is reflected by the number of machines that appear to have survived.

Although it was made by three different companies the design of the mower remained largely unchanged. The design was conventional for its time in that the engine was mounted centrally above the frame or chassis which comprised flat steel sides and tubular cross pieces. Superficially at least the Godiva is similar in appearance to mowers made during the same era by companies such as Ransomes, Shanks, Automower, Dennis, John Shaw and others.

The most distinctive feature of the Godiva is the petrol tank which has the appearance of a slightly flattened tube or cylinder.

There is some photographic evidence (but no mowers are known to exist) which suggests that the very early Godiva motor mowers may have had a slightly different design. 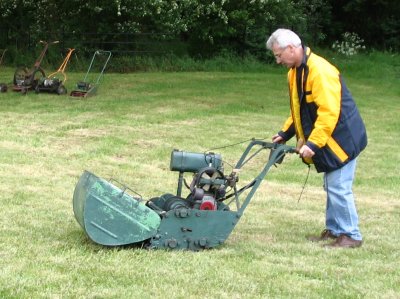 Godiva motor mowers are very unusual. One of the surviving examples was on display at The Old Lawnmower Club's Annual Rally at Milton Keynes in 2006.