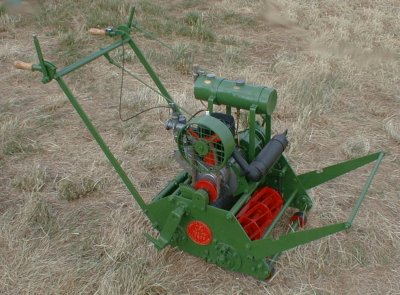 This Greens Light Motor Mower dates from the late 1920s to early 1930s although some of the features can be found on earlier models from the same manufacturer. The design was perhaps slightly behind its time during a period of rapid development across the industry.

Greens seems to have been much more conservative with its motor mower designs than many other manufacturers during the 1920s and 30s. This machine incorporates a number of features that could be found on machines ten years earlier and which had been largely superseded on more modern mowers. For example, this mower still has the square bracket for supporting a suspended grass box at the front. Indeed, the box itself (not shown in these images) was the same wooden sides with corrugated metal skin type that was used on the Silens Messor mowers for the preceding 50 years. Virtually all other manufacturers had switched to a "cantilever" mounting where the box was supported by brackets or hooks on the main chassis by the beginning of the 1930s.

Despite similarities with earlier designs the Light Motor Mower also had some modern features. For example, its frame was made with sheet steel sides supported by tubular cross pieces. Frames like this were used by almost every major manufacturer from the early 1930s onwards. And like earlier Greens motor mowers, the Light Motor Mower had a kick start mechanism, mounted on the end of the main drive shaft with a pedal that folded away when not in use.  Only Atco of the other main manufacturers had kick start as a standard feature on its mid range domestic machines - but not until the mid 1930s. 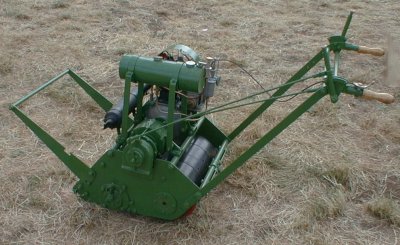 Greens motor mowers from the period before 1945 are generally much less common than similar sized machines from the other principal manufacturers of the period, namely Atco, Ransomes and Shanks.