If you're looking for a special  gift for the lawn mower enthusiast in your life, we'd like to suggest something from our selection of gifts and souvenirs....

Club Souvenirs: a selection of clothing such as sweat shirts, overalls and baseball caps that can be ordered from our club shop. Please order in good time to allow delivery.

Books: there is a surprisingly large selection of books about old mowers available nowadays. If you add in the books about antiques and gardening that also include sections on old mowers the choice is even bigger. Most of the books listed on our site are ordered direct from Amazon or the publisher.

Transfers/Decals: for the die-hard enthusiast we also offer a number of transfers (decals) that can be used to finish off their latest restoration project. Please order in good time to allow delivery.

Club member Roy Osborne is featured in the new edition of Best of British magazine, on sale from 1 August. Roy created a small museum at Copped Hall in Essex to display some of his collection. He tells us that it can be seen when the Hall is open on the third Sunday of every month whe. Roy will also be giving special talks about the mowers on 25 August and 13 October. Check the dates and times on the venue's website.

There are many other museums around the world that display old lawn mowers as part of their collections. You can see a list here.

For English and Australian fans, cricket doesn't get more exciting than the first day of an Ashes Test Series. In recent series (in England and Australia) we have seen the home side winning and it's now been 18 years since Australia won the Ashes in England. Over the next few weeks we'll find out if this home advantage can be broken. Before a ball is bowled it looks like it could be close but cricket has a way of throwing up surprises. Good luck to both sides - with members in both countries (and other cricket-playing countries) we can't be too partisan, but... 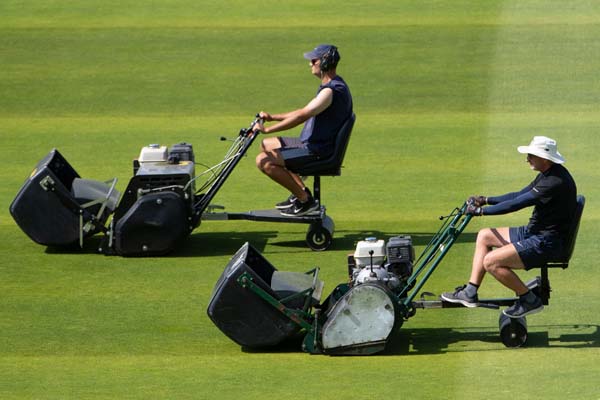 The lawn mower - it could be argued - played a significant role during the 19th century in the development of all major sports - including cricket - played on grass because it enabled clubs (and their ground keeping staff) to prepare the surfaces more easily and quickly. Lords - the home of the MCC - claims to have bought its first mower in 1864 to remove the "necessity to keep sheep!" and the same year they relaid the field. All first-class cricket clubs and countless non-league, town and village teams all around the world still rely on their mowers to help them prepare their grounds for their games. How much of this would be possible without the invention of the lawn mower?

Visitors to our website can now access our online Directory of Manufacturers and Models. This directory was originally created as a printed booklet by one of our members some years ago. The objective, then as now, was to compile a comprehensive reference list of mower manufacturers and the models they produced. It's been updated many times as newly-discovered models and manufacturers have been unearthed and added to the list. We know there are many gaps to fill in terms of missing companies or machines or additional information about existing entries. It's still a work in progress.

There are some simple rules for items to be included: one of our editors must have seen either an actual example of a mower or a published reference (such as a photograph, advert or editorial) about a company or one of its models. We'll be happy to add or amend entries when we receive information that meets these criteria. Mowers made after 1970 are generally not included.

The Directory was transferred from a printed to online version a while back but access was restricted to full members of the Old Lawnmower Club. However, we have now decided that this valuable reference resource should be made available for everyone.