Tonight we should be beginning to gather at Milton Keynes museum for the annual rally.

What are you doing instead?

Tomorrow I'll be digging out my 24" Atco Standard that originally worked for my local Cricket Club.

Sunday after breakfast, I'll be taking a look in the primary store and will photo a few of my favorite machines with local histories.

Have a great rally weekend whatever you are doing

Hi Andrew, I'll dig out some more mowers and perhaps ( rain permitting) have a small virtual display of my own  I'll post up later. All this whilst accepting three more mowers into my collection. One of these mowers has been the most unbelievable journey to finally secure it. I'll post up photos of it and attempt to tell the story of how I eventually obtained it. I'd love to see some photos of your mowers. Thanks Sean

Hi Andrew. I shall be deciding which couple or three of my push mowers to move on and making a list of what I want to keep out of my old mower brochures, adverts, parts lists etc as they need thinning out. Might have to do some of it on Sunday as my football team, Leeds United are playing on Saturday afternoon so I need to keep an eye on our score!! Enjoy your weekend and hopefully we can all enjoy a get together later in the year.  Cheers. Rob

Part of my usual AGM ritual is to collect some mowers on the way, so it was poignant that on way back from collecting a mower in  Lincolnshire on Weds, my SatNav rather than taking me down M11 or A1, took me West to Milton Keynes & the M1. So I was there a couple of days early & it brought back some great memories of past gatherings.

Looking forward to hopefully making the journey again in Sept & seeing you all.

I will add the collected mower to the virtual rally later today.

Good morning Rob, I wish Leeds the very best of luck, I'm sure the other members on the Forum will be interested in seeing what lovely items you choose to move on.

It's a typically damp Saturday morning in Milton Keynes, glad I've not spent the night in a tent, but will miss all the chat and banter.

Yesterday I bought some frames for some mower posters that Clive kindly gave me, framed them up and are ready to be fixed to the walls of my mower garage . Once I've dried out from watching my sons football training, I will be having a play round there, moving stuff around and hopefully if it stops raining I will drag a few out to photograph. I would love to bring a hand full back and have a little display of my own on my lawn as where they're stored is concrete city, but the weather isn't great here. It might have to wait. Hopefully a get together later in the year will go ahead, and I can see some beauties up close. I'm crossing my fingers, as I'll be hearing from an organiser of an event close to home that may want a few of my collection displayed in August. Hopefully he'll allow me to bring a selection. Will keep you posted. Enjoy the rally weekend. Keep the photos coming on the virtual rally, Lee

Morning Clive, if only you knew how close you were to the majority of my machines as you passed down the M1, not been down for a few days will have a count up later.

Well, so far so good, first one turned up - lovely machine.one down two to go.  I'll put it on the Virtual Rally Forum tonight.

How dumb do i feel, i thought it was next weekend! I have been working non stop for the last 21 days so forgive me for not knowing where i am ( or sometimes who i am).

Had some mower action today, i have been on a mission from God (Clive actually but now hes a small screen star its close). Got a couple of lovely old machines to delivery next week to the Museum and hopefully bring some rusty old treasure home ( all thinly veiled as a roadtrip with my good lady).

Guess tonight i will just drink lots of beer at home and fall asleep on the sofa????. I may go fall asleep in my cold wet car to get the full affect lol.

Somewhere in here is the 1924 Atco Standard that I wish to bring to the Virtual Rally let's see what else we can see. 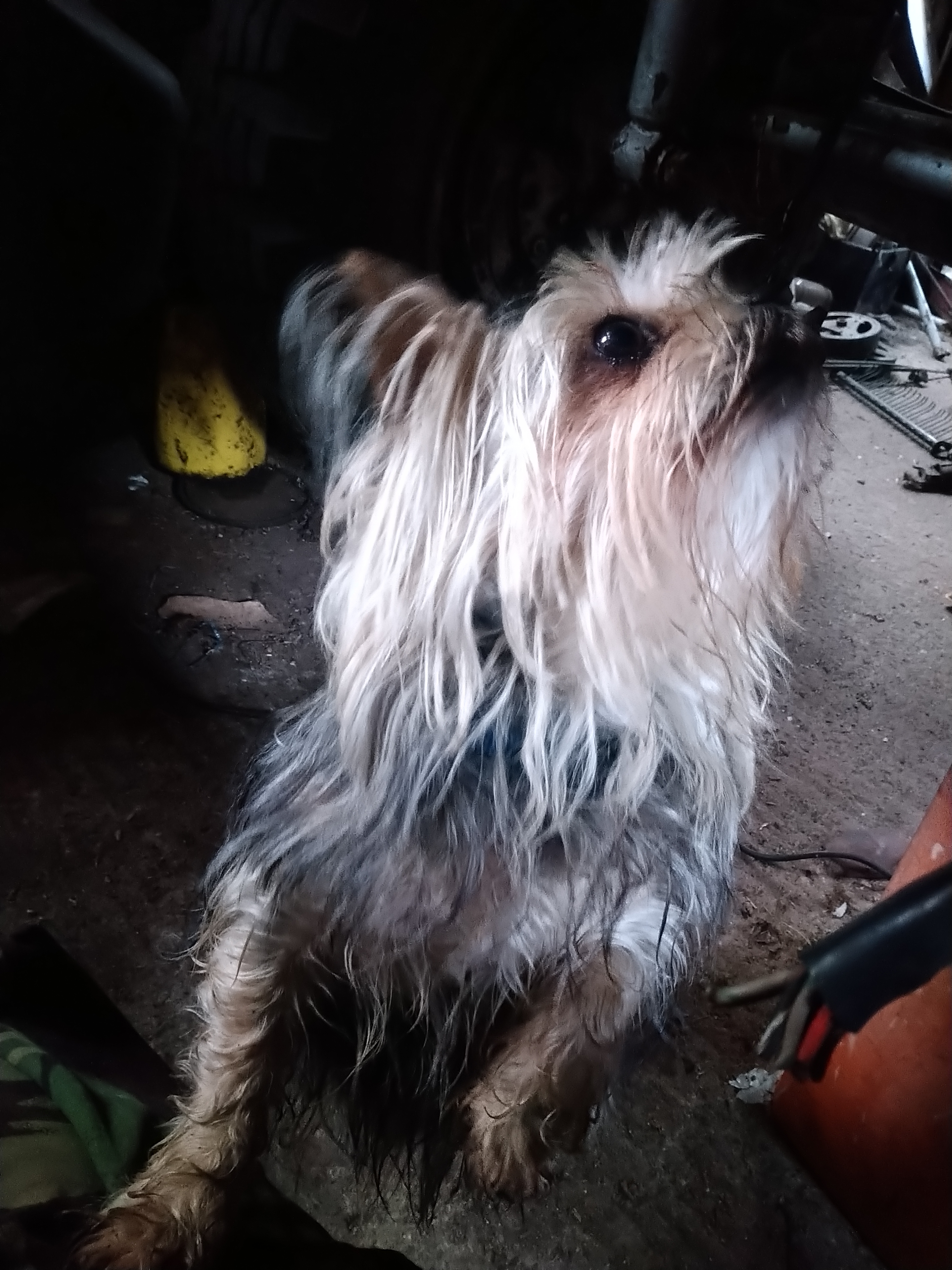 Mary has got the low down on our lovely days out, "would you like a day out in Derbyshire?" is generally followed by "what are you picking up"

So today is the day of the rally that might have been..hopefully all will be back to normal next year!

As for what I'm doing, currently busy moving a lot of mowers to another storage location, since one of the places I have been keeping them is due for demolition soon.

I've been tinkering with a 1920s Ransomes 16" with Blackburne engine, starts ok but was cutting out on acceleration, someone had jammed a tack down in the main jet of the Binks Style carburettor. Having taken the tack out, it now runs too rich to accelerate unless the fuel tap is turned off, when it runs and cuts ok for about 20 seconds!

The jets are not adjustable, there is simply a pilot and a main jet on the 2 jet carb and having run some numbered drills down to gauge the jet size can get a no 66 drill to run through which is over 0.030", whereas I feel that around 0.024" would be closer to the mark. The carb is not overflowing so the needle is seating and the float operates, no way of adjusting the float height. It looks like I may have to try soldering the jet up and re-drilling.

I've also been experimenting with a new 6 volt battery and second hand 6 volt Motorbike Coil on a 22" Standard, £15 spend to convert the flywheel magneto is cheaper than around £60-£70 on a new coil. I did do one where I obtained some bushes to sleeve the 7/16" shafted replacement coil up to 9/16", though that still costs over £30.

Well Ricky, drugs are smuggled in bags of flour,  so I am sure I can dismantle a mower or two & conceal in a some bags of compost, assume she doesn't carry a metal detector?

Andrew, now you give me the idea when its too late to hatch a cunning plan, anyway had the Old Warden mowers moved to a safe house as you seemed to be getting too close for comfort with your walks over that way.

What a beautiful start to the day in Milton Keynes today beautiful sunshine, just waiting for the Black pudding to finish then its full English breakfast, not quite the same when you have to cook it yourself, and none of your mates to share it with.

The myli the mower Hound will then need walking before going down to the yard to see what Gems can be sniffed out. Have a great day all.

Spent most of the day with my mowers, finally manage to extract the Atco from its resting place at the back of the shed, needs a good clean, but that will wait for another weekend. See 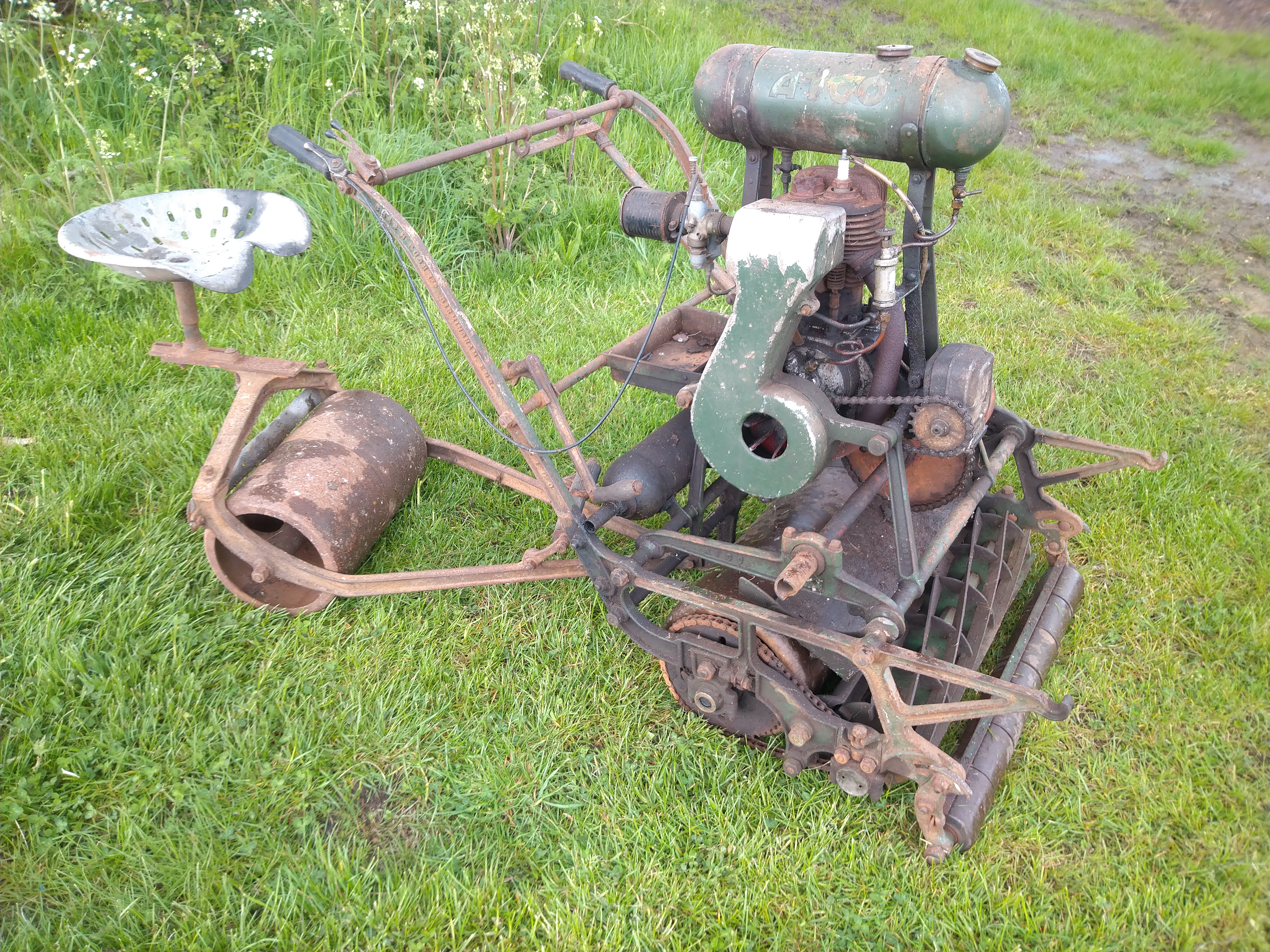