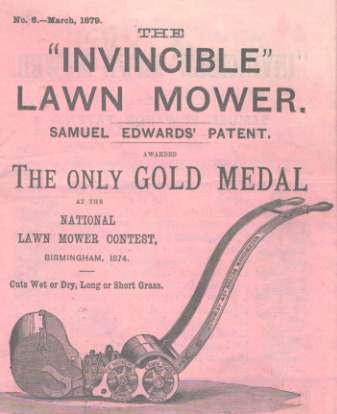 The Invincible was a hand roller mower manufactured between the 1870s and 1890s by John Crowley and Company of Sheffield, England.

The mower was similar in design to the more popular Shanks Caledonia, Greens Silens Messor and Ransomes Automaton ranges. Manufactured from cast iron the Invincible featured small gear wheels that transmitted power from the rear roller to the cutting cylinder or reel. This was a popular configuration in the early mowers before block and, later, roller chain became widely available.

One unusual feature of the mower was that the front wooden rollers could be relocated to the rear of the machine. The idea was to allow the cutting cylinder an unobstructed run, which was considered useful for cutting long or wet grass. Unfortunately there are no images of the mower in this configuration.

Like many mowers from this period the Invincible was available in a range of cutting widths, initially from 6in to 24in but later up to 42in. There is some debate over the use of the smallest mowers, some people believing that the 6in model was designed for working in confined areas such as graveyards or ornamental gardens where there were many narrow paths. Advertisements of the period suggest the mower is for small gardens. Just as likely is the idea that people bought the mower they could afford, the smaller models being the least expensive. In 1876 for example, the 6in Invincible was sold for 25 shillings (£1.25 in modern UK currency, approximately $2) while the 24in model cost nine times as much and the 42in model thirty times as much.

Many exhibitions, agricultural and other trade shows awarded prizes to various categories of machinery in the Victorian era. Winning models were often advertised on the back of their success and the Invincible was no exception.

According to Crowley's own advertisements, the Invincible won the First Gold Medal at the 1874 Birmingham Lawn Mower Contest. The mower also was a "winner of every medal awarded for lawn mowers in 1875", presumably meaning at the same event.

"Invincible proved the easiest to use and did its work remarkably well, making but little noise, and proved most satisfactory in the trial of various sizes", The Garden, 18 July 1874

"Invincible was the easiest to work and the cleanest cutter of its size and made, considering its cog action, very little noise," Gardeners' Chronicle, 11 July 1874.

"The lawn mower contest came off on Wednesday and excited so much interest that the assistance of the police was obliged to be called upon to keep the ground clear for the working of the machines and the use of the judges," Gardeners' Record and Journal of Agriculture, 9 July 1874.

The Invincible continued in production for some years and enjoyed many further successes in the competitions for which it was entered. The mower appears to have ceased production early in the 20th century.