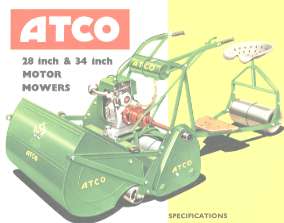 Atco is one of the most famous names in British lawn mower history. The company began manufacturing lawn mowers in the 1920s with a model that is now known as the Atco Standard.

The company was highly successful throughout the decades that followed, especially in producing quality, value for money machines for the domestic market and cost effective larger machines for professional use.

Atco always excelled in the simplicity of design. The early motor mowers pioneered the idea of mass production in the new mower manufacturing industry. Designing complete ranges of mowers around near-identical components, the company was able to simplify construction and service/support so that reduced costs could be passed on to customers. The formula was a great success, and the concept was still evident in the 1960s and beyond.

Mowers of this period still had the 'classic' Atco features: simple side-frames forming a chassis to support the mid-mounted engine; the familiar petrol tank mounted on the handlebars; the large capacity grass box.

In the 1960s, the range extended from 12in to 34in models. The 28in and 34in models were almost identical, each having a four stroke Atco Villiers Mk25 petrol engine cooled by a fan and cowling assembly. Both were available with trailed seat to allow the gardener to ride behind the machine, essential for jobs that involved cutting large expanses of grass. Fuel consumption was between 1.75 and 2.00 pints per hour.

Mowers from this period are still in regular use, testament to the quality of the manufacture and the dedication of their owners. They are also becoming popular with collectors, many of whom can remember the mowers when they were new.