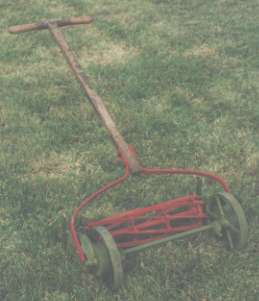 The New Royal was a sidewheel mower produced by Thomas Green & Son of Leeds from the beginning of the 20th Century to the end of the 1930s.

Greens was one of the leading manufacturers of the 19th and 20th centuries. The company produced its first mowers in 1855 but established its reputation with the Silens Messor range of hand, pony and horse powered mowers that was introduced in the 1860s.

The New Royal was introduced in the late Victorian era and was designed to replace the company's Royal sidewheel that had been in production for the previous 20 years.

Like many sidewheel machines of the period, the New Royal was available in two slightly different versions - the conventional model and 'High Wheel' models. 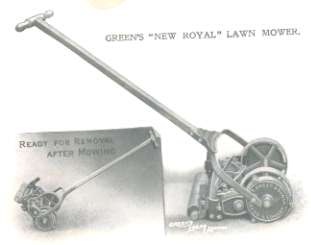 The two were generally the same but the 'High Wheel' model had larger diameter sidewheels. The primary effect of this was to enable higher gearing between the sidewheel and the cutting cylinder (reel). This meant the mower was more powerful and could be used with a wider cutting cylinder with blades. It also allowed the mower to be used to cut longer grass. 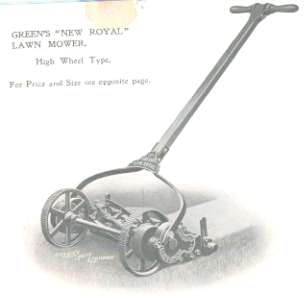 The New Royal was still listed by Greens towards the end of the 1930s but by this time the mower was quite old fashioned compared with the mowers developed at that time.

Today, it is unusual to find examples of the New Royal although a few examples can be found in museums and private collections.