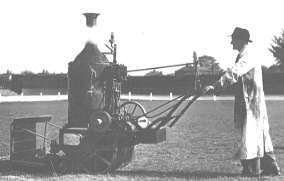 The Leyland was one of the first motorised lawn mowers. It was produced for just a few years at the end of the 19th and start of the 20th centuries.

Before this time, small mowers were pushed by the operator. Medium sized machines relied on two people (one pushing, one pulling). The largest machines were pulled by ponies or horses or other types of animal.

Keeping a pony or horse to pull the mower was not always practical or economic and by the end of the 19th century a number of designers were looking for a mechanised solution. Small but powerful steam engines were available at a reasonable price and it was only a matter of time before someone tried to produce a steam powered mower.

That person was James Sumner of Leyland, Lancashire. In 1893 he designed the world's first practical steam powered lawn mower. The design was modified in the next few years although there is very little evidence that many examples were ever made. One that does survive can now be seen at the University of Reading. 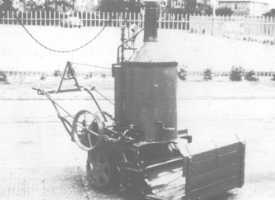 The mower was little more than a horse mower with a steam engine mounted on top and a simple arrangement of gears to transmit power to the rear roller. Unusually for the period, the engine was fuelled by oil rather than coal.

In theory the steam mower offered a number of advantages. It could be operated by one person and did not need to be sheltered and fed like a horse or pony. It was suitable for large areas such as sports grounds but was expensive to buy and difficult to operate.

Alexander Shanks of Arbroath and Thomas Green of Leeds produced rival steam powered mowers soon after the Leyland but none of these machines was a commercial success. The introduction of compact internal combustion engines at the start of the 20th century provided mower manufacturers with a more convenient power source. When Ransomes produced its first petrol engined mower in 1902 it signalled the end of the brief steam mower era.

Steam mowers are extremely rare. Apart from the example at the University of Reading no others are known. There is a replica of this mower in a museum in Coventry made by British Leyland apprentices some years ago.