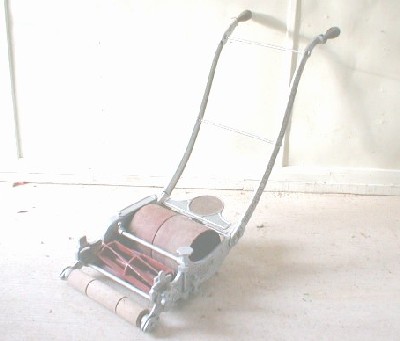 The Willing Worker was a hand operated roller mower manufactured by Drummond Brothers of Guildford in Surrey. The company was better known for its machine tools and engineering lathes but, like many similar companies during the "inter war" years, turned to other products at the end of the First World War.

The company introduced the Willing Worker in 1923 and the mower was available in 10" and 12" cutting widths. In some ways the design was outdated and the frame was manufactured from cast iron which made it rather heavy. Nevertheless the design also featured gears between the rear roller and cutting cylinder that were enclosed in an oil bath. While not completely innovatory this was still more advanced than the open chain or gear drives still employed by many manufacturers of the period. 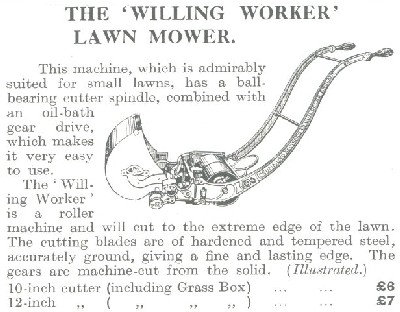 The early Willing Workers were painted green although models produced from the mid-1920s onwards were painted silver. The mower had not been a success and the company hoped the colour change would boost sales by making the mower appear lighter, easier to use and more modern.

Drummond introduced a modified design in 1926 using some aluminium components to reduce the machine's overall weight. This machine, known as "The Ladies" model, is much less common than the earlier design which continued in production alongside its smaller companion.

The company also introduced a motor mower in 1926. This was basically an enlarged version of the hand mower with a simple four stroke engine.

Drummond ceased mower manufacture in the mid 1930s although the company continued to produce its range of machine tools for many years after.

Today, examples of the Willing Worker are relatively easy to find while not being the commonest mower in collections. The motor mower and "Ladies Mower" are much less common.