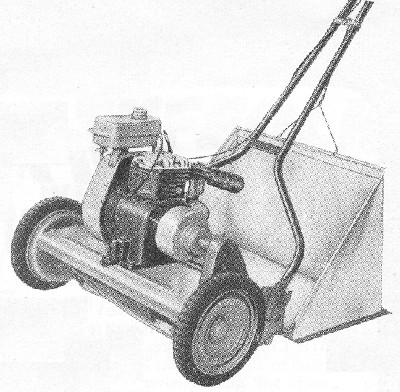 The Suffolk Squire was produced from the mid 1950s until the middle 1960s and was designed for cutting long grass. The Squire was only available in 19" cutting width. The grass was discharged to the rear into a canvas grass catcher. The price in 1957 was £26-15-00.

The Squire was one of the first small motorised sidewheel mowers produced in the UK. Manufacturers in the USA had produced similar mowers some years before and manufacturers in the UK had introduced larger machines during the 1930s, one such model being the Lloyds Pennsylvania Motor Mower

The key advantage of the motorised sidewheel was that the engine drove the cutting cylinder at a constant speed at all times. On hand machines the speed of rotation is directly related to the forward motion of the machine. Applying power directly to the cutting cylinder meant the mower could be used in confined spaces and, crucially, where effort was needed to cut the grass but forward motion was difficult or impractical. This made motorised sidewheels especially useful for cutting large areas of long grass, for example in orchards or on roadside verges.

Suffolk claimed that the Squire could cut an area of approximately 2000 square yards per hour and that fuel consumption was around one pint for one and a quarter hours of work.

The design of the Squire was similar to conventional sidewheel mowers of the period. The chassis was manufactured from cast iron with steel tie bars while the engine was mounted on a steel platform. Power was transmitted from the drive shaft to the cutting cylinder by a fully enclosed chain.

The first Squires were powered by Suffolk's popular 75G14 four stroke engine that was used on many of the company's other products, including the Colt, Pony and Punch. This engine was ideal for mowers and produced 1.1hp from its single 75cc cylinder. The engine was one of the last to be produced by any mower manufacturer in the UK as by this time most companies had switched to using units from specialist engine manufacturers such as Villiers and Briggs & Stratton.

One of the major innovations on the Squire was the use of a centrifugal clutch. This worked by engaging drive from the engine to the cutter when the engine reached a predetermined speed. This mechanism removed the need for a manual clutch and was designed to make the mower easier to use. The operator simply opened the throttle to speed the engine up and this led to the drive being engaged. When the engine was slowed the drive disengaged automatically.

Suffolk produced three variants over the course of the production run. The company also produced a heavy-duty version known that the Corporation that was designed specifically for use by local councils and authorities. This was based on the same chassis as the Squire but with a stronger cutting cylinder and slightly more powerful versions of the engines to cope with longer hours of use. 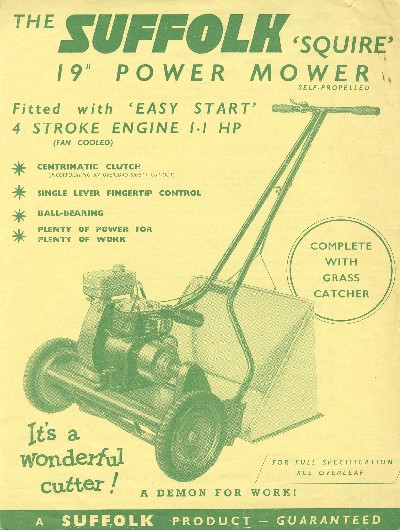