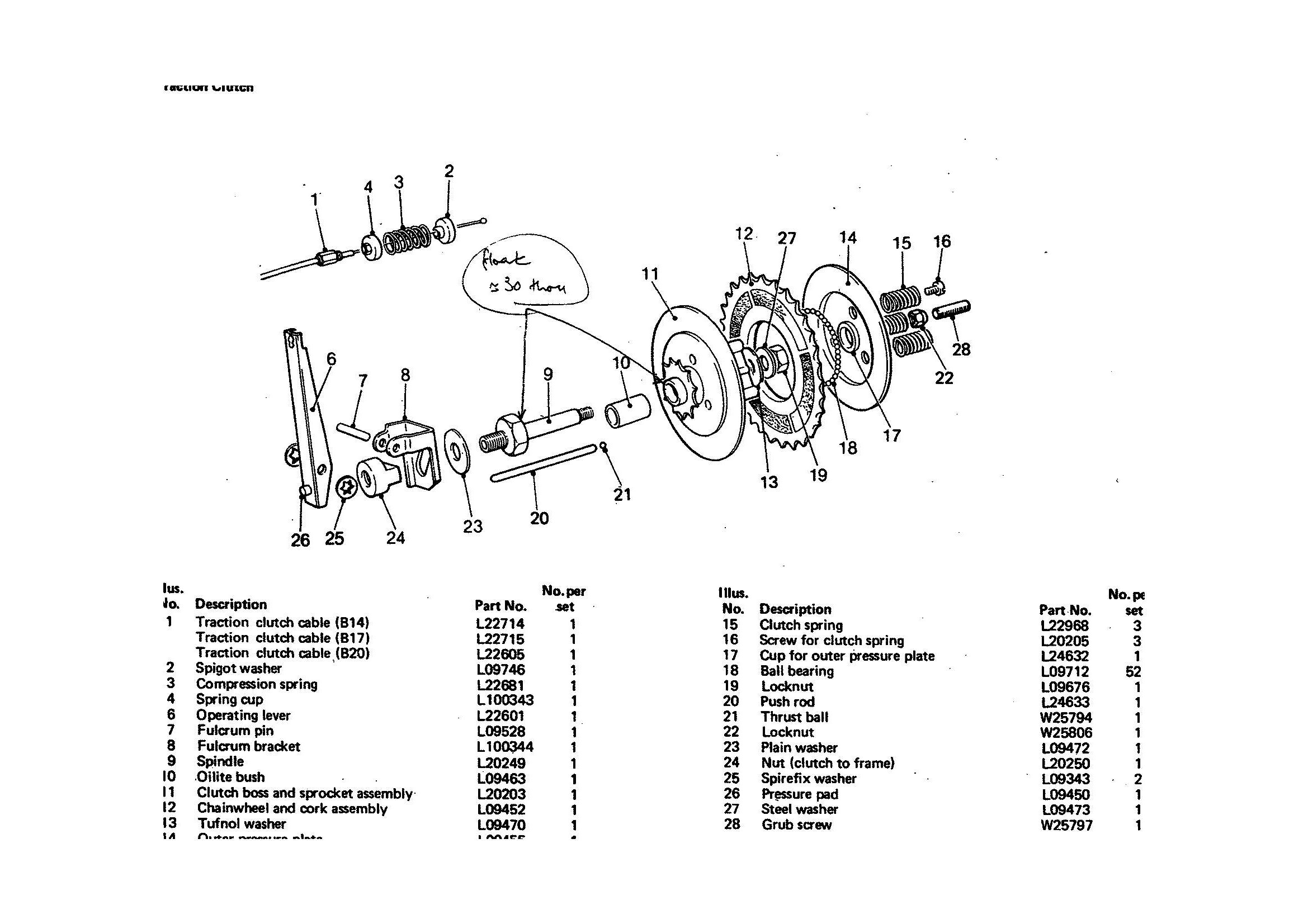 Having removed the cylinder for regrinding, I'm currently doing a partial refurbishment of the drive system on my Atco Commodore B17. I've noticed that there's quite a bit of end float on the clutch boss/sprocket when installed (item 11 on attached diagram) and have measured this at about 30 thou (imperial). The clearance looks to be determined by the tufnol washer (item 13) so there doesn't appear to be any obvious way of adjusting it.
So, my question is firstly what level of end float would be acceptable here, is 30 thou too much? Secondly, if it is too much, does anyone have any suggestions on how to reduce it?

I'm planning on replacing the chains and clutch (I have a used/good replacement) and generally cleaning/lubricating. Any other advice on work to do while I have things apart would be appreciated.

I wouldn’t worry about it, but if it bugs you a thin shim washer will sort it. Over the years that pattern of clutch was used the biggest issue was owners overtightening the chains to the detriment of channel in the friction plate and the hardening on the hub. If it’s not gone too far an extra ball or two may sort it ; remembering, pack them in tight, then remove one.

Thanks for the advice, much appreciated. I can see exactly what you mean with the spare/used parts I have acquired. These aren't in such good condition as the originals but the friction material on the latter is almost worn out. Ideally, I'd like to reline the original plate - any suggestions for how best to go about this?

I’ve never done it and I haven’t worked on a Commodore or it’s De Luxe predecessor for a long time and can’t visualise the construction of the friction material . The good news is that as that design of clutch has been around for a long time it shouldn’t be too difficult to find a better chain wheel. That said, I can’t ever remember changing one due to worn friction material; completely trashed ball track, yes, but not worn  friction material.

Thanks for the further advice Wristpin. Another question I'm afraid - are there any guidelines for setting up the throw-out on the traction clutch (set by the grub screw - part 28 in the diagram). If this is too loose then the sprocket flops around a lot, but too tight and it tends to get dragged round by the pressure plate. I'm struggling to find a sweet spot in between.

That centre screw with the locknut just compensates for wear and gives fine adjustment to the clutch push rod. With the drive engaged, ie with the pressure plate clamping the sprocket to the back plate, screw it in finger tight, back it off a turn and do up the locknut . When the drive is disengaged the sprocket should then be just unclamped and cease to drive.

Having had the cylinder & bottom blade back from regrinding, I've now been reassembling the drive system. So far, so good but, having installed & tensioned the chains driving the cylinder and the rear roller, I have a question. Both the cylinder and the rear roller turn freely but I've noticed that the tension of the chain to the rear roller varies as it goes round and there's a definite tightening on part of its travel. There's a very small amount of play between the clutch boss and the spindle (items 8, 9, 10 in the original attachment) but that doesn't seem enough to cause a problem. My suspicion is one or more tight links in the chain but, at least on an initial inspection, it seems ok. The tension on the front chain (traction clutch to cylinder) varies very slightly but not as much as the rear one.

Any suggestions/advice would be appreciated.

Easier  to diagnose hands on but take the chain off and manipulate each link to confirm or eliminate a stiff link problem before we look for something  more obscure.

I have most of a new or little used clutch assembly from an Atco of now unknown model or size, I will get some pics posted here soon, the clutch linings are circles though, not the long crescents as shown on the parts list here. I'll add some dimensions too, which might prove it to bi bigger or smaller than yours so maybe no good. We'll see... 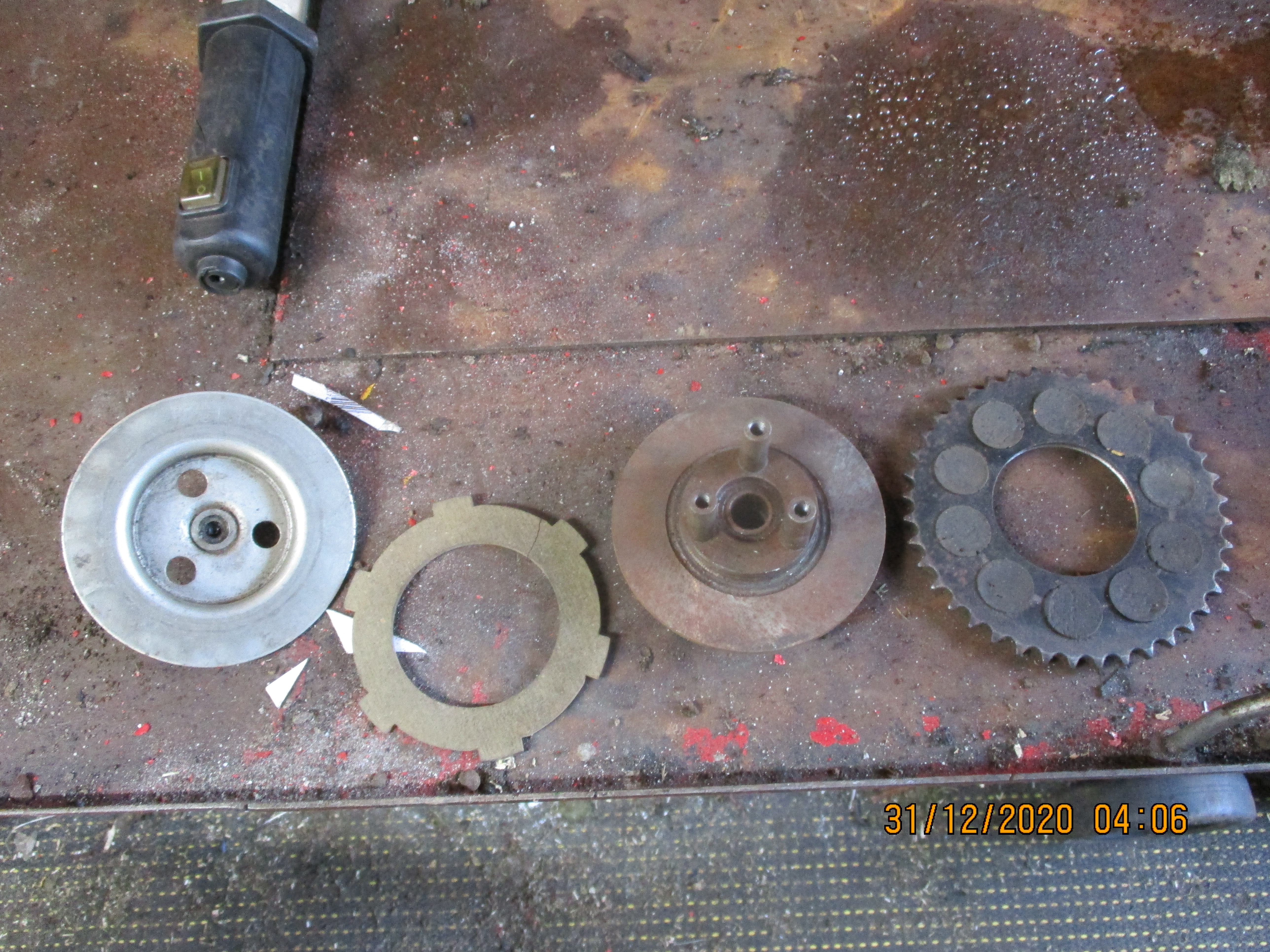 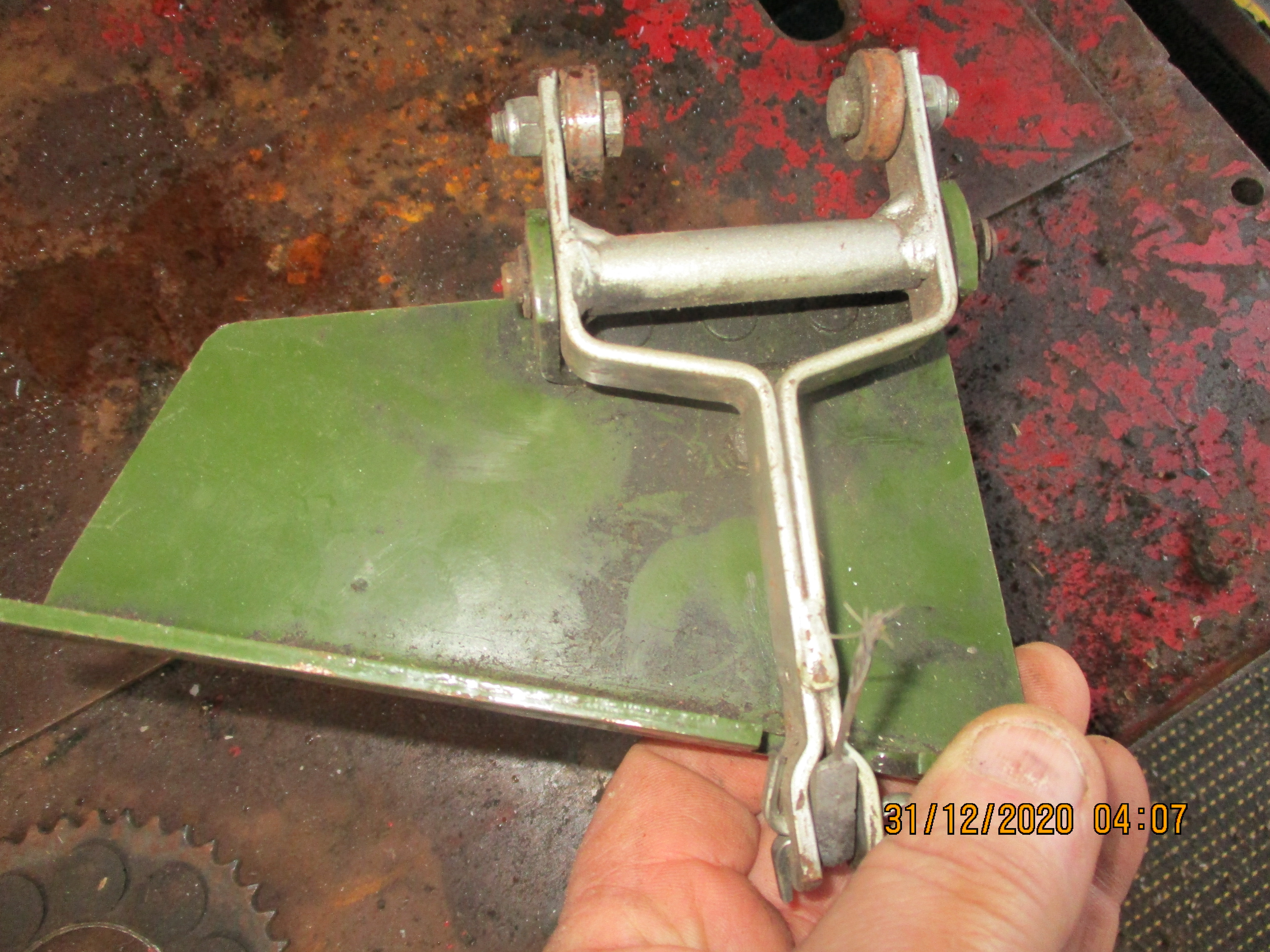 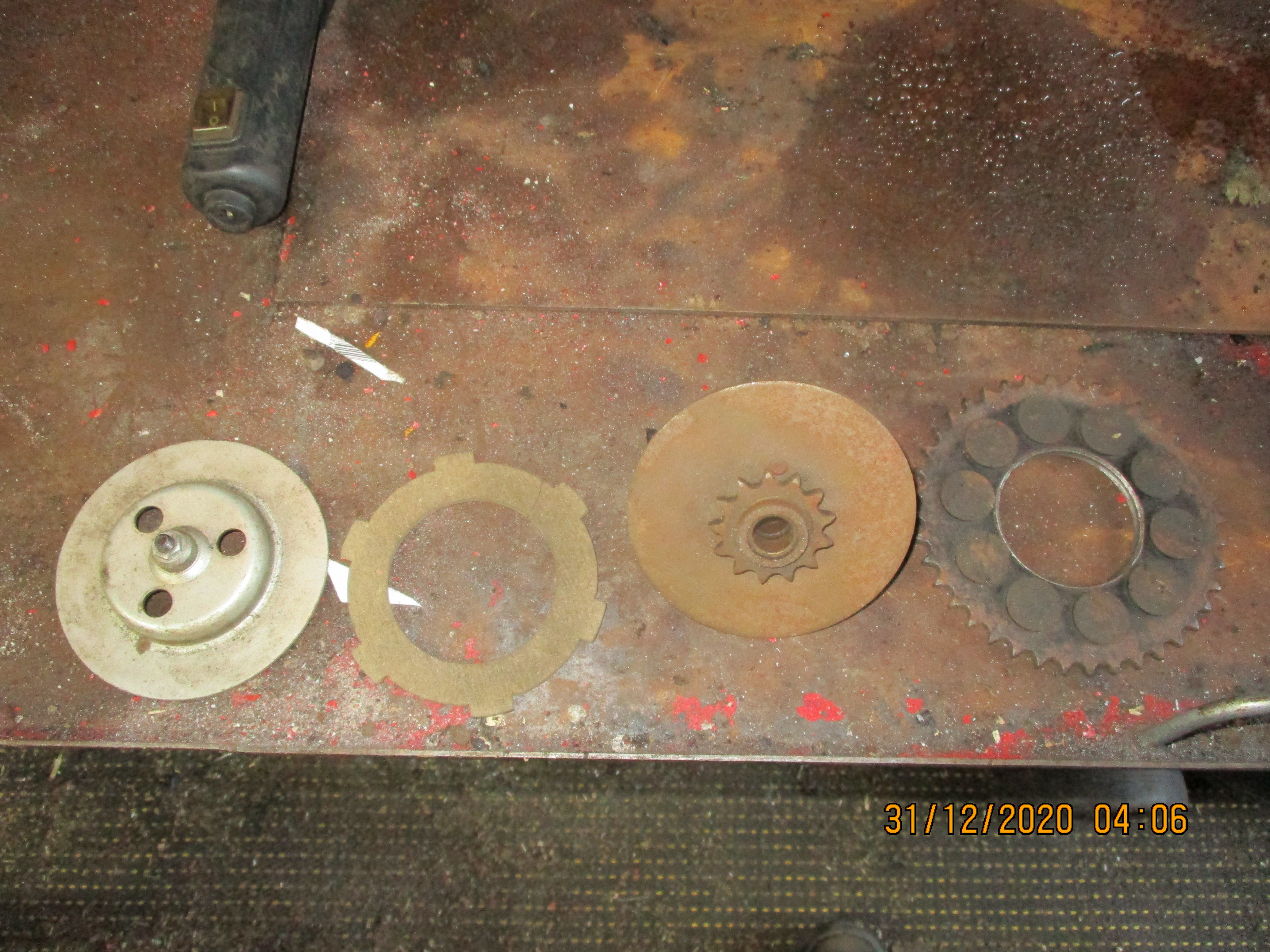 I have a feeling the clutch parts  in the photo could be from one of the last real Webb mowers.?

Thanks for the various replies. Having done some further checking, I’m now confident that the chains are fine and have no tight links, so don't believe that's the problem. When I fit the two chains individually, the tension is pretty consistent under rotation for each of them. The issue arises when they’re both fitted and the traction clutch is engaged as the tension then varies. As neither the cylinder sprocket nor the rear roller sprocket has any play, I think the problem is possibly to do with the traction clutch mechanism. There is some play between the clutch boss/sprocket (part 11) and the spindle (9), particularly apparent when the clutch is engaged, so I’ve ordered a replacement oilite bush (10) and will see whether that improves matters.

Failing that, there is definitely play between the sprocket/clutch plate (12) and the boss on which it runs (11). This means that the clutch plate (12) can be clamped off-centre to some degree when the clutch is engaged and this possibly leads to the variation in tension. I have some used spares for the clutch (parts 11, 12 & 14) so, if the oilite bush doesn’t solve the issue, the next step is probably to see whether a different combination of clutch parts gives less play.

Red DJD’s posts: the parts do look very similar, although the clutch boss/sprocket (11 in the parts diagram) is slightly different. Mine is dished towards the centre rather than flat but whether this is significant, I’m not sure. I didn't compare the number of teeth on the sprockets either.

I’ll post an update when I’ve swapped the bush but, in the meantime, any other comments or advice would be welcomed.

It could just be that your interpretation of correctly adjusted chain tension is a little too demanding for the subject matter. Try slackening them a smidgin. The problem can be that it you have a tightish chain connecting two rotating components, each with a little run out, there will come a time when the two small amounts are opposing each other.

Thank you wristpin and, yes, that's a very fair point. I'm probably looking for a greater degree of precision than the set-up is capable of delivering, especially in relation to the traction clutch. I'll fit the new oilite bush when that arrives, hopefully in the next day or two, and then see whether I can find a 'happy medium' in terms of setting the chain tensions.

Having now installed the new oilite bush, the fit of the traction clutch boss/sprocket is a lot better and the play between it and the spindle has been pretty much eliminated. However, the downside is that it hasn't made any noticeable difference to the variation in the tension of the chains as they're driven round. So, I think wristpin was correct in his comment that I'm really expecting too much precision from what is a fairly simple set-up.

I've therefore set the chains so that they're both about in spec at their tightest points. This does mean that they're a bit slack at their slackest, but I think, especially with the drive to the rear roller, that this is preferable to avoid putting too much stress on the bearing arrangement (i.e. the 52 ball bearings) for the clutch plate/sprocket.

Hopefully there won't be any issues with the rest of the reassembly! Thank you to all who've advised/commented on this thread - the guidance has been much appreciated.

The chains do run slacker than you may think, you can tell if they are too tight by placing the machine on the floor with the clutches disengaged and then trying to pull the machine backwards. If it pulls backwards easily, then the chain tension is correct, if it doesn't, then they are probably too tight.