Also spotted a couple of standards for sale in Dursley Glos, Edwin Buddings resting place, I wonder if either of them had been used to mow the cemetery? That would be a bit of provenance to add to the value.

Yes, well I would have had it

Yes, well I would have had it even if only for the box if I'd known, pity too busy to check either this site or Ebay Atcos for sale just lately!..plus have been given a warning here about buying more machines so banned myself from watching Ebay after a massive spending spree!! It's just as well that I have just moved house away from parents..

Interesting to see two of the original Atco Motor Mower models on eBay at the moment.

The Atco Motor Mower was introduced in 1921 and, as far as we know, around 900 machines were sold during that first year. All of these machines were 22" cutting width and had a Villiers 269cc two stroke engine. One of the striking features of the mower was the frame. This was constructed using cast iron components with an oval cross-section. This proved to be a little too brittle for the mowers but was probably only an interim material used before a more durable malleable cast iron frame was available sometime in 1922. It's likely that some of these "oval frame" models were made or sold in the early part of 1922 but certainly by the end of that year the new design was in production and models with additional cutting widths were also introduced. 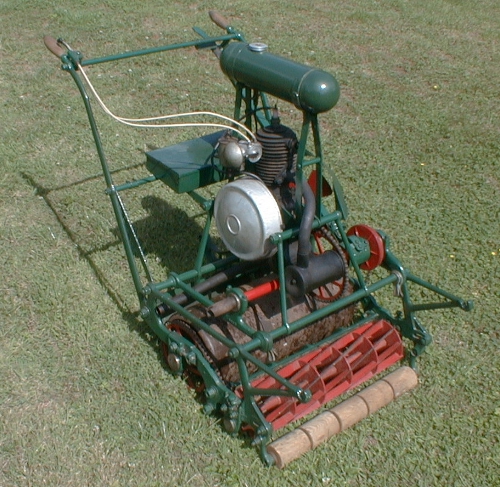 All this means that the oval frame versions are 1921 or (possibly) early 1922 while all other Atco Motor Mowers were made no earlier that 1922. Incidentally, the manufacturer Charles H Pugh used the name "The Atco Motor Mower" for all of these mowers until it introduced new designs in the early 1930s. At some point after that the name "Atco Standard" came into use to differentiate between the older and new models.

In many respects the Atco Motor Mower (more specifically the oval frame model) was the first mass produced motor mower and as such should be a desirable addition to any collection.