I have been renovating a Ransomes Marquis Mk 4a and its running well now,  but I tried to unscrew the fuel tank cap and found that the threaded attachment to the tank had become loose and turned with the cap.

I managed to secure the threaded body with a cable tie to remove the cap but has anyone had this before  and how to repair the tank?

The threaded boss is soldered into the top of the tank**. I believe that this is done before the upper and lower parts of the tank are fixed together and that the lower edge of boss is slightly splayed so that it is difficult or impossible to remove it, but it can, and will drop down inside the assembled tank.  Faced with the problem in the past I’ve made a set of “goal posts” that stand on the flange around the upper and lower sections of the tank, bridging the boss and with a spring loaded grapple holding it in position while I remade the soldered joint.

They say that a picture is worth a thousand words and I think that I may still have the apparatus and I will have a look tomorrow and post a pic if I find it, but if it all sounds like too much of a faff, try Araldite or another similar two part epoxy, but don’t push down on the boss or a fishing expedition will be required.

** Thinking about it, it may be a crimped joint but either way they do occasionally come adrift.

Edit, I’ve assumed that your Mk4a has a Villiers F12 engine.

This is the holding gizmo.Not quite as I remembered in that it stands on the top of the tank, not the flange of the two sections. It exerts enough pull to hold the boss in place while running a seam of solder around the joint with the top section of the tank. 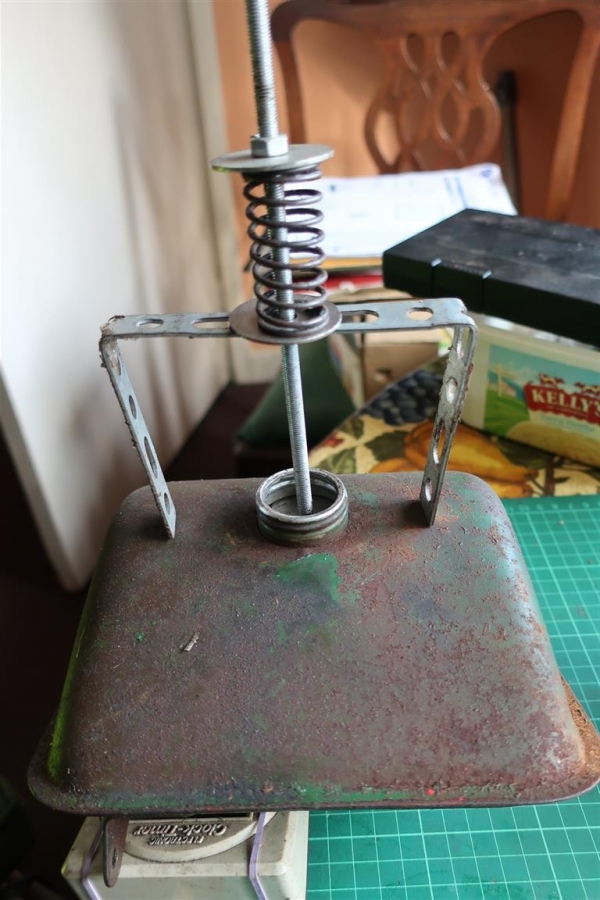 Many thanks Wristpin, yes the same tank and that is an ingenious device! I will try and create something similar in the shed. What do you recommend as the best solder and flux for this repair?