Hi I hope that somebody can help. I had a mower 30s given to me in good faith had been serviced and blade sharpened a nice clean mower. Unfortunately it was going well for about 30 mins then it stopped half way across the lawn. Now I do not have a spark I am at a loss at what to do.  Somebody said its the coil and somebody said its the points,does it have points?  I cant take it back to where it was serviced as its too far away. can anyone help!!

I'm thinking of making a few

I'm thinking of making a few videos on how to repair these on Youtube, since there doesn't appear to be any on there.

The way to tell if your mower has points is to check the material the engine is made from, if it's cast iron, then it has points, then if it's aluminum, it has an electronic ignition module.

It's most likely to be aluminum block engine, first check the spark plug, HT lead and all connections to make sure nothing is broke first. If nothings wrong it probably means the ignition module needs replacing, which unfortunatley costs about £30. The part can be accessed by removing the flywheel, which is a similar procedure to the one I have shown in the paragraphs below, the module which would then need replacing, with http://www.jungle-busters.co.uk/epages/es122164.sf/?Locale=en_GB&ObjectPath=/Shops/es122164/Products/F016L34244&ViewAction=ViewProductViaPortal this part.

Next, take a hammer and strike the end of the crankshaft thread where the nut is (the nut should protect the thread from being deformed), you may need to do this several times, use a metal hammer, not a rubber/wooden mallet or anything like that. Once the flywheel loosens off, take it off, you will then have access to the ignition system.

If it uses points, then the points will probably be on the bottom left of the ignition system, they are two plates which move together and apart when the engine turns over. Use some fine emery paper to clean the two contact plates, and make sure the gap between the points is about 0.020" when the points are at their furthest distance from each other. Reassemble the engine and try and run it, that might've solved the problem.

Other problems with the ignition system may include faulty wiring, the condensor or the coil, but the points are the most common problem with these engines.

Also take great care removing the flywheel by the method described. It is much safer to use a proper "knock off tool" or to make yourself a simple puller to bolt into the two threaded holes that held the recoil starter cup on. If you are going to hit the nut  use a heavy copper hammer and hit it absolutely square on while applying gentle outward leverage on the flywheel.

Here's a bit more info that may be useful  - it is from a wall poster sized sheet that Suffolk issued in about 1985 so I had to fold it to get it under the scanner. When next near someone with a big copier I will get it reduced for easier transmission! Hopefully , if you click on this link you should see it!https://www.dropbox.com/s/vpfuj6laouf1dkn/Suffolk%20A980001.pdf

While it is always preferable to remove flywheels with the appropriate puller the next best thing is a purpose made Knock Off Tool. Remove the flywheel retaining nut, screw on the tool/crank protector, bask it off half a turn and then give it a smart smack with a heavy hammer while levering gently out ward  on the flywheel.

Here is the collection that I have built up over the years, Suffolk, Kohler, Tecumseh and Briggs etc. 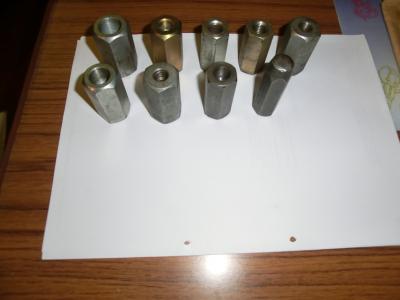