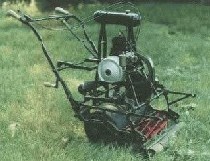 The Atco Standard was the first successful mass produced motor mower. It remains a design classic.

The machine was introduced in 1921, the first mower made by Charles H Pugh Ltd. This company had been in existence for many years, and was best known as a successful manufacturer of small 'repetition' components. These had been used extensively during the First World War on many items, including armaments. Demand for these products inevitably dropped following the Armistice in 1918, and the company looked for new products and markets. One of the first products was a carburettor known as the Senspray which was sold to engine manufacturers such as Villiers for use in motorcycles. Another product was Alfred Appleby Cycle Chain, "The Best Cycle Chain In The World".

Legend has it that the first Atco motor mower was produced when the pony which pulled the mower owned by of one of the company directors died. Rather than buy a new pony, the director suggested a motorised alternative.

The name "Atco" was derived from the Atlas Chain Company, another name owned by Charles H Pugh Ltd. The resulting mower utilised a number of components already manufactured by the company, including Senspray carburettor and chain drive.

The first 1921 design was a 22 inch (22") machine with an oval section cast iron frame and a 269cc Villiers MkIV two stroke engine with brass flywheel magneto. Cast iron was used because the preferred supplier was unable to deliver the right components due to an industrial dispute in the foundry. The cast frames were very fragile and apparently many of these early machines broke during assembly, particularly when the frames were tightened. Atco's own figures show that 921 mowers were sold in the first year of production. 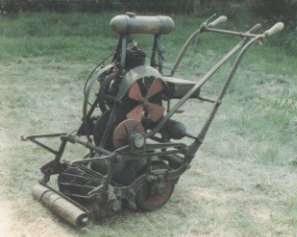 The "oval frame" casting was replaced in 1922 with a more resilient "H" section malleable iron frame. This form of iron is more durable than cast and the revised mowers were much better at withstanding the knocks and bumps which inevitably occurred during use. Interestingly, Atco avoided flat side plates (as used by most of their rivals by this time) because they were, according to the company, more difficult to adjust, noisier and more prone to rust. 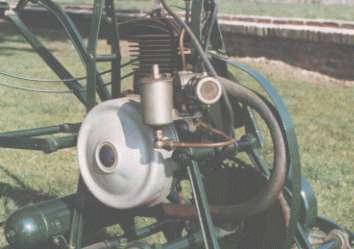 By this time, over 14,000 Atco Standards had been sold and the price of the 22" model had fallen from 75 Guineas in 1921 to 54 Guineas, a significant price drop, and due primarily to Atco's efficient production.

The Standard is a very simple design, although it looks quite complicated. Open iron sideframes are joined together by cross struts made from tubular iron with long bolts running through them. The various components, such as drive shaft, clutch, engine, cutting cylinder and roller are all supported by the frame and are all very easy to remove, and this made the machines economical and simple to service, giving the company a huge advantage over its competitors. The design also allowed machines of various cut widths to be made from a relatively few components. The frame was virtually the same for each width of cut produced, with only the cross struts, rollers, cutting cylinder, bottom blade and reduction drive shaft required to vary in length. This enabled the company to produce a wide range of models using mass production techniques and sell them at a very low price. 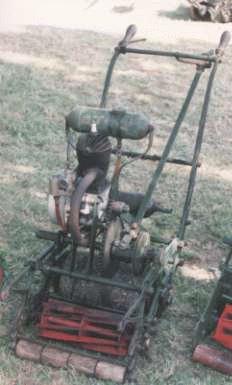 In 1928/29 Atco introduced a 12" mower which looked very much like the Standards, except that it had the fuel tank mounted across the engine, rather than 'in line". This became known as the "HY" model, possibly due to the combination of the "H" section frame and "Y" shape created by the petrol tank mountings.

Production of the Standards continued until the early 1930s, when the model was replaced by a new Atco range. Strictly speaking the name Atco Standard was only introduced at this time to differentiate the earlier machines from the new models.

The Atco Standard remained in widespread use for many years and the company was still able to service its early machines as late as the 1950s and 60s. Many Standards remain in circulation and, while their value is not high, they are very popular with collectors, partly because of their unusual design and possibly because they are the oldest readily available motor mowers.