The Silens Messor lawn mower was introduced in 1859 by Thomas Green and Sons of Leeds & London. It was to become one of the most successful lawn mower designs ever and remained in production until the beginning of the Second World war, eighty years after its introduction. By this time, more than a million had been sold in cutting sizes from 6 to 48 inches.

Before the Silens Messor, most mowers were based on the Budding's patented design of 1830. These early mowers utilised large gear wheels to transmit power from the rear roller to the cutting cylinder or reel. Greens had introduced a gear driven mower of their own design in the 1850s but this appears not to have sold well. 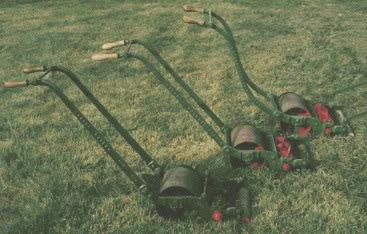 But the Silens Messor was an immediate success. The use of a block chain to transmit power from the rear roller to the cutting cylinder was a revolutionary innovation which provided greater reliability and quieter operation than gear driven machines. The combination of sprocket and open chain (see top) was less prone to damage from small stones or garden debris than the meshed gears of other designs and they were le ss noisy. This was important because mowers were used on ornamental lawns at the houses of the wealthy, who did not want to be disturbed.

Greens had obviously recognised the advantages of this when naming their new machine because Silens Messor means 'silent operation' in Latin.

Despite the advantages of the chain and sprocket design, the Silens Messor was also available as a gear driven model for many years, although very few examples of these machines have survived. Interestingly, Green's other successful mower of the 19th century, the Multum in Parvo, was also available in gear and chain drive versions, but the majority of surviving machines are gear driven!

One of the other innovations of the Silens Messor was the use of a reversible cutting cylinder or reel. Because there was a chain sprocket on each end, the cylinder to be detached from the frame and replaced the opposite way round. This meant that the sharp face on both edges of the blade could be used before the cylinder had to be reground. It also allowed a process known as 'back lapping' where the cylinder could be resharpened in position on the machine, reducing the need for costly maintenance.

Over the years, the Silens Messor was produced in a wide range of cutting widths. The smallest models in the range were six inches wide and often used to cut the grass on narrow paths and between obstructions such as gravestones in cemeteries. 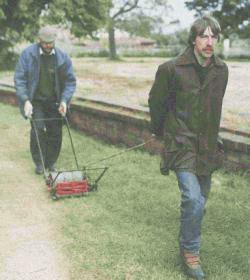 Machines with 6, 8 and 10 inch cutting widths were designed to be used by a single person, but models over this size were too large and heavy to be used alone. Instead, the 12, 14 and 16 inch models were equipped with a bracket attached to the front rollers which allowed a second person to assist the operator by pulling the mower by means of a draw rope (see right). Larger machines, up to the widest cut of 48 inches, were designed to be pulled by a pony or horse, with the operator controlling the mower and animal.

Inevitably, the mower was modified over the years. Early Silens Messors have curved or elongated 'S' shaped handles and a simple scraper plate on the rear roller. In about 1895, the handles were straightened and a more ornate scraper introduced which doubled up as a name plate. In the early part of the 20th century, the design was modified again to incorporate dual bolts to attach the handles to the main chassis and enable better adjustment of the operating height. Examples of the three main designs are shown in the photograph above.

For many years, the handles had the serial number of the mower cast into them (and for a few years a specific date was engraved onto the handles of some machines ). However, no contemporary company records exist to enable the matching of serial numbers to the year of production. This means that the minor differences in the mower design are now the only ways of identifying the approximate age of these very old mowers.

As with many mowers from the 19th and early 20th centuries, the Silens Messor was available with a number of options. A grass collecting box could be supplied at extra cost, and a complete range of spare parts including a special adjusting spanner was available direct from the manufacturer. Greens even produced small mower carriages which made it easier to transport the Silens Messor across a lawn or yard when the mower was not in use.

Towards the end of the production Greens introduced models known and the SM Deluxe and the SM Junior, although the original Silens Messor also seems to have been available during this period. The Silens Messor was still being advertised in Greens catalogues in 1939, although it would appear that very few mowers were being sold at this time.

Today the Silens Messor is a popular mower with collectors because of its ornate and compact design. Although examples of the 10 and 12 inch models are readily available, examples in larger or smaller cuttings widths are less common. Early examples with t he 'S' shaped handles and models with gear drives instead of chain are also rarer.