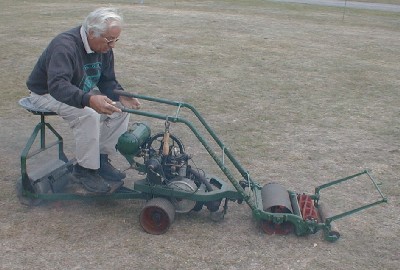 The Rendle Motor Mower and Roller Attachment was designed to convert a hand mower into a motor mower. It could also be used to push garden rollers.

The idea of the mower conversion or pusher unit was conceived in the early 1920s. At the time motor mowers were a relatively new idea and much more expensive than a hand mower of the same cutting width. The new lightweight petrol engines, typified by the Villiers two stroke, that had been developed in the years leading up to and during the First World War to power motor cycles were now becoming available to manufacturers of other machinery including lawn mowers.

A number of manufacturers used the new two stroke engines to power lawn mowers. Early examples can be seen on machines such as the original Atco Motor Mower and the Shanks Jehu. These machines initially sold for prices in excess of £75. Many people already had perfectly good hand lawn mowers and did not want to spend such high amounts on replacing them.

Social changes meant that fewer people were being employed to work on gardens and estates. This forced people who wanted their lawn mowed to look for labour saving alternatives to existing machinery such as the push-and-pull mowers that were commonplace in medium sized gardens. These mowers, which were generally between 12" and 18" cutting widths needed two people to operate them.

One solution was to attach a motorised unit to an existing hand mower to convert it into a motor mower. The unit in effect pushed the mower along, hence the name of mower pusher. The Rendle and its main rival, the MP Mower Pusher, were introduced in the early 1920s. Both were powered by the same 2½hp Villiers Mark V 269cc two stroke engines. These were powerful enough for a wide range of applications and in addition to mowers they can be found in motor cycles, small vehicles and other machinery from the period. 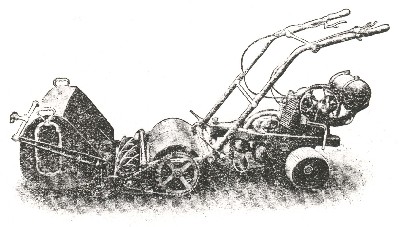 The Rendle was manufactured by W Edgecumbe Rendle & Company of London and in 1924 was priced at £39-0-0. It was advertised as being suitable for use with hand mowers of 16" to 27" cutting widths. It is likely that the lower limit was set by the width of the Rendle unit as there was little point in using a pusher on a narrower mower as it would then overhang the edge of the lawn. The upper limit is perhaps an indication of the pusher's inability to work with larger, and therefore heavier, machines.

Although the Rendle was designed primarily as a mower pusher unit it could also be attached to a garden roller. The fittings for this cost an extra £2-5-0 in 1924.

Unlike the MP, which incorporated a seat in its design, the Rendle was meant to be operated from the walking position. Despite its weight of 189lb, approximately 86kg, the unit was powerful enough to tow a trailer seat as well as pushing its mower and this may well have been a popular configuration.

Mower pushers only enjoyed brief popularity. One possible explanation is that the price of motor mowers fell dramatically by the mid 1920s to such an extent that some models were priced at little more than the cost of a conversion unit. People probably chose to buy a proper motor mower instead. Relatively few examples have survived and Rendles are much scarcer than MPs.