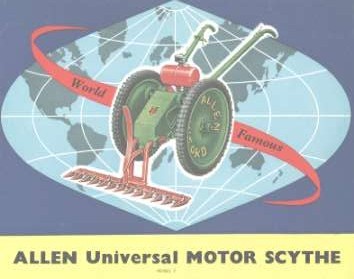 "Wherever A Man Can Walk, An Allen Can Cut"

The Allen Scythe is one of those odd machines that does not easily fit into a specific category. Although designed for cutting grass, the Allen Scythe was not a lawn mower in the strictest sense because its main use was to cut rough and long grass on verges and in fields, orchards and rough ground. Nonetheless, it does hold a special place in the history of the mower and many enthusiasts have an example in their collection.

The most obvious difference between an Allen Scythe and a conventional mower is the way it cuts the grass. A large toothed cutting blade is slid rapidly back and forth against a similarly shaped fixed knife bed to give a scissor like action. This back and forth cutting action leads to the generic name of 'reciprocating knife' mowers. 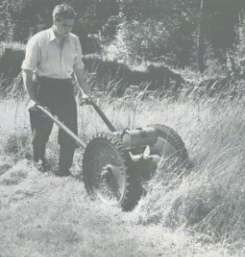 The concept will be most familiar as the method employed in hay mowers, corn reapers and combined harvesters.

Although a number of mowers have used this technique over the years, the best known example was the Allen Scythe manufactured by John Allen & Sons of Oxford, England. More than 250,000 examples were manufactured between 1935 and 1973.

The Allen Scythe was best known as a grass cutter. But in the 1950s it was sold not only as a tool for cutting grass but also as a central power unit that could be used with a range of attachments for a variety of other tasks around the garden, smallholding or farm.

At one time an amazing 27 different implements and 13 optional extras were available for use with the Allen Scythe. Implements included a sawbench, horticultural plough, generator, hay sweep, rotary broom, carrier, centrifugal pump, sheep shears, gang mower and a compressor. 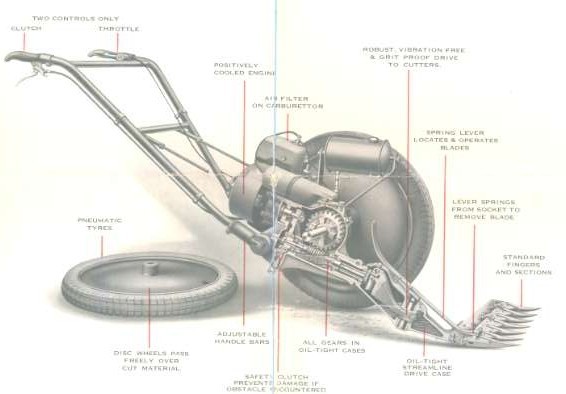 The design of the basic Allen Scythe was very simple. A solid cast iron chassis enclosed the gear box and drive mechanism and acted as a mounting point for the simple two stroke petrol engine. Two large diameter wheels (rubber tyred or solid iron) were turned by a combination of ratchets in the hubs, a worm drive and a pair of reduction gears. The cutter bar is driven from the worm drive shaft through an enclosed crank to an oscillating spring steel arm.

Allen Scythes are notoriously clumsy and cumbersome to drive. Basically, the engine runs and the clutch is engaged by releasing a lever on the handle. The mower shoots forward, often faster than expected.

Mk1 Allen Scythes appeared in 1935 and had a three-piece fuel tank (facing forward), brass handle grips and a 147cc Villiers two-stroke engine. Mk2 machines also had three-piece tanks but later versions had a one-piece tank. Handles were also brass but were later covered in black celluloid. Controls on both the Mk1 and Mk2 were cable operated. The crank cases were aluminium and brass, depending on the year of manufacture.

The model F was introduced in 1957 and continued in production until 1973. This model differed from earlier versions by the inclusion of a 2500rpm power-take-off unit that enabled the use of the attachments mentioned above.

Allen Scythes are popular with collectors of lawn mowers, horticultural equipment and agricultural machinery because of their diversity of uses. They are also still widely used by professional gardeners and private individuals who value the ability to cut long and rough grass easily.