So moving on from the problem now solved where the engine would not pick up revs from idle, I seem to have uncovered the next problem.

The blades turn "fairly" easily (although I had a devil of a job getting grease into the nipples, I was told to inject it until it weeps out of the joint, but I just can't make that happen - but I do have the world's most temperamental grease gun and it could be that refusing to play nicely) but the clutch does not seem to engage cleanly - the revs pick up and there is a "ringing" sound like a bell which I guess is the clutch shoes rattling on the inside of the chamber, and only really at maximum revs does the clutch engage , and then only weakly so it jams at any slight provocation.

What is the easiest way to get inside the clutch, and would I expect to find any adjustment? There is a square headed bolt on the drive shaft before the clutch, but I am guessing that this doesn't help me take it apart.

There is a manual clutch on the far side of the centrifugal clutch that looks like it is missing one of it's 2 stoppers. The only other things I can see are to remove the engine or to take it apart from the end that had the drive chains.

Any pointers would be appreciated. Thanks 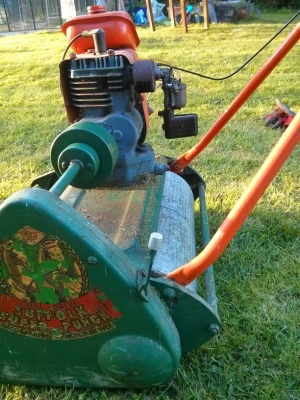 The best way to access the clutch is to unbolt the the engine and move it away from tbe Clutch drum, take care to capture any shims that may or may not be fitted under the engine.

The clutch should come away still attached to the crankshaft, you should now be able to see the condition of the centrifugal clutch shoes. You need to check that the friction linings are still in place and that their rivets are tight, also check that the shoes are free to move about their pivots as they do sometimes seize preventing the shoes from gripping the drum correctly when accelerating. If you have cause to remove the shoes do be careful to refit them correctly or you will have problems with the clutch grabbing.

To my knowledge there are no adjustments for this clutch.

I go with everything that

I go with everything that Hillsider has said with the addition that if your machine has its original period clutch shoes they each have a little adjustable grub screw that alters the resistance to being expanded by centrifugal force. I'll have a look in the " bits box" in the morning and see if there is one to illustrate the  point.

However before you blame the clutch check that the cutting cylinder bearings are free to turn and that the blades are sharp and in set with the bottom blade to give a good shearing action without absorbing an undue amount of power.

I have already slacked off the cylinder so that it doesn't rub on the bottom plate at all to try and rule out friction - the clutch outer case and hence the blades turn easily if I spin it by hand - although not a smoothly as my other mower, I can spin them round with a flick of the wrist so unless the adjustment is so precise that it needs to be as easy as a baby's spinning toy then that isn't the problem.

Sounds as though the shoes

Sounds as though the shoes may well be stuck on their pivot pins. Pull them off, clean up the pins, put a drop of oil on them and without the springs in place replace the shoes one at a time and work them back and forth to clean any corrosion from their bores. Wipe off any excess oil and reassemble.

Do not be tempted to run the engine without the shoes being enclosed in the Drum!

Had a scrabble round in the

Had a scrabble round in the box of bits and here are three generations of Suffolk / Qualcast centrifugal clutch.

From left to right.

Heavy duty original steel clutch assembly with compression springs and screw adjuster. Used in the heavier Punches and some of the side wheel rough cutters such as the Corporation and Squire.

Centre. The scaled down iron version used in the Colt and other lighter models. Still with compression springs and adjuster screws.

Both of the above ran within machined steel drums. It can be seen that the Colt assembly still has the original pattern top hat spigot bearing while the other two have plain bearings. The flanges of the top hat bearings had a habit of breaking off and later orders for that part were fulfilled with a plain bush and steel thrust washer.

The right hand assembly is the later alloy type  with torsion springs that ran in a pressed steel drum.  Several issues with those; the back plate / shoe assembly used to work loose on the crank and flop about and the pressed steel drums were often out of true both due to ovality and out of alignment with their output shafts. It was not unusual to see burn marks in the paint on the drums  where they had dragged on the shoes. 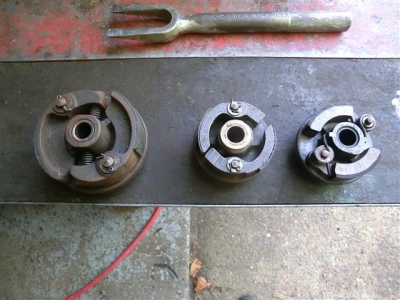 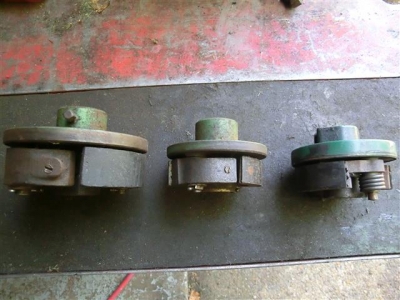 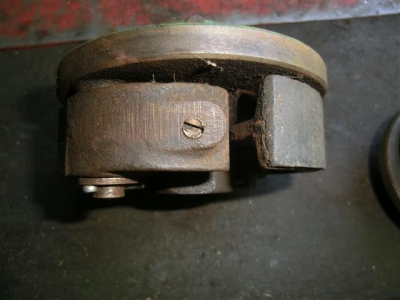 Excellent, thank you. Presumably that square headed bolt goes into a keyway of some sort on the drive shaft so I should leave well alone as long as I don't need to remove the unit from the engine - and if the plates need adjusting then unscrewing the adjustment screw moves the shoes out so should engage at lower RPM - although from the earlier problem you describe I would wonder if one of the shoes is not pivoting at all so I am running on one shoe (which might explain the bell ringing / tinkling sound as it picks up revs, dragging one shoe around the drum).

That is an ominous looking tool in the top picture - hopefully I don't need one to do the job!

I'll take some pics as I do it and report back

The square headed screw just clamps to the crank on the opposite side to the key. I think that the tinkling that you describe is possibly the sliding pin clutch on the outside of the main drum that allows you to totally disengage the drive from the centrifugal bit while making adjustments to the carb etc. It is held in engagement / disengagement by a spring loaded ball bearing catch embedded in the drive shaft and can rattle a bit. Not unknown for one of the pins to become detached . It's clearly visible in the image that you posted and just pulls away from the main drum to disengage - unless there are several coats of paint preventing it from moving!!

ok, thanks. Yes the hand

ok, thanks. Yes the hand clutch does still work and has exactly half the number of spring loaded bearings that it probably had when it originally left the factory. My other mower has no bearings and someone has rammed a split pin through holes to keep the hand clutch jammed in place. I hadn't considered that as the source of the tinkling but it does have a bit of play in it, and it is shaped a bit like a bell. And I described the problem as "tinkling like a bell" so maybe you are onto something :)

Quite often used to see them

Quite often used to see them with a Jubilee hose clip around the shaft to keep them engaged!

OK, I think this counts as

OK, I think this counts as progress. Removed the engine, it seemed to be shimmed with a mixture of dried grass and oil so nothing to worry about there - and it has the bigger version of your pictured clutch, the only difference being that the shoes are held on with a circlip rather than a split pin.

One shoe moved fairly freely, the other needed much more force to displace so I guess that is the problem. I unscrewed the adjusting screw to the max and it moved a bit easier, so next task was to remove the shoe and try and clean and lubricate the pivot peg. This is where I bottled it - the circlip comes off and I can move the shoe on the peg, but it looked like it would have bent or broken the springs as they were still in place and were being forced through an angle that I didn't like the look of.

Have I missed a trick here - do I remove the springs first (and if so, how) or is it a game of brute force - or some other trick that I have missed?

Good that you have found a

Good that you have found a sticky shoe it does not take much friction in those pivots to make a difference.

You could claim that the grass etc packed under the engine was an early form of insulation to soften the engine noise but I don't think anyone would believe you!

Re the springs you were almost there - slacken off the tension on the springs (already done I think) then ease the shoes off sideways, the springs should flex enough to follow the shoe until it clears the back plate. If you are concerned about losing the springs if they should attempt flight then tether them with a piece of stout string or wire.

Years since I've done one but

Years since I've done one but can't remember it being a problem. However, perhaps a thin bladed screw driver could be used to lift the " anchored" end of the spring to aid it to move out with the shoe ?

Thanks. This is where I got

Thanks. This is where I got to - you can see the problem spring on the right , the adjustment is now out as far as it will go 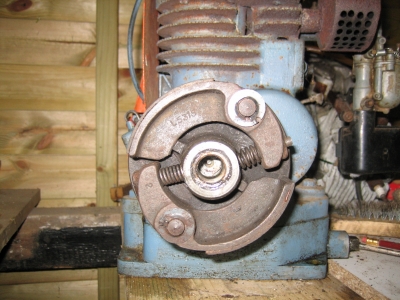 I already put the engine back on but it's poor weather so it will be a week now before I can test it, but I'll see if the adjustment made any difference to the clutch. If not I'll pop it back off and take the shoes off and let you know either way

Had a play with mine this

Had a play with mine this afternoon . No tool needed, with the adjusting screw backed right off the shoes can be drawn off the pins bringing the springs with them .

so - update. After taking the

so - update. After taking the clutch adjustment to the max, the clutch engagement is much improved - not as good as the other mower, but good enough to use. I will see if prolonged use frees it up, otherwise I will take it apart and clean up the pins in winter.

Thanks for your help Wrispin and Hillsider, much appreciated. Back to mowing