I have recently acquired a 1962 ATCO lawnmower serial 6216. It was left in a shed (thankfully with a roof on) for about 15 years and apparently was not running when it was put away so I thought for a first project this would be great. I have checked the engine over and it seems to have decent compression and when I checked the carb, it too seemed fine. I put some petrol into the tank and turned on the fuel tap to let it flow through to the carb but when I began to pull the engine, petrol started to flow out of the back of the air filter on the carb. I took the filter off and found that there was petrol leaking out of the hole ( I tried to attach a photo but I cant ) just below the air intake. At first I thought it was a blockage but after I removed the domed nut, I found that the fuel jet inside was completely clear. It had been messed with though because the slot for the screwdriver was damaged like someone had tried to force it in or something. I cannot find out if the previous owner did anything because they passed away a few years ago. From my limited experience of fixing newer lawn mowers, I found that carburetors shoot petrol through into the engine but this one seems different. There is a tiny hole in the carb but it does not screw up to the level of the intake, I cannot see what is stopping it but I do not want to push it.

If anyone could tell me what could be wrong with the carb it would be greatly appreciated. If anyone knows how these Villiers s10/2 carbs work would also be handy. There is an exploded diagram on the internet but I do not want to post the link in case it is private etc.

Most carbs acquire some "distress" over the years so the damage to the jet is probably "normal". I should think that your best bet is to start with a complete carb strip and clean using good fitting spanners and screwdrivers so as not to add to the distress!

I may be wrong but I work on the assumption that unless anything published on line says that it is copyrighted there is no harm in reproducing it for non commercial purposes and certainly no issue with posting a link to it.

I will see what I have relating to the S10 and post it later.

Thanks for replying so quickly, here is the link for the exploded view:

The fuel jet (part 24) is at fault I think. I am not sure but it would seem that the small hole near the top of the jet should point into the engine and shoot petrol into it but it does not screw in far enough to push out out of the top of the barrel. (If any of that made sense)

If anyone could vaugly explain the workings of this carb it would be greatly appreciated,

OK, vague explanation of how

OK, vague explanation of how a carb works, if you look into the carb through where it mounts to the engine, you should be able to see that it narrows in the middle, this is know as the Venturi. What happens is, when the engine pulls air in through the carb, the air has to speedup to go through the narrow part, when it does this, it forms a local vacuum and this sucks fuel up through the fuel tube and this mixes with the air and is sprayed into the engine, the engine comes up to TDC, there is a big bang and this forces the piston down and around we go again. right is that vague enough ?

If fuel is coming out of the back of the carb, or any where else for that matter, it has a technical term, it is called 'flooding' , check items 34 & 29 for grooving, dirt or bending.

Clean and check everything, does the float actually float ?

Until you can get fuel to go into the carb and stay there without leaking, you are not going to get the engine to run with any success.

The jet or emulsion tube

The jet or emulsion tube screws in until it seats in its housing . As long as it's properly seated it is in far enough and does not necessarily have to stick up into the venturi  ( the horizontal passage through the carburettor). Briefly and simply the downward movement of the piston on the induction stroke creates a low pressure area in the venturi and atmospheric pressure entering the float chamber via the bowl vent pushes fuel up through the jet where it is vapourised  when it enters the venturi and the vapourised fuel air mixture is drawn into the cylinder.

So make sure that the interior of the carb and all the jets are clean, the fuel is at the correct level in the float bowl ans that all joints and flanges are true and air tight.

You  haven't mentioned the ignition  - does the engine have a reasonably strong spark?

Thanks for the explanations, I have stripped the carb and it seems to have improved a bit but there is still petrol leaking out of the air filter. Not as much though... I tried again to start it but no luck the reason now being that there is no spark. The spark plug is in great condition. I have tried to remove the protective cover that covers the flywheel to get to the magneto but there is a flat head screw stuck solid. I'm not sure how I will get the screw out, I've tried WD40 and tapping it with a rubber hammer but neither have worked and I'm worried brute force with the screwdriver will strip the head. What could be wrong with the magneto or is it even the magneto? I guessed that there would be issues since I was told recently it did not work when it was put away in the shed...

Thanks for your replies,

Guess that the screw is

Guess that the screw is securing the " window" that gives access to the contact breaker points which are possibly in need of cleaning and adjusting. You may be able to free it by placing a flat ended punch or even a bolt square on to the head of the screw and giving it a sharp tap with a hammer ( metal not rubber!)

the fuel leaking is possible due to a leaking float needle valve. May be the needle is worn or contaminated  or even the float itself is leaking..

Thanks for your help Wristpin

Thanks for your help Wristpin, I managed to get the bolt undone and cleaned the points, they were touching which explains the lack of spark. I set them at 0.015" and when I turned the flywheel, I got a spark! Once re-assembled, I checked all of the seals and pipes and they were fine. When I pulled it, I was definitely not expecting it to start first pull! There was no petrol leaking out of the carb either which was great. What oil would you recommend? I was going to put some Castrol semi synthetic in it but I can get some more tomorrow when I get petrol. Now all that's left is to re-spray it. I found some Ford pine green spray in a shop just down the road from me so I'm using that. It is a pretty much perfect match to Atco green. Does anyone know where I can get the transfers of the Atco logo? Sorry this post is late, I haven't had internet for a few weeks...

Many thanks again, Chris

Here are some photos, the

Here are some photos, the pull starter is the original but I have restored it. It is sprayed and I have fitted a new pull cord in it after the old one was so stiff it would not pull:

I will upload another photo when it is sprayed

Oil. You haven't told us what

Oil. You haven't told us what model Villiers but I'm guessing that it may be one of the iron block MK 7/10 or 12 or possibly one of the later alloy blocked Lightweight series. The recommended oil in those days was probably Castrol XL or its equivalent from another manufacturer. This was a straight SAE30 oil. It wasn't until some time later that mowers used multigrades let alone semi synthetics, so subject to knowing exactly what the engine is I would just use SAE30  - often labeled Lawnmower Oil!

Decals / transfers. Some are shown and available from this OLC website but if you can't find what you need there are a couple of commercial producers. One that comes to mind is Machinery Decals.

Hi Chris. I saw this thread

Hi Chris. I saw this thread when I searched on "Villiers S10/2". How did you get on with the restoration ? I have just acquired an identical machine and would be very interested to have any tips or advice that you may care to pass along. Aside from being a L6221R does the model have a name ? Did you manage to get all the transfers you wanted ? Is there a manual anywhere for the machine or engine ? What's the model number of the engine ? All info gratefully received.

Thanks for enquiry, I got it running quite some time again now. I just never got round to painting it - It's a great machine and I use it every week to cut the grass, it started well after being stored for the winter and I hope to get much more use from it! I do not think the mower has a name of such - The serial number basically means your mower was build in 1962 and is a 21" cut. I found all of the transfers on this website but just never got around to ordering them as I never painted it. As far as manuals and spares diagrams I never found any, there is however an exploded diagram for the carb which is liked in this thread i believe. The engine is simply referred to as a 'Villiers 49cc lightweight'. I had the issue that I thought it was the carb hindering the starting of the engine - it turns out it just needed a simple cleaning of the points (This was the first engine I ever restored so I was a bit low on the workings of an engine...). Just remember that an engine needs fuel, spark and compression and if you have all three, you should be fine.

Good luck with your project!

Hi Chris. Thanks for that. I

Hi Chris. Thanks for that. I have already got hold of the carburettor diagram. I need to set the points as well. The nut that secures the crankshaft pulley to the flywheel is really tight. Do you know if it is a left or right hand thread ?

Just to add - the width of my

Just to add - the width of my cutting cylinder is just 12 inches.

The flywheel nut has a right

The flywheel nut has a right hand thread but will be tight as it has to secure the free running flywheel on its taper; Villiers even supplied a "flogging spanner" that could be hit with a hammer to achieve final tightening. When shifted, the nut will undo a couple of turns and then go tight again as it's designed to pull the flywheel off the taper.  The whole operation will be made a lot easier and safer if you acquire or make a device for holding the flywheel to avoid skinned knuckles or broken cooling fins. 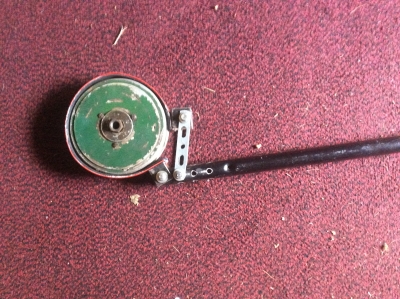 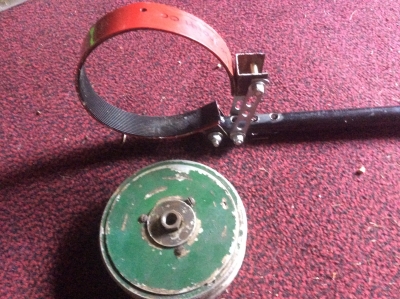 where can I get spare parts for carburettor Villiers s10 / 2, I need parts Banjo screw (31) and some other parts.