An interesting mower with some information already on this website, acquired this week & looks to be in original colours. I do like the height adjustment, reminds me of a 'Clapometer'!!

The mower was manufactured by Excelsior Motor Cycles in the early 1930's fitted with a Villiers Midget 98cc engine.

Whilst a 1934 advertisement states that the mower is fitted with Excelsiors world famous two stroke engine? At that time they were using Villiers Midget engines in their low cost motorcycles, therefore perhaps the ad was referring to villiers.

I know a member does have a similar model with a twin port engine, but perhaps a one off modification. 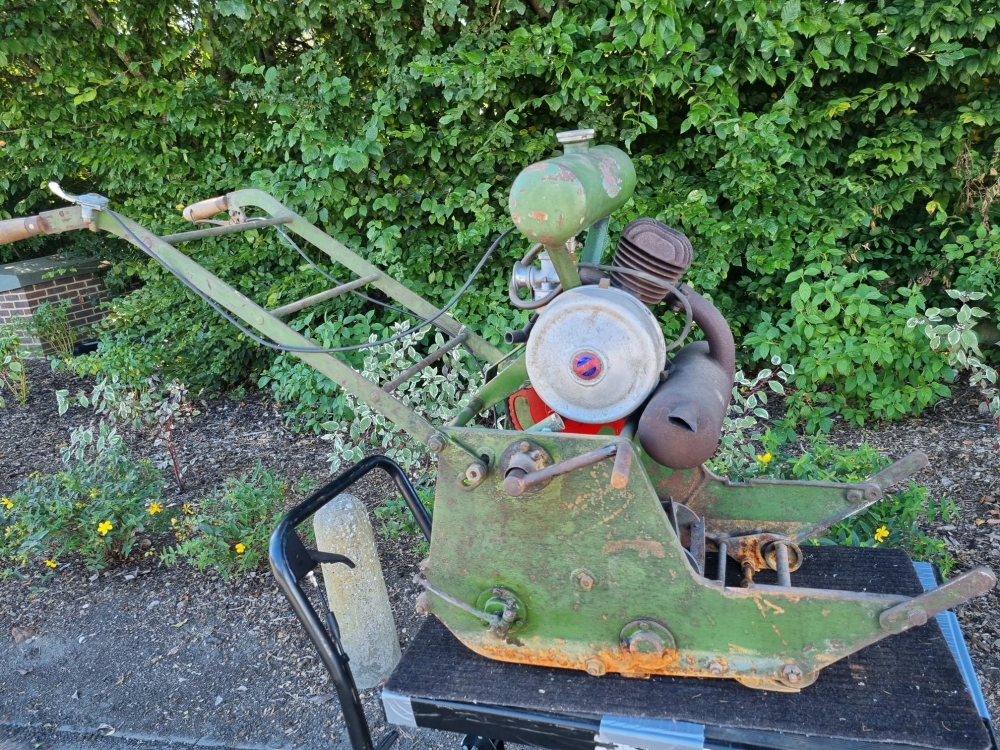 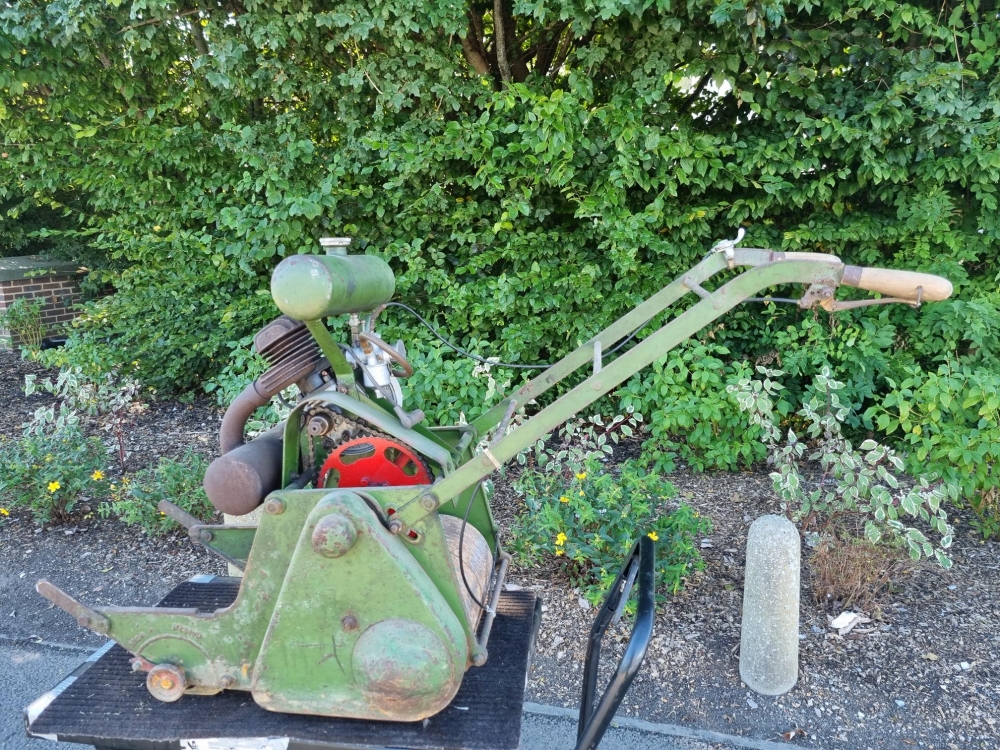 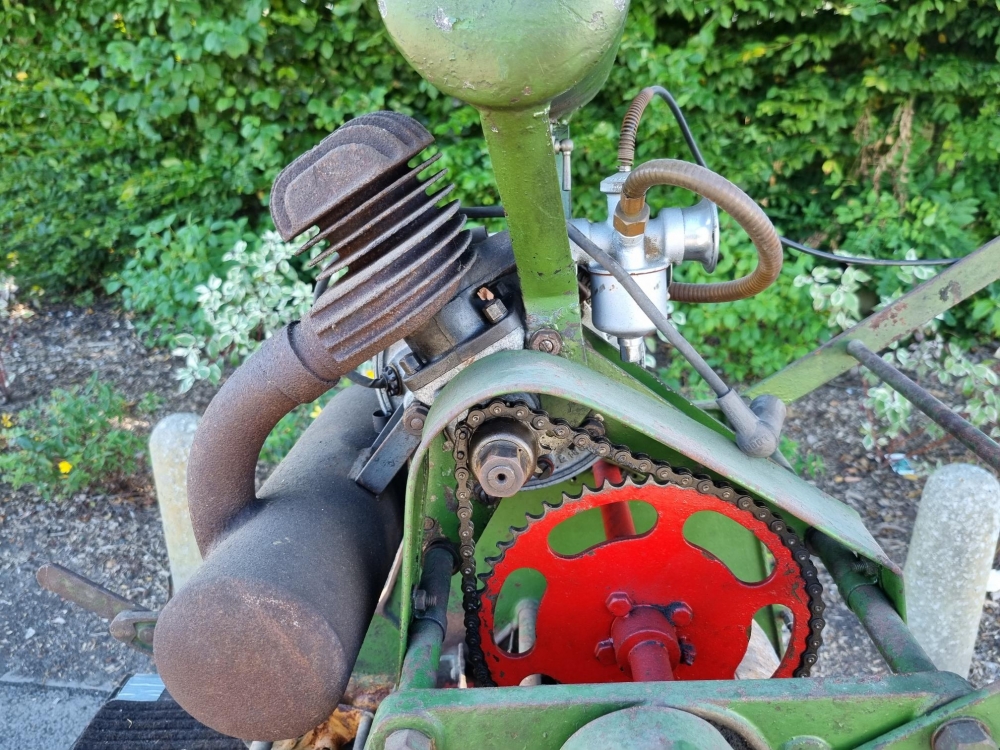 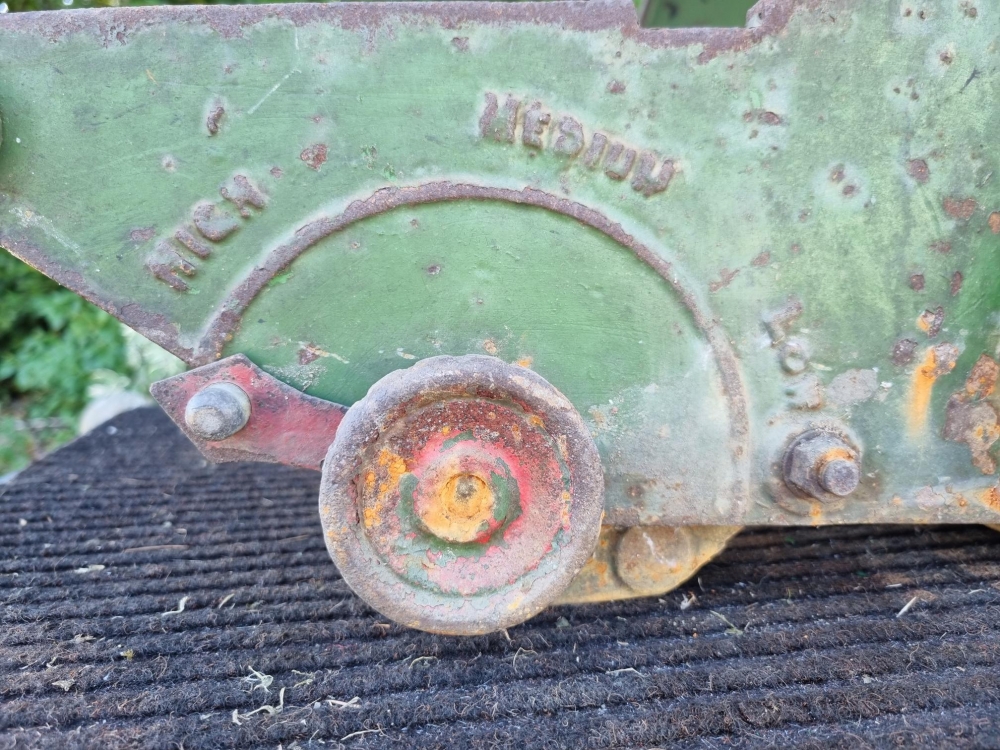 I'm not so sure there aren't

I'm not so sure there aren't some Qualcast parts on that and you will have noted some similarities in design.

A very interesting mower Clive. A nice old mower.  On the face of it, it doesn't look like it'll take much to get it up and running. I agree the height adjuster is quite amusing but seems very effective.

Intriguing - I wonder whether

Intriguing - I wonder whether one person worked for a number of companies in quick succexsion as this reminds me of the Qualcast 16, as did another mower posted here recently that I can't recall the name of.

Nice machine, I take it this was the one from "that auction site"?  i did debate going after it but didnt in the end (obviously).

with regards to the above comments about simularities  to other machines i have always thought that the Excelsior/Qualcast 16 and Arundal Presto MM all look very inspired by one another, very close in design but with subtle differences

Yes agree, the Qualcast 16 is

Yes agree, the Qualcast 16 is similar &  perhaps they copied the Monarch which was being sold in 1932, whereas the Qaulcast 16 didn't appear until 1934 & the Presto Rollmo in around 1937?

Yes Ricky, it was the one up for auction, I initially dismissed it as central London & sod of a journey also within emissions zone, but seller was kind enough to meet me in Guildford so all good.

Thank you, it was the Presto

Thank you, it was the Presto I was thinking of!

Interesting to see another

Interesting to see another 98cc Monarch. One of these turned up in Sydney Australia a few years ago.  I have a bread bin tank model fitted with a Villers 6D 122cc engine.  This engine came out in 1926 as a motorcycle engine but seems was not a success.  I surmise Excelsior's purchased a job lot of unsold engines to use in their first Monarch mowers.  They even utilised a twist grip throttle control.  At one stage I had another similar model but with a conventional fuel tank.  Clive's mower would appear to be later in the 1930's as it has the later version of the mark 1 Midget engine.

In way of explaining, the motorcycle Midget was introduced in 1931 and not long after saw mower use. It was produces minus the compression release valve. The most popular use was in the Qualcast 16.  In 1935 Atco introduced a lightweight with their own version of the Midget, a flange fitting exhaust, vertical head finning and more generous finning on the exhaust manifold for improved cooling. Later in the 1930's Villiers produced an improved mower Midget incorporating some features of the Atco version.

Interesting that Atco had such a large use of Villiers engines that they could request their exclusive design features, whereas Ransomes and others just had use of the standard Villiers designs.  Actually Atco were responsible for the very first Villiers 98cc Prior to the Midget. This was in the 1929 HY 12in, but this was it's only limited use.

Sorry about the boring tirade but sometimes an explanation has to be long winded!!

Thanks for that, not long

Thanks for that, not long winded at all, most interesting, yes others who have seen it are thinking more around 1935 for this particular mower, but obviously the model did pre-date the Qualcast 16.. Thanks again.