Good Morning from Tuscaloosa, Alabama. I am an historical archaeologist at the University of Alabama. In some recent excavations we discovered an old cylinder lawn mower. I initially I could just barely make out that there was raised lettering on the outside. Now that it has been undergoing electrolysis, I was able to make out "The Drummer" on the outside of both wheels. I can also make out U.S.A. on the inside of one of the wheels. Unfortunately, on that side part of the wheel cracked off. I think I can make out MADE IN U.S.A. mirroring on the other side. The wheel that is complete was also the more rusted, so it has been a process. I was just able to make out "The Drummer" yesterday. It looks a lot like the earliest images of the 1868 push mower patented by Amariah Hills. The wheels are cast iron and the brackets that attached it to the handle are wrought iron based on the wood-like grain of the metal. It never had rubber tires as the tread is molded into the cast iron. It looks like there was a roller attached at one time but broke off at some point. 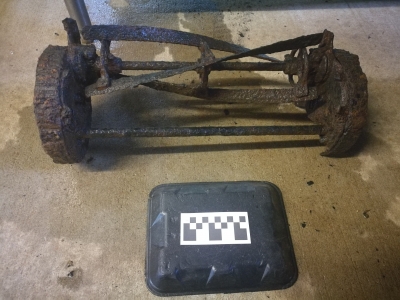 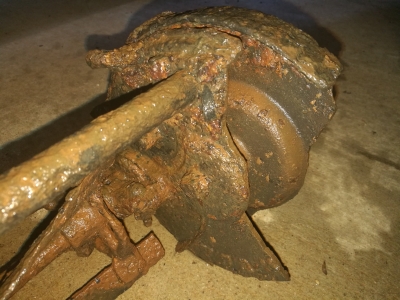 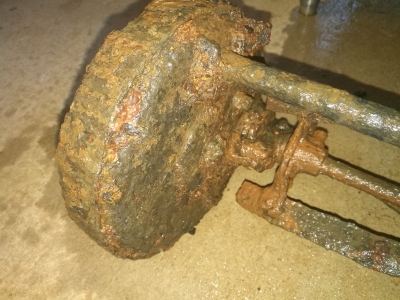 Great piece of work uncovering the mower, unfortunately I do not believe it is as early as you may think, it is a traditional design of side-wheel or reel mower as you say in the US, hundreds of manufacturers during the late 19th & early 20th centuries produce similar models to this. The Amariah Hills patent of 1868 was in fact for a roller mower not a side-wheel/reel type.

It looks to be quite wide, I would assume 16in cutting cylinder, it will probably be the model of mower that was advertised by hardware shops from 1910 in to the 1920's called 'The Drummer'. This is one of the advertisements we have,  June 1910