This Arundel Coulthard Rollmo was in my late father's collection. It was in generally good condition and seems little used, though it has had some rough treatment in the past. The guides for the front roller adjustment are damaged on one side as if the user had run into something hard, and one of the wooden handles is at a different angle to the other, perhaps a result of the same mishap. However both the cylinder and bottom blade look as if they have plenty of life left in them and have not been sharpened very often. I took the mower to pieces as far as possible, though I was unable to remove the gear from the rear roller shaft despite a long soak, and likewise the pinion which drives the cylinder blades. Any advice for removing these two gears safely? As a result I was only able to sharpen the cylinder blades by draw filing each one individually, and the same for the bottom blade. Nevertheless the lawnmower gives a good cut, and is a quiet and ecologically-friendly alternative to my Qualcast Punch Classic 30 electric lawnmower. This Rollmo never seems to have had a grassbox, as the plate behind the cylinder which would throw the grass cuttings forward is absent. I read that surprisingly to me these two items were sold as an optional extra on some lawnmowers, is that correct? Completion of lawn mower refurfishment and trial run supervised by Daisy the Cat. 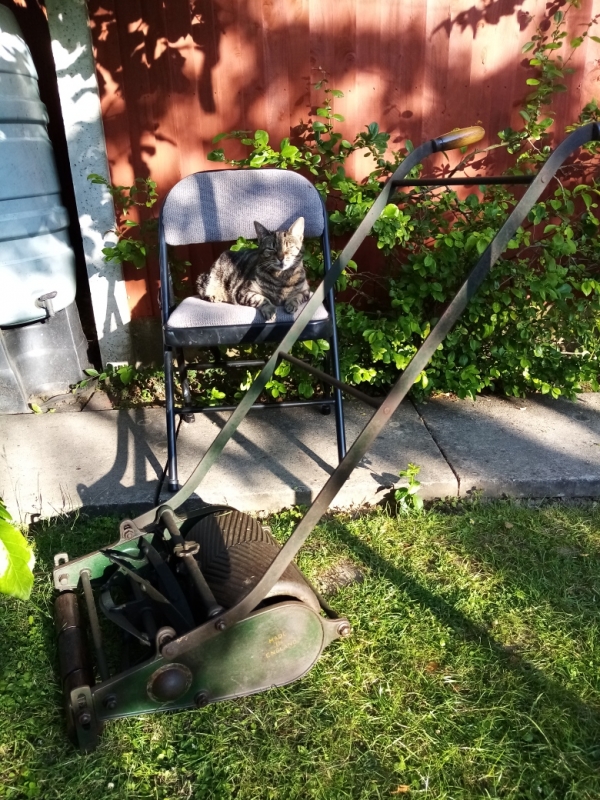 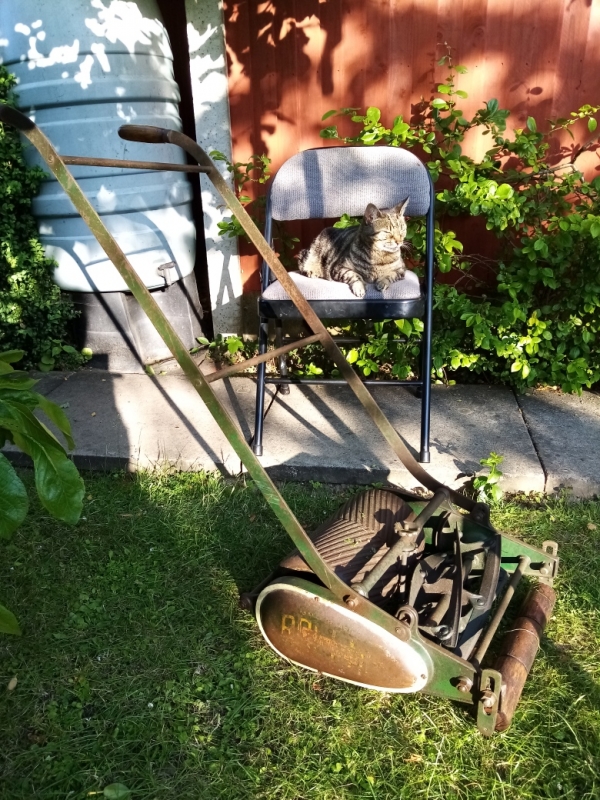 A nice little mower, often overlooked, but well engineered, they certainly came with a choice of sizes & gearing the roller mower being introduced around 1933, a brochure I have for 1935 lists four versions of the roller mower the name incorporating the number of blades followed by cuts per foot, they were the Five-Fifteen, Six-Eighteen, Eight-Thirty two, & Six-Twenty four. The first & second machines in 10in & 12in, the others in 12,14,16in & 10,12,14,16in. With most roller mowers the thrower would have normally have been in place with possibly an option of a grass box? certainly the side-wheel mowers were the ones that often came with the choice of thrower & box as extras.

The early ones as above came in Blue & Gold, both mower & box.

I think the gear and pinion are secured by a key which needs to be tapped out (shown on the 1935 parts list) before possibly using a gear puller.

Never actually stripped one, perhaps another member has?

Thank you for your kind reply. It is a 5/15 and it is a 12 inch model. If you were able to find a box that would be great! Yes both the gear and pinion are secured by a key as there is a key way in both shafts, but I assume it is a semicircular gib key and so hidden under the gear and pinion. How does it appear on the parts list? No key head is visible so I believe it would be possible to remove the gear and pinion by sliding them off the shaft and key. As you can see from the photos, the mover still has most of its olive green paint and the original transfers.