Hello. I have recently inherited a Ransomes Fourteen Mark 1 and would be interested to know if its date of manufacture can be determined.  The plate on the side of the machine shows it as a Mk 1 with Reg no DF1665.  One clue is that I've been told that the metal air filter, which does not have the cylindrical cover with the paper filter, was the standard fitting on early models (see photo) and that it may date from between 1963-5.  Is there a way of checking exactly? 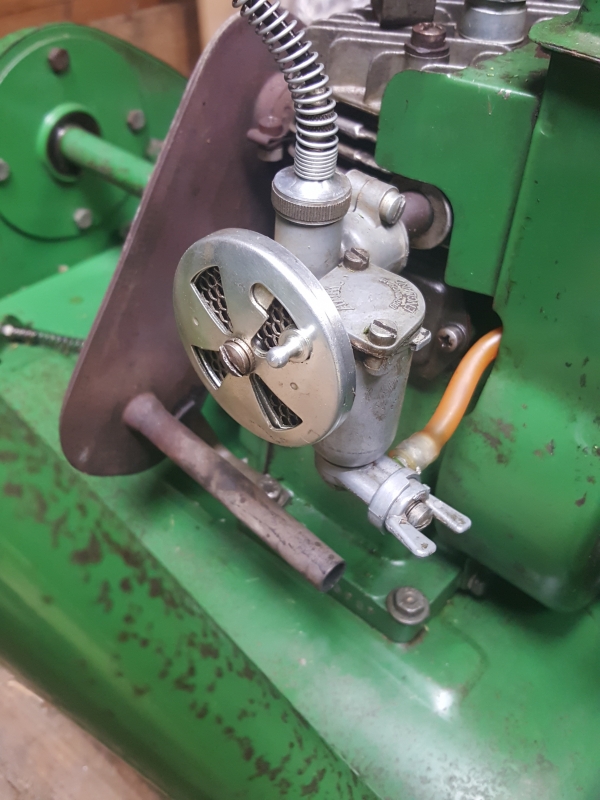 Having checked the H&D

Having checked the H&D Ransome records, Patrick, this machine was manufactured in August 1964. & the retail price was £42-10s-00d at that time. (No Purchase Tax or the later VAT).

The Ransome 14inch Fourteen was launched in 1964 as a replacement for the Sprite mower from 1963, of the same size & with a similar 65cc 4 stroke BSA engine. the Fourteen was also available as a Battery Electric model. A 16 inch Sixteen was added to the range during 1965-66 looking very similar.

Your air intake was a standard fitting on that Amal carb in other uses, but the additional round air filter with paper element specified by Ransomes was standard on this model of mower, yours seems to have gone missing. It would be worth trying to find the air filter, for originality, but the mower is still OK to use as it is now, because it does not create a lot of dust in normal working conditions.

This mower is a very quiet machine to use & smooth to operate, it was very popular when we were selling them in the 60s because of it's easy to use centrifugal clutch & solid motion on the lawn. As far as I can remember it was also one of the first Ransome machines to sport the new "By appointment to HM Queen Elizabeth 2nd" Transfer on the grassbox as that had only been awarded to Ransomes recently. Previously, up to 1963 Ransomes had been using a similar earlier award from "The Late King George VI".

Peter Hampton  "In the Garden Machinery Business since 1963"

They do not make little

I have a couple of Mercury

I have a couple of Mercury 16inch mowers, they are such an unsung hero of the Ransome range, just like a smaller Marquis.

Unfortunately The Mercury was dropped from the range when the Sixteen model came in in 1965-6, Although I did see a brand new looking Mercury in an Ironmonger's window display in Wallingford, Oxon, in 1969. Obviously an unsold carry-over from a previous a year's stock, or a serviced used machine. So proving that these things can only be dated from manufacturers records & not an Invoice.

Leaflets can also be misleading when dating mower histories, because they often have previous years models featured or are printed several years after the first models were available, not always with the updates featured in the pictures.

Most of my collection is of Ransome's origin, a few rarities in there too.

Thank you Peter for that

Thank you Peter for that information, just what I was after.