I have just joined the club, and from my user name you may detect that when I entered the world of employment in 1965 I worked for Qualcast Lawn Mowers Ltd in Derby.  I completed a five year Design Office apprenticeship and then worked for a further three years before moving to other employment in 1973.

During this time I worked on a number of new products, including the move to more plastic injection mouldings and aluminium castings (following the merger of BIRMID and QUALCAST).  I designed, single handed, the original Qualcast Concorde at the end of my apprenticeship, and when I left they had two permanent production lines turning our 500,000 per annum.

I have a small collection of lawn mowers, having increased this after discovering some of the models that I worked on.  I have the following: 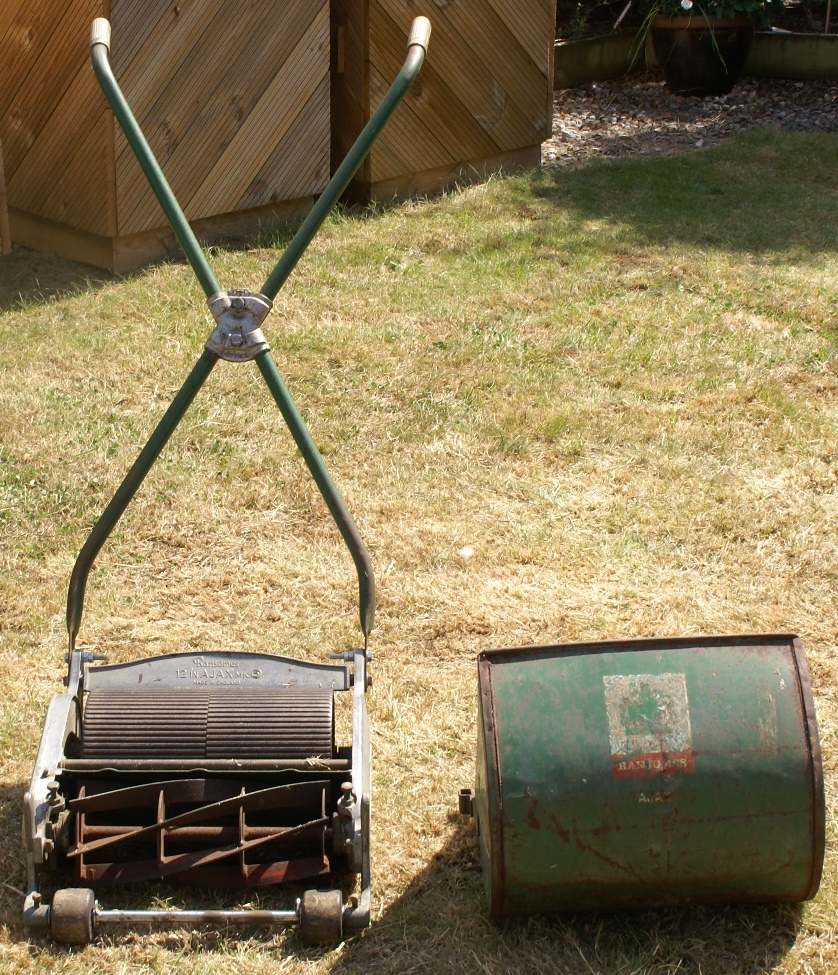 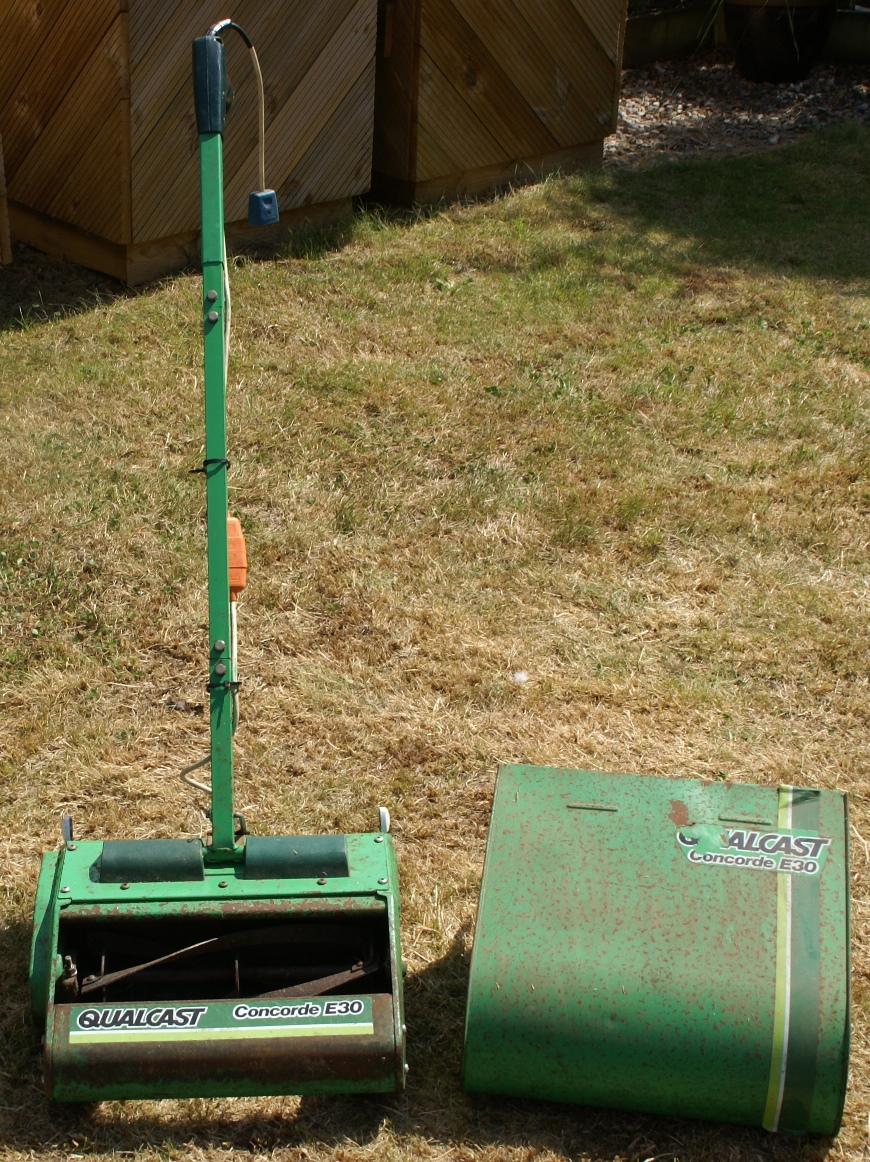 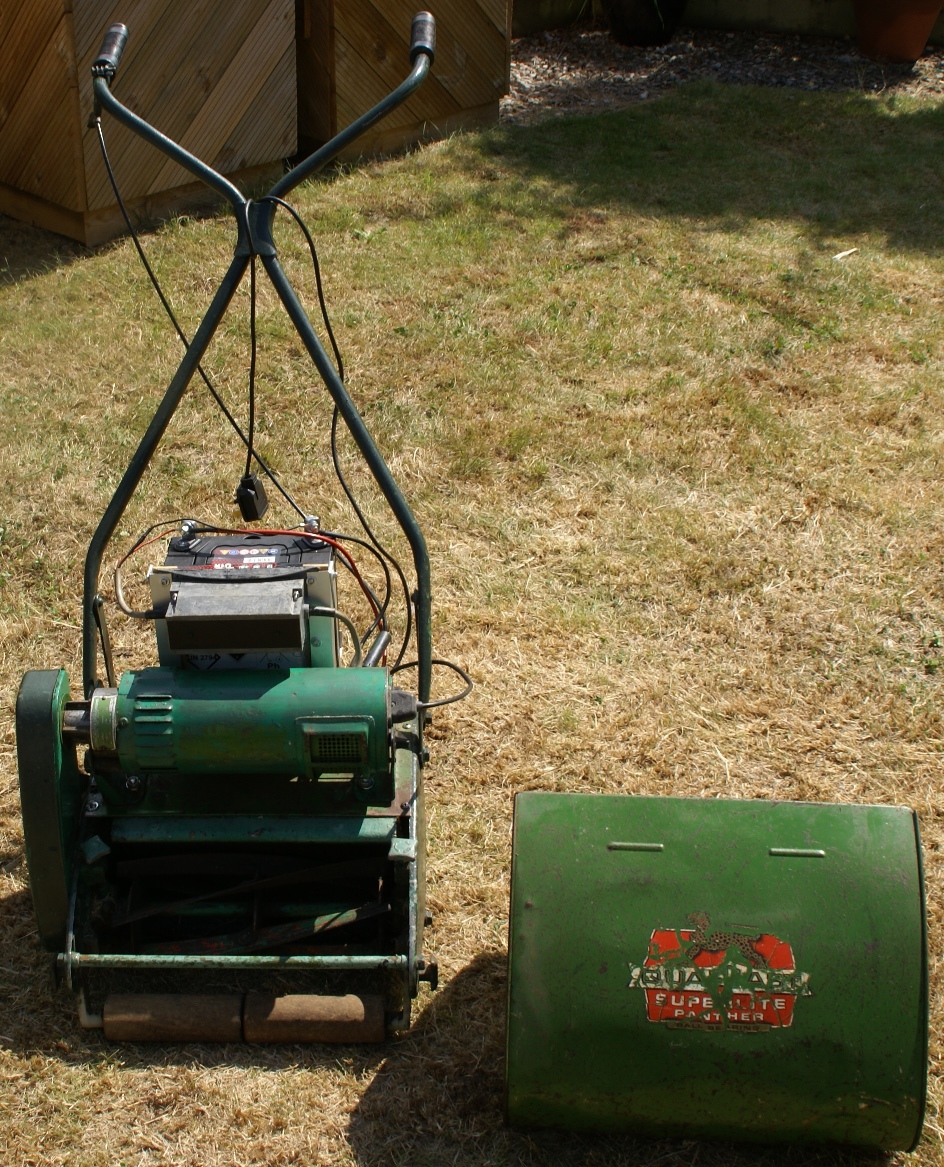 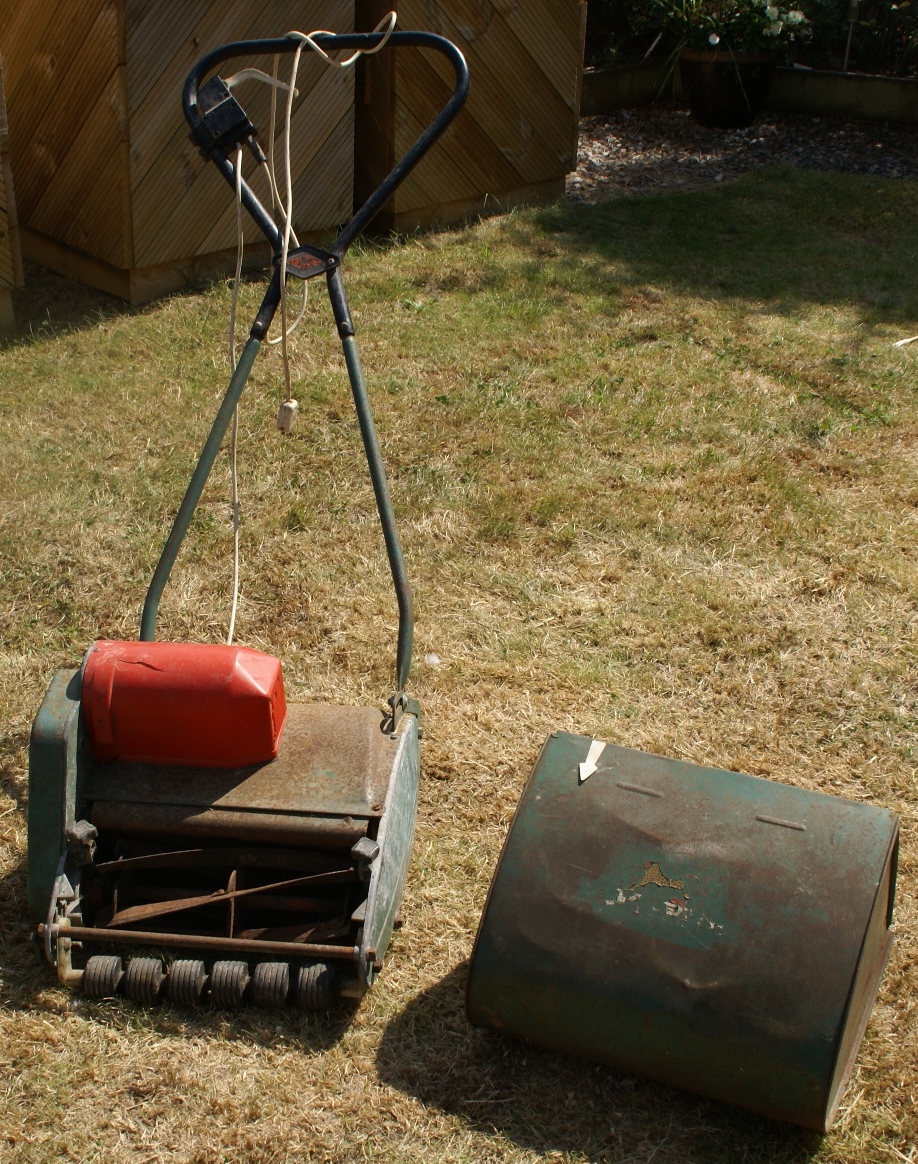 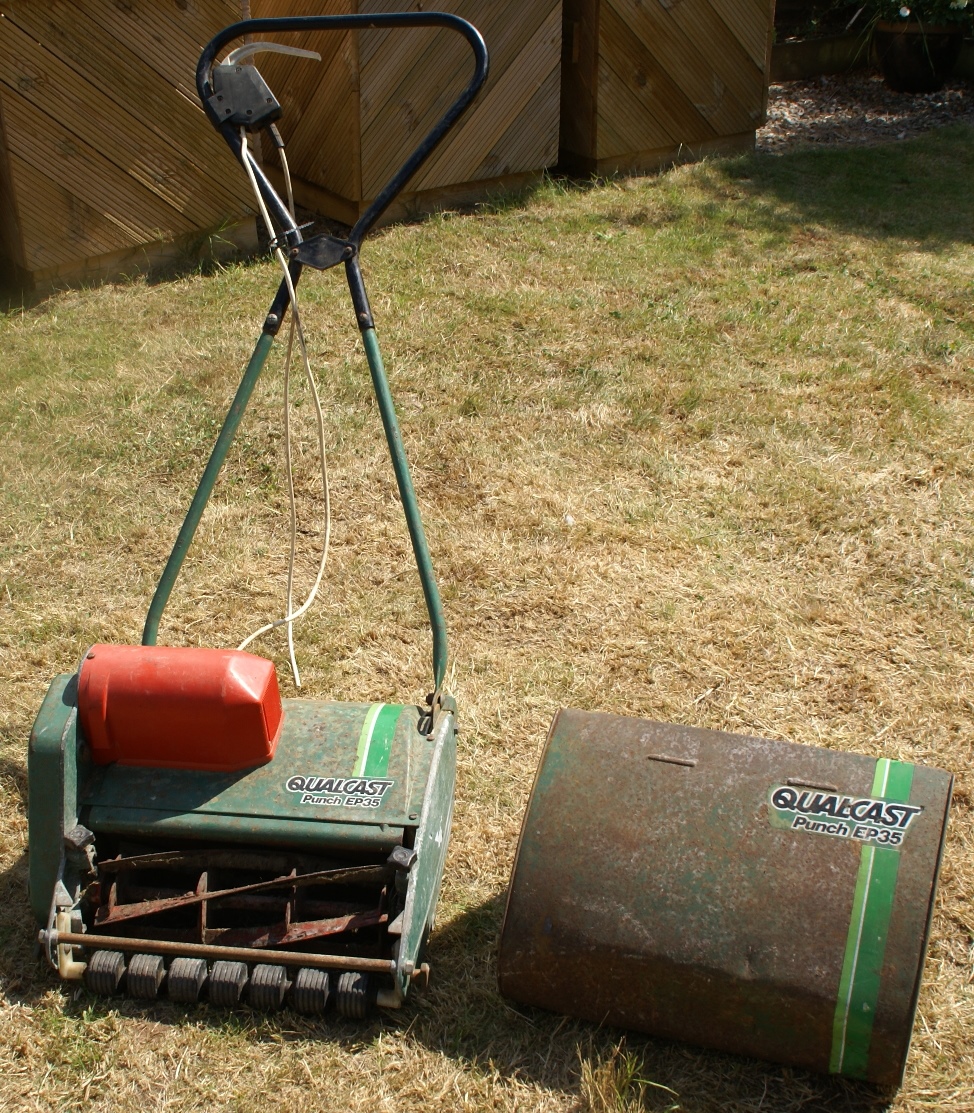 HI, did you have any input into that 'thing' called a rota-mini ?

I remember the Concorde well, it was more like vacuuming than mowing :D

I did encounter the Rota-mini, which was designed by the team at Suffolk Lawn Mowers in Stowmarket as an answer to the Black and Decker Lawnderette.  It was to be made at the Qualcast factory in Derby and so the prototype plus drawings were shipped up for the Production Drawing Office to design the press tools, jigs and fixtures to manufacture it.

The prototype and drawings were handed to me to check that the dimensions, particularly the limits and fits would allow assembly without having to adjust parts to make them fit.  The plastic moulding covering the motor had slots in the top to allow air to enter to cool the motor, and slots at the base to exhaust the hot air.  As soon as I looked at this I commented that it would be dangerous to use if it started raining while it was being used.  This was because the slots would allow water to drop onto the exposed electrical connections on the motor and could bridge the double  insulation, making the chassis live.  A top cover was added, with grooves to maintain the original styling, but cause the air to enter at the bottom of the new top cover so that rain water could not enter directly.

At that time Qualcast made most of their money from hand mowers, and the Black and Decker Lawnderette effectively kiiled their main market overnight.  The Concorde, being a small cylinder mower, was deemed to be too different for B&D to copy quickly as they would have to work out the techniques of manufacturing the blades.  It had to be cheap to manufacture so that it could be sold at a price not much more than a hand propelled roller mower (like the Superlite Panther).  In those days cutting grass was very much the responsibility of the man of the house while the woman of the house would use equipment such as carpet sweepers to clean the carpets.

Women were also seeking equality and some single women were buiying houses with small gardens.  The design brief for the Concorde to be similar to the design of a carpet sweeper encouraged women to use it without fear of "highly technical things" such as lawn mowers.  That is why it had a single handle.  Much was made of the stripes made by the rear roller, but it was never intended to match the performance of a heavy roller in creating stripes.  Carpet sweepers were generally used pushing forward, pulling back, and then moving forward in a different direction.  This small machine would do that and even cut grass that was damp and long.  The 2,000rpm speed of the cutting cylinder made small work of anything I could test it on and threw the grass forward very well.

that battery one looks interesting

It is the first battery mower that Qualcast built, and is a 12 volt version of the model ESP (Electric Super Panther) with cast iron side plates and the motor in a steel tube.  The ESP was 240 volt and required an earth connection for safety.  It was designed prior to the introduction of double insulation.

The model SPB (12" Battery Electric Super Panther) was designed to use a Lucas 12 volt, six cell dry charged (lead acid) battery, and was even supplied by mail order (through catalogues) with a pack containing six sealed plastic bottles of acid and a special funnel.  Each bottle held sufficient acid to fill a single cell and was piered when it was pushed into the funnel, emptying its contents into the battery without spilling any.

The mower positioned the battery in a polypropylene moulding and clamped it down using bolts through the roller cover, and had a top moulding to give a somewhat streamlined appearance.  I do not have that cover.  I picked up the mower free of charge from a local resident who had used it for 25 years with no problems, but it suddenly died.  He had used a battery that was far too large for the mower, and it held a consistent charge of 12 volts.

I took it home and placed a volt meter across the battery.  It did show 12 volts until I switched it on when the voltage dropped to just over 1 volt.  In order to check that it was the battery that was faulty and not the motor I set about removing the motor from its tube.  It looked as though I was disturbing a guinea pig's nest as it had been used extensively without the foam filter in place.  After stripping the motor down and cleaning it thoroughly I reassembled it and tested it using the same battery - still 1 volt when switched on.  I then connected the motor to the battery in my wife's car and the motor ran very sweetly.

Being a 12 volt motor simplifies the wiring, although the design incorporates a double insulated battery charger mounted in front of the battery.  There is an interlock knob that, when positioned for charging, reveals a three-pin plug.  A separate three-wire mains lead plugs into this on-board plug, with the earth lead connected to the negative (chassis) side of the motor.  The interlock makes it impossible to switch on the mower until the mains lead is removed and the on-board plug concealed.

The lawn mower battery that I could purchase is a few millimetres wider than the original Lucas one and so I have had to cut away the sides of the polypropylene moulding and attach some aluminium angle to widen it.  It works a treat now, but I need to construct a suitable cover (probably wooden) to make it look as it should.

I remember the development well, despite it being ages ago.  At that time Qualcast had a policy of requiring accurately detailed drawings of all bought-in items so that the Goods Received Department could check that the items received were correct.  A colleague of mine, believing that the dry charged battery could not work without the acid polaced his steel rule across the terminals to check the measurement.  There was a very loud bang and he was left shocked and with a steel rule with a piece missing part way along its length.

One customer who purchased a mower via a mail order catyalogue believed it to be safe to try switching it on because the acid was still in the pack and not in the battery.  He had unpacked the mower in his lounge and was startled to find that hr suddenly had a 12" wide swathe across his deep shag-pile carpet.  He complained and sought compensatio, but as he had not followed the instructions I don't know whether he was successful.

It is basically an EP Panther with a 12V motor and fitted with a 12V battery, Exide 101 if I remember correctly. There were quite a few different battery mowers about when I started work, now they have started to come back.

The battery mower that I have is definitely model BSP (Battery Super Panther) with cast iron side plates, and the original battery was Lucas.  You may be thinking of the later battery version of the model EP.  That may well have been Exide as I have seen a battery list from them.

The mains version with the motor in a tube was the model ESP (Electric Super Panther), again with cast-iron side plates.

The EP Panther was based on the Superlite Panther, with aluminium side plates.  I have two of the mains electric EP versions with red motor covers.  The 12" was simply known as the 12" Electric Panther, and the 14" I have from 1980 is the Punch EP35.