I have recently bought a Ransomes Cyclone mower which is powered by a JAP engine. I am given to understand that this is a rare lawn mower and was superseded by the Ransomes Whirlwind which was powered by another engine but is very similar in appearance. There's scant information on the internet. Photos to follow of my acquisition. 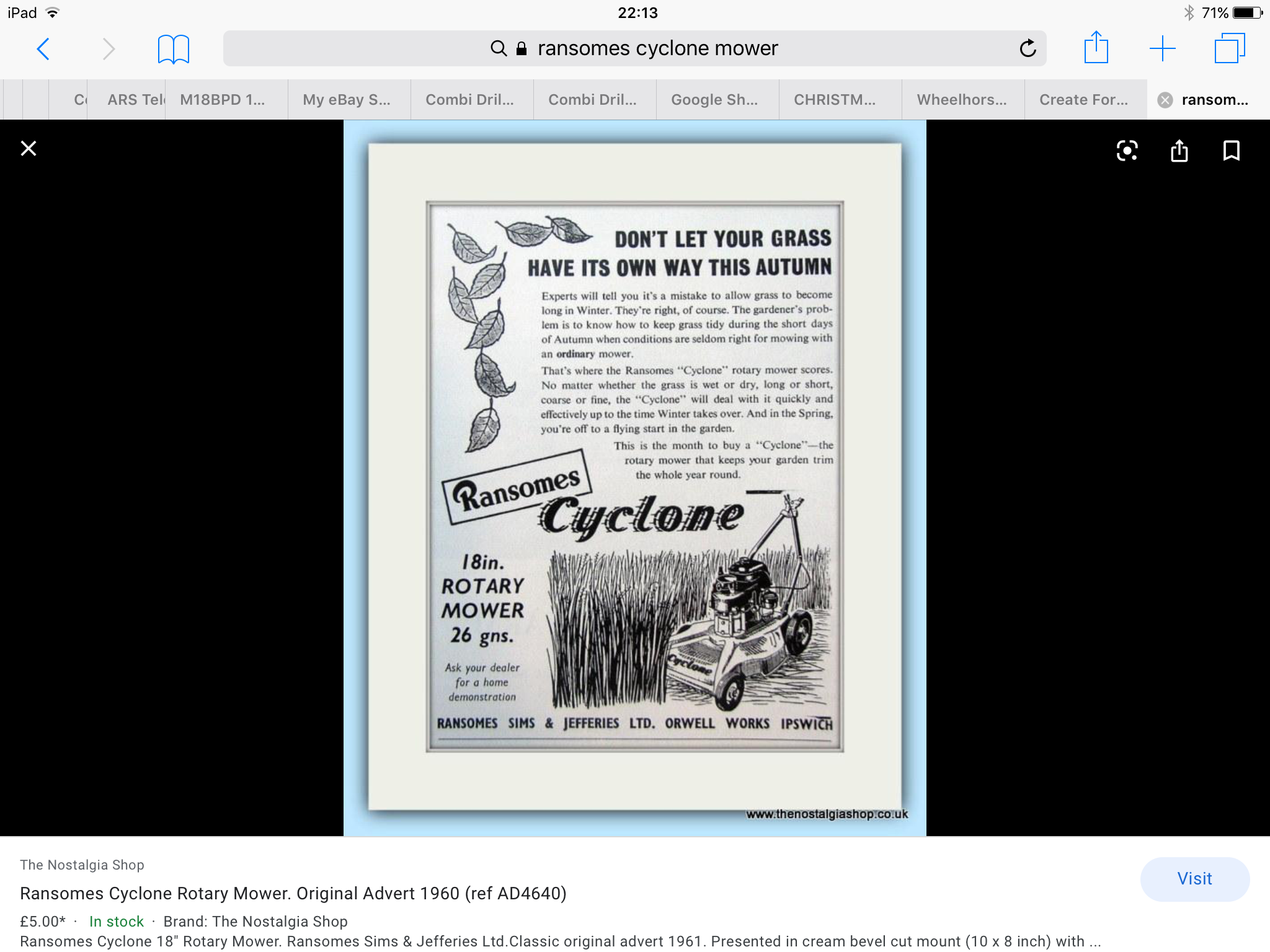 If anyone got information

If anyone got information pertaining to this model, I would be pleased to learn more about it. I usually collect Rotoscythe mowers but I thought this would compliment my Rotoscythe County. 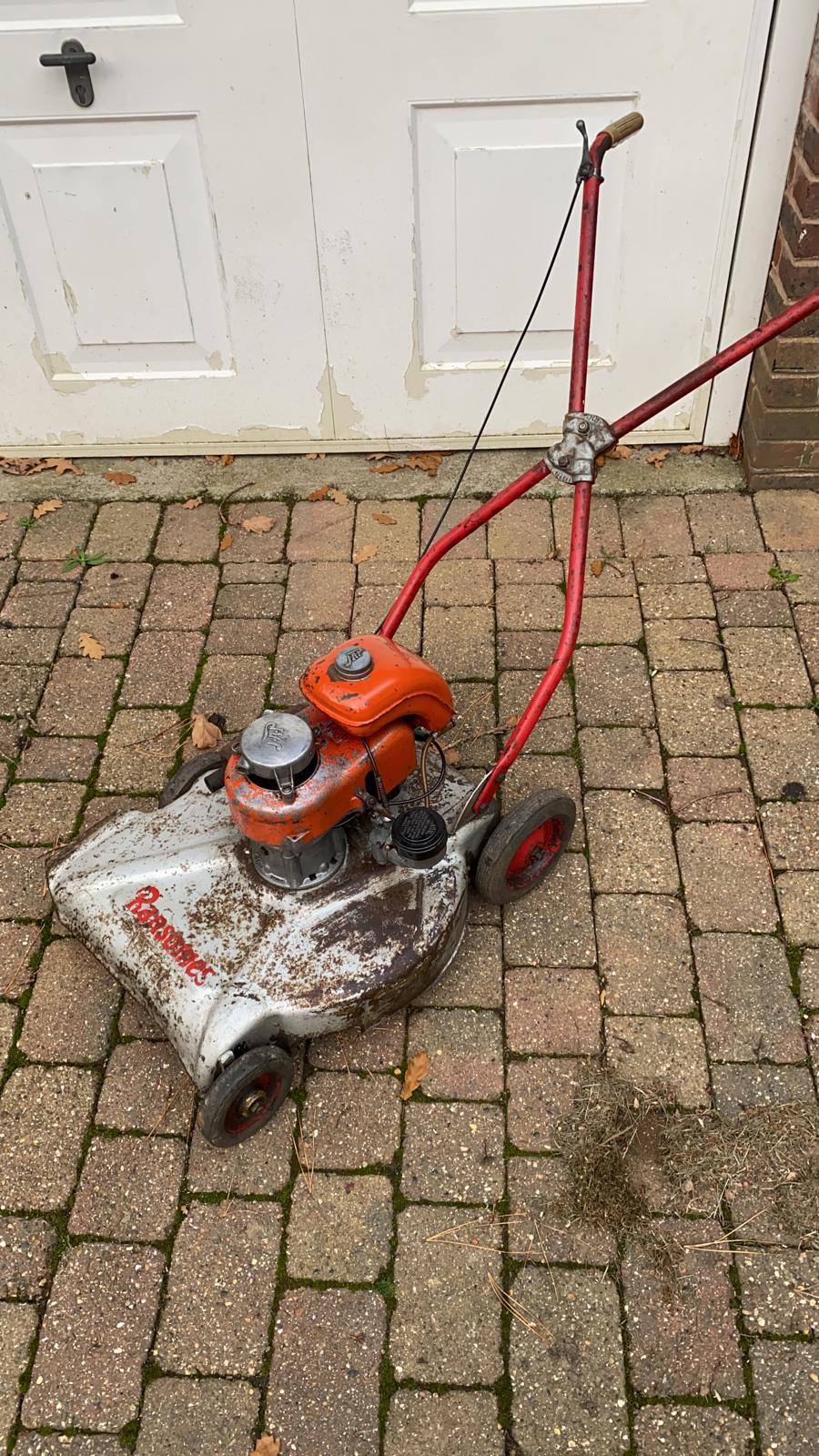 I like that , it’s survived well. The handle bar junction fitting will be familiar to anyone with a Ransomes Marquis. The machine appears to discharge the cut grass ahead of the right hand front wheel; a fact that has escaped the copywriter for the the advertisement , who had probably never ever used a mower.

The front discharge and odd

The front discharge and odd wheel configuration was quite common during the 50s and 60s, but never seemed to stick, I read somewhere it was to reduce scalping the turf when the ground was uneven, my Suffolk Galaxy has the same design. 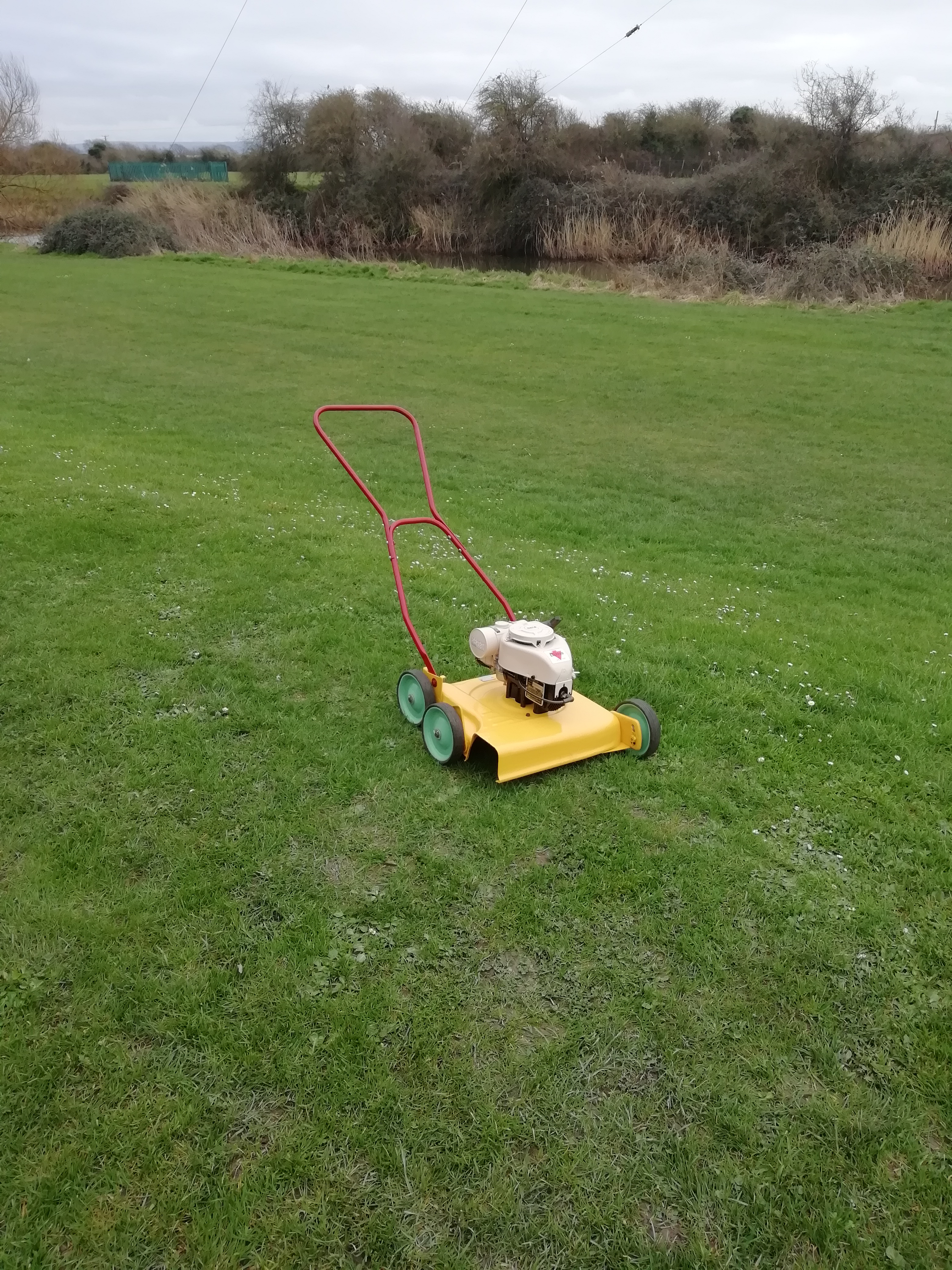 I wonder how many other makes and models are out there.

I needed to check but there

I needed to check but there was also a Ransomes Typhoon . There’s an ops manual for one on the bay of evil at present . I worked on a similar Ransomes rotary in the late seventies, no idea of Which model, but it had a Villiers Lightweight engine.

Yes the Typhoon superseded the Cyclone (not the Whirlwind which I stated earlier!).

Your mower looks very interesting Lee; it's a design that for some reason didn't catch on I believe. Maybe the aesthetics did not appeal to buyers? 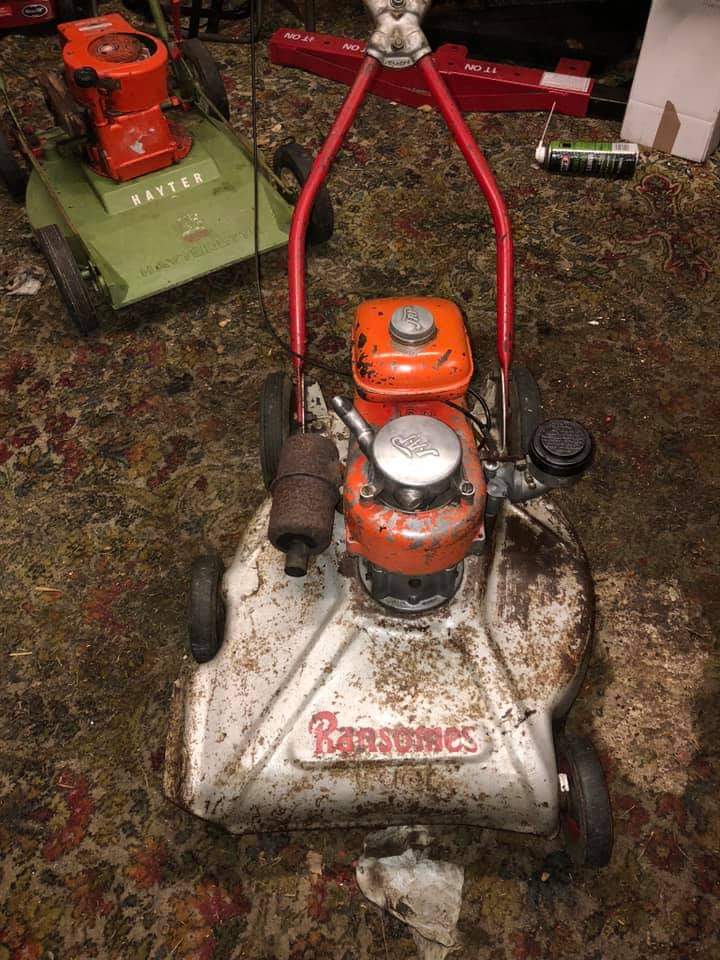 Maybe the aesthetics did not

Maybe the aesthetics did not appeal to buyers?

Aesthetics may be, but also the difficulty in fitting a grass catcher. Lawnboys had weird canvas bags hung on a handle bar mounted arm and  one model of the Landmaster Stoic an unwieldy steel mesh cage.

Yes a very nice example, the

Yes a very nice example, the late 1950's early 1960's rotary's are interesting mowers to collect & preserve, with some being quite rare.

The Cyclone possibly Ransomes first rotary mower? Launched in late 1957 & certainly well advertised in 1958. Superceded by the Typhoon in 1960.

Qualcast introduced a similar rotary mower in 1958 the 'Rotacut' & the same year Hayter with their first Hayterette.

So with only 3 years production not many Cyclones have survived. The Typhoon had a longer run around 8/10 years.

I only have a few bits of information on the Cyclone, but much more on the Typhoon 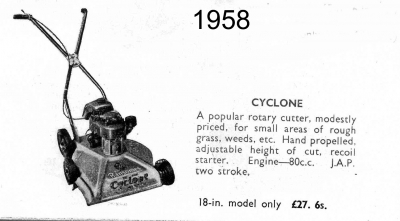 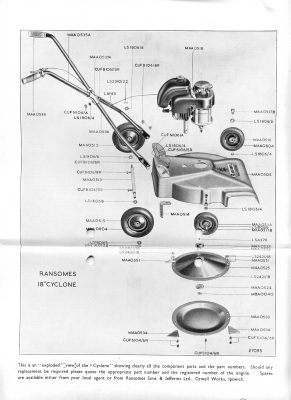 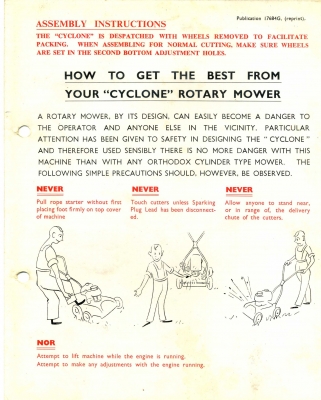 This is for members of the Old Lawn Mower Club,who would like an honest simple answer to the question of Ransomes Cyclone,not the potted I think I know version as in above!

Ransomes Cyclones were first manufactured in January 1958,they ceased production in August 1961.

From Ransomes records it states no machines had registration numbers,but I can tell you that 17,819 were made of which 397 were sold without engines.

You may query the last bit,but I happen to know where they went.

Ransomes had an agent in Belgium called Verbeek,I suspect those of you from the vintage world may realise the link (Fairground Organs).

Verbeek use to buy many machines off Ransomes without engines as they always put their own on.

Verbeek are no longer in existence,but I do know they use to have many very early machines in their stores.(Perhaps worth a trip Clive to Belgium)

Fortunately all roads lead to Rome with Verbeeks archives,so you will all realise they are safe in Somerset.To include absolutely piles of Ransomes 16mm films never seen before

Thanks for everyone's contribution. My plan is to give it a clean and apply a coat of Owatrol to preserve its original patina. I also need to give the carburettor a clean including the tank. As for the aesthetics, I like the quirky retro shape.

Does anyone know if there are

Does anyone know if there are other Cyclones (and its successor the Typhoon) out there? I understand from the seller that there's another one with a seized engine.

A reply to how many are out there,I have seen quite a few over the years,infact the last ones I saw were less than a year ago but all were in a very bad state of repair and were already in the skips,the real trouble being is how they were made,a steel pressed body not like the rotoscythes.Also in their time cheap and cheerful,being a contrast to their other professional models.

Interestingly Ransomes downside until recent years have always been their involvement with the domestic side of the rotary industry,compared with the mainstream professional machine,How they got over it,was to buy into their competition,an example was Hahn, and latterly Mountfield, (known jokingly in the trade as Ramfield). The most disastrous take over was that of Autocar (the main importers of B&S engines in the late 1970's) this action upset the city banks,so much so,that a new Managing Director was appointed by the city.

I do have allot of spare literature on these machines, and there counterparts to include mint sales brochures,or if you are interested you can look on that Auction site on the net,as I did here that,that scoundrel Mr Wallingfield is selling some next week!

Hi Triumph 66. Does the attached add anything to the discussion being another Ransomes Rotary mower? Apologies if not!! The document was obtained when I bought a job lot of mower literature off E Bay. Cheers. Rob 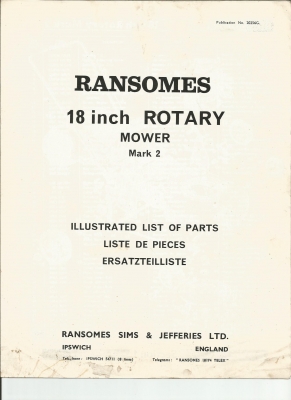 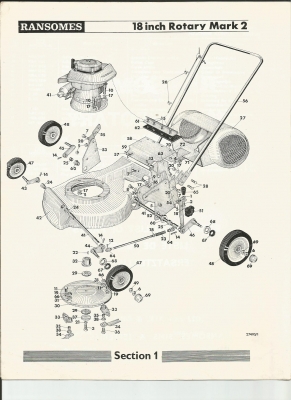 No, their most disastrous

No, their most disastrous mistake was to go on a buying spree in America, Cushman etc. They never should have listened to their accountants, a group of people who know the cost of everything and the value of nothing.

Again thanks for all the

Again thanks for all the inputs from all; much appreciated. I will have to check out Mr Wallingfield's listing......

Thanks for the information RansomesBob on the literature but I believe that could be for a later model of which I am not familiar with?

Thought I'd link into this

Thought I'd link into this thread, there is a Ransomes rotary being listed on marketplace, near Stanstead which is too far for me, needs some work but not a bad price. Could be of interest to ransomes rotary fans.

Looks like a Cyclone Lee? & in Stanstead Mountfitchet, brings back memories, worked there when I was 16, no doubt that mower was cutting grass just up the road!

The most disastrous take over

The most disastrous take over was that of Autocar (the main importers of B&S engines in the late 1970's) this action upset the city banks,so much so,that a new Managing Director was appointed by the city.

Are you sure about that? I thought that the Autocar that Ransomes acquired was a maker of golf buggies, nothing to do with B&S.

Briggs engines we’re indeed distributed in the UK by a company called Autocar Electrical who were based in Newington Causway just off the Elephant and Castle in SE London. They later moved the Briggs operation to Ripple Road , Barking, E. London.  Briggs then took UK distribution back into their control and set up shop in Brentwood, Essex . I attended service courses in both those locations.

I have decided, reluctantly,

I have decided, reluctantly, to sell the Ransomes Cyclone as I need the space and have far too many projects. Though I am in Devon, the mower itself is still at my friend's place in West Sussex between Chichester and Worthing. If you are interested, please message me. Thanks

Andrew, sent you a PM but

Andrew, sent you a PM but mail got bounced back. Is the Cyclone still for sale?

Apologies I have just seen…

Apologies I have just seen your post. Yes it's still for sale and I have just listed it on FB Marketplace and on various FB groups.

The mower is up for sale if…

The mower is up for sale if anyone's interested. The Ransomes is at a friend's house near Pulborough, West Sussex and not in South Devon.