Is this a controversial word from the dictionary for all collectors!

Just the other day I was asked to ID a Motor mower that no collectors had seen ,So is it rare? Well I suppose its the direction you are coming at.There are many categories of this,to list a few

Someone who is selling to get attention

A person new to a subject

Never seen one before

Not from the trade

All of the above and plenty more anecdotes.

A machine that commercially was not up to the job intended

A company un heard of

A company perhaps in depression years trying something new

Back in the late 1970's a gentleman who was known to the trade and Collecting was asked to do a talk on the History of Tractors at Reading University,his name Mr Charles Cawood (a great friend who I have missed these past years)

There were 3 seminars,the first over run,standing room only,to the third to many seats not enough bums!

The reason was simple,everyone who came in the first seminar wanted to hear about that rare tractor,the one that was the only survivor,why because it may have been too expensive in its day,not thought out to the market,or just bloody useless.Instead Charles spoke about at length the successful tractors,Ford Standards,The grey Ferguson and the most boring tractor of all time the Red International (a red box on wheels) because they were successful!

So how can we leave this contentious issue?

Only use the word if you know its proper meaning!

How often is this word used but know one can explain nice,well for the first time I am! here we go*****!

Nice is only to be used in the context meaning accurate as in nice engineering drawing! I bet that has opened your eyes! Any good Victorian dictionary will tell you

I hope this forum gets you all thinking and even allows pen to paper - as its about time more expression is needed in our fantastic subject of collecting.

My personnel view of the word RARE

It is a rare thing that I write today on this site to you all,it is most certainly rare that I have the time these days to sit and even think! We are in strange and uncertain times,times that we must think and look after our friends and fellow collectors and this forum is the most perfect way to do it.

This is a rare chance to raise a glass of a very good vintage Damson Gin 2016, from the House of Hall, and revive thoughts of along life of collecting.

What an interesting monologue and a rare treat in having you start a thread, is that the second bottle of Gin?

Anyway, back to the subject, earlier today the attached was circulated by one of our colleagues on another forum & perhaps this may bring a smile as some references can no doubt be applied to the mower fraternity. 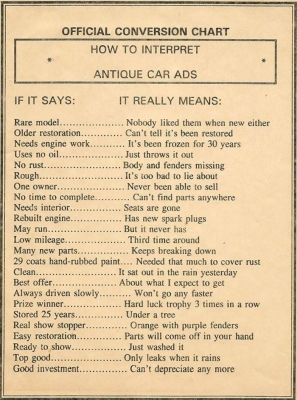