This  think is a 1970 Webb bought a last week. It appears to have an extra pulley system built in to the mower. The red cap come off and it looks like it drives something. Just wondering what and if it's unusual thanks 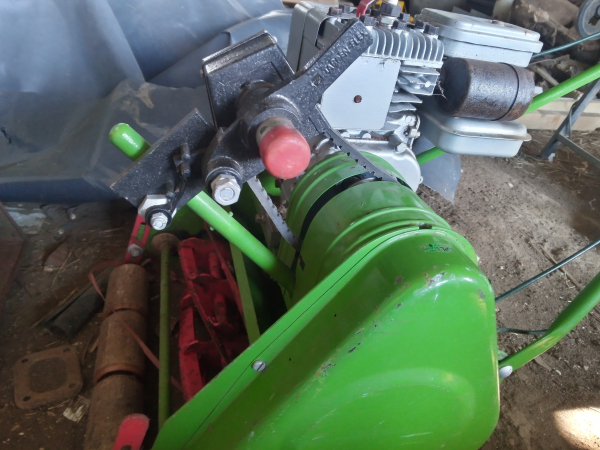 Yes it does, you will see by…

Yes it does, you will see by the take off it says "Tarpen Flex" you could connect a Tarpen flexible drive shaft & run a host of add on power tools, Rotary Tiller Hoe, Pruning Saw, Chain Saw, Hedge Trimmer etc.

In the late 1950's & 1960's it was called the Multi Purpose Motor Mower with the engine unit being detachable from the mower & placed on a transporter, similar to a wheel barrow frame, which could also be adapted as a wheelbarrow.

Not sure from your image if yours has the lift out or fixed engine? You could apparently take the engine out in 30 seconds by unscrewing two handwheels.

They also produced a 12in model with Magimatic control & a power take off at the top corner of the side cover.

In the early 1970's, certainly by 1973 the Tarpen Drive was dropped in favour of Webb selling Electric/Battery hedge trimmers, edgers etc.

I will see if I can sort some images for you.

The Tarpen drive pulleys and…

The Tarpen drive pulleys and adaptor brackets were also to be found on several machines including Suffolk Punches and Merrytillers, but as an accessory without the removable engine. The flexible drive shafts were made by a company called Heli-Strand, based at Rye in E. Sussex.

Thanks for that information…

Thanks for that information currently got mowers in bits as it will not start when I sorted that I will look out for some attachments for it.