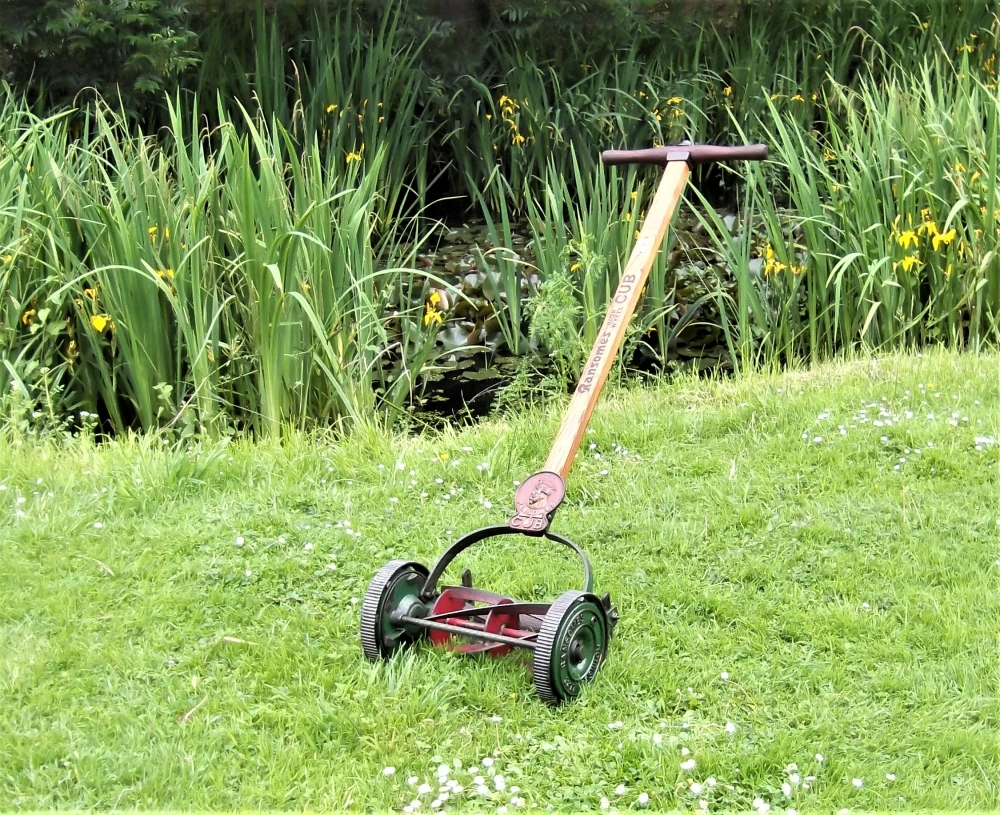 It seems to me that the Cub does not turn up quite as much as it should. Lions and Leo's crop up more readily and yet the Cub, which was introduced in the early1930's and still being advertised in the early 1950's, might be considered the ' entry-level ' machine. It was noticeably cheaper than the other two and very competitively priced compared to most of it's rivals. Available in 10"/12"/14" cutting widths, throw plate and grassbox of course extra ( 9/- late 1930's ) 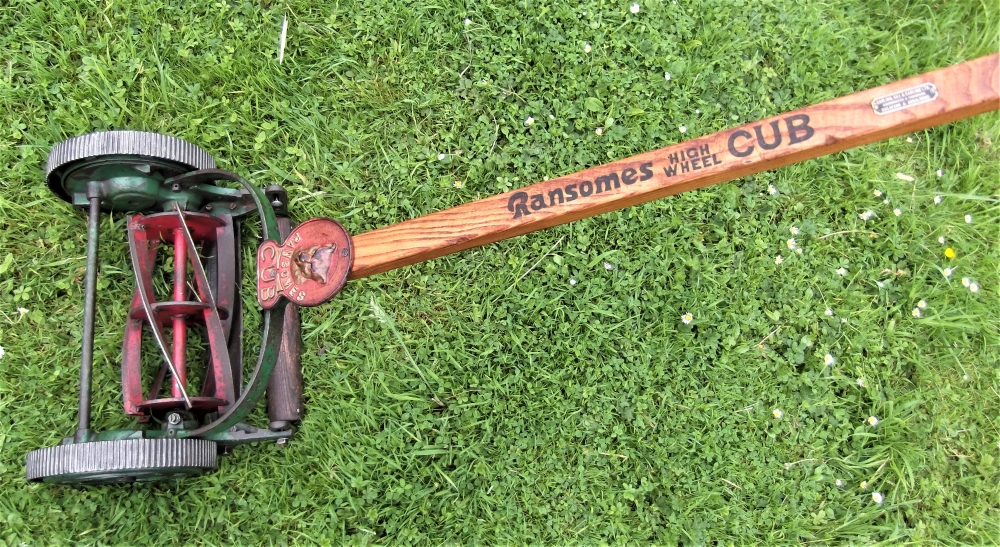 I have just got round to ' doing ' this slightly later improved version - the High Wheel, which also features a lipped bottom blade and adjustable cutting cylinder bearings. This is a 10" and the first thing you notice is how heavy it is, even in basic form. It's also got the added bonus of the retailers plate on the handle. 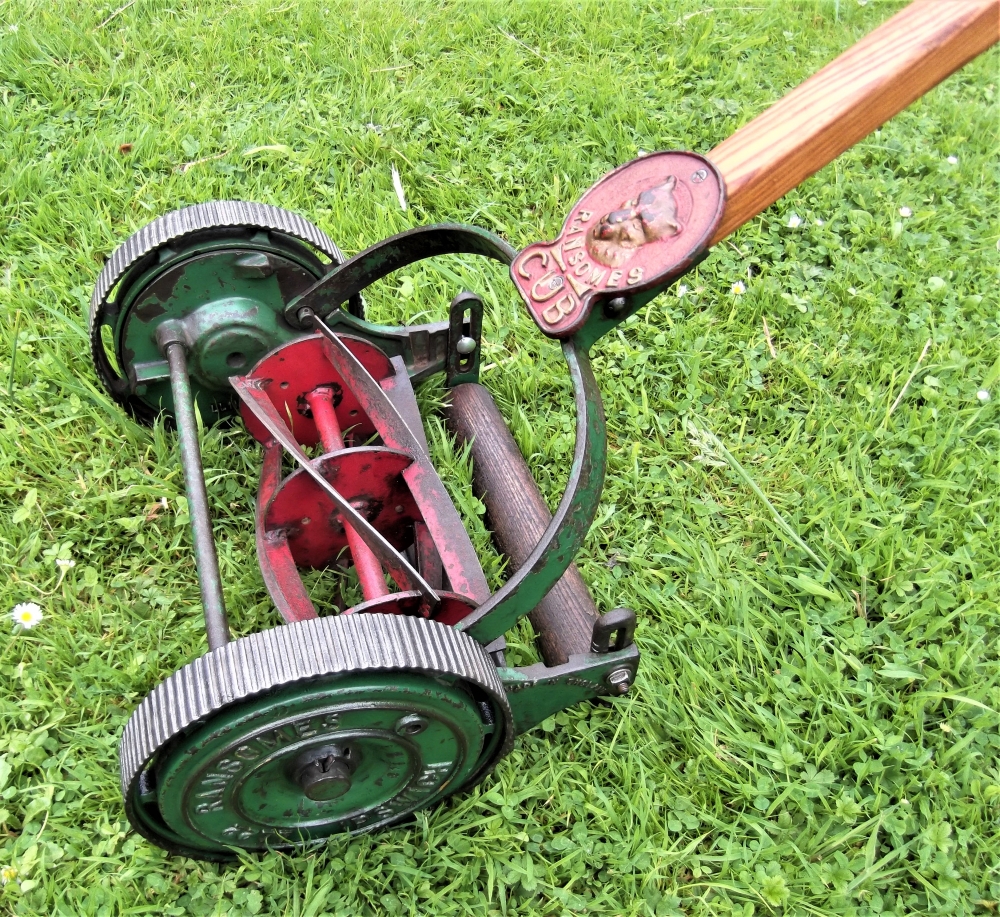 I'm a bit suspicious of this handle cross-piece. the fixing is original but it is clearly a different wood and the design is at odds with contemporary illustrations.

Another oddity for me is the fixing of the roller using two pins which go right through from one side to the other. On other machines the stub axles just screw into the ends of the roller and have no additional fixing ? 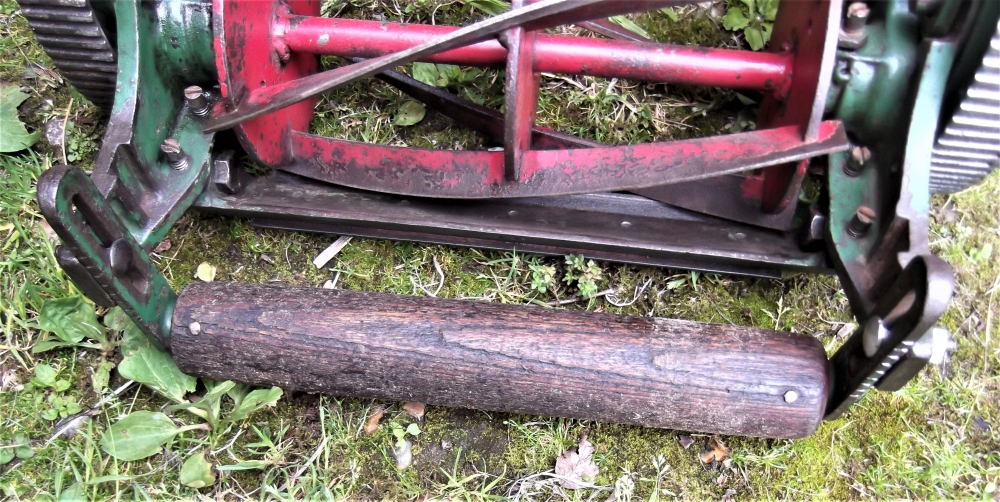 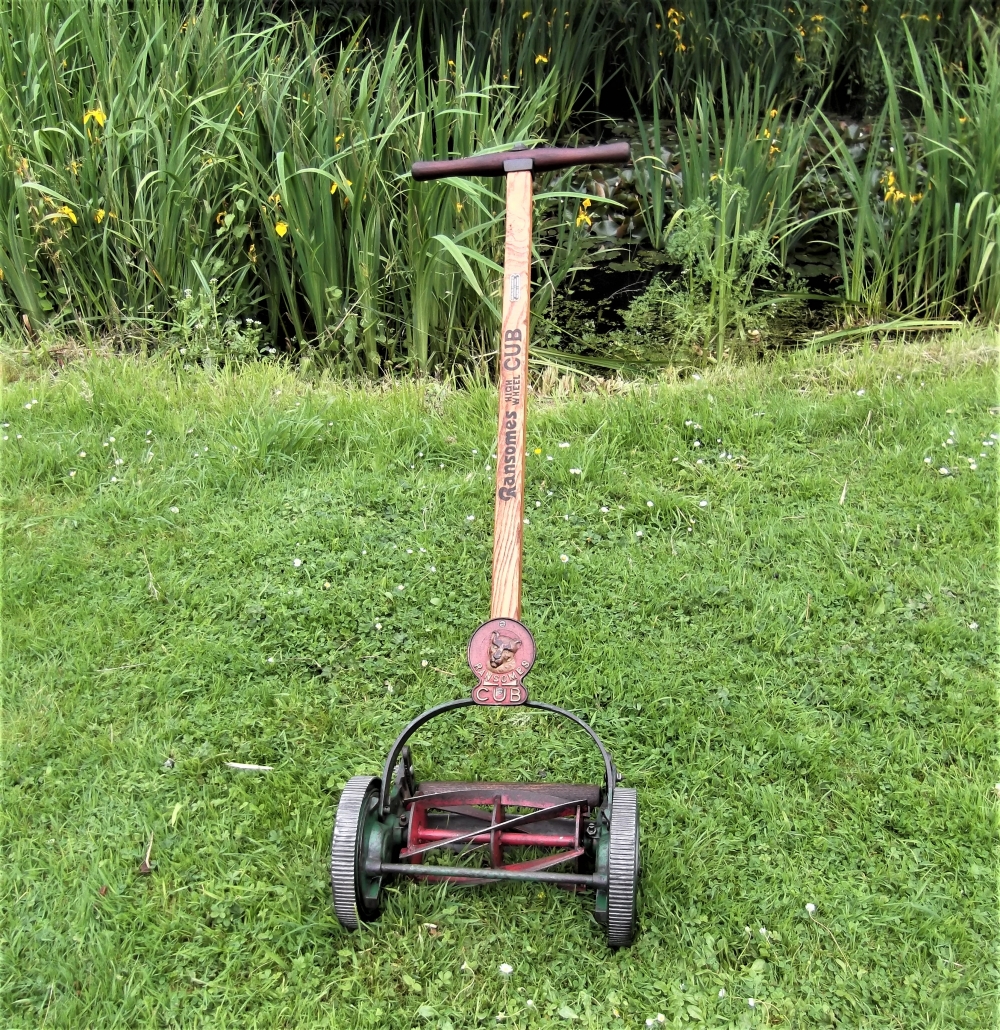 I can't help but notice that 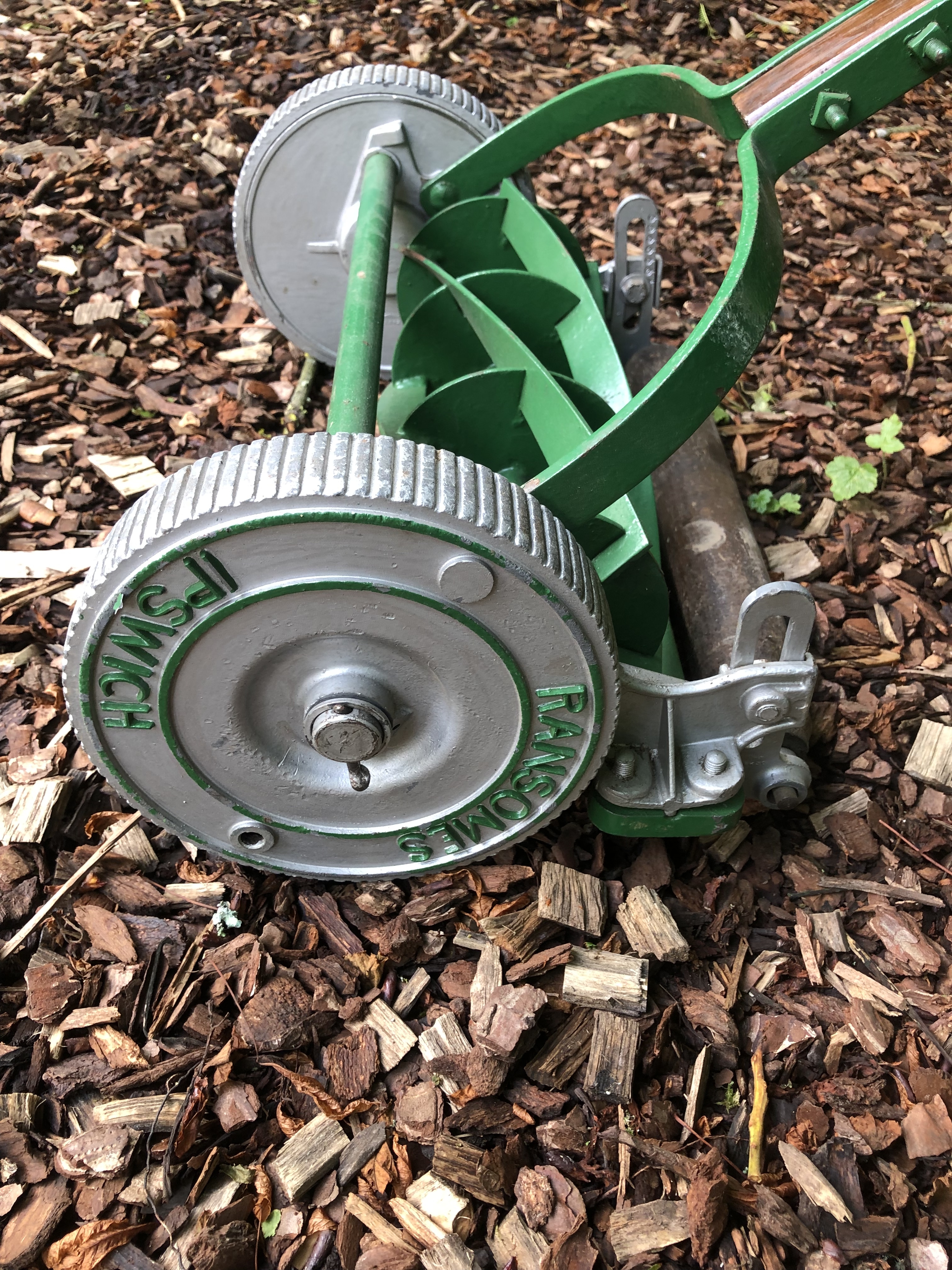 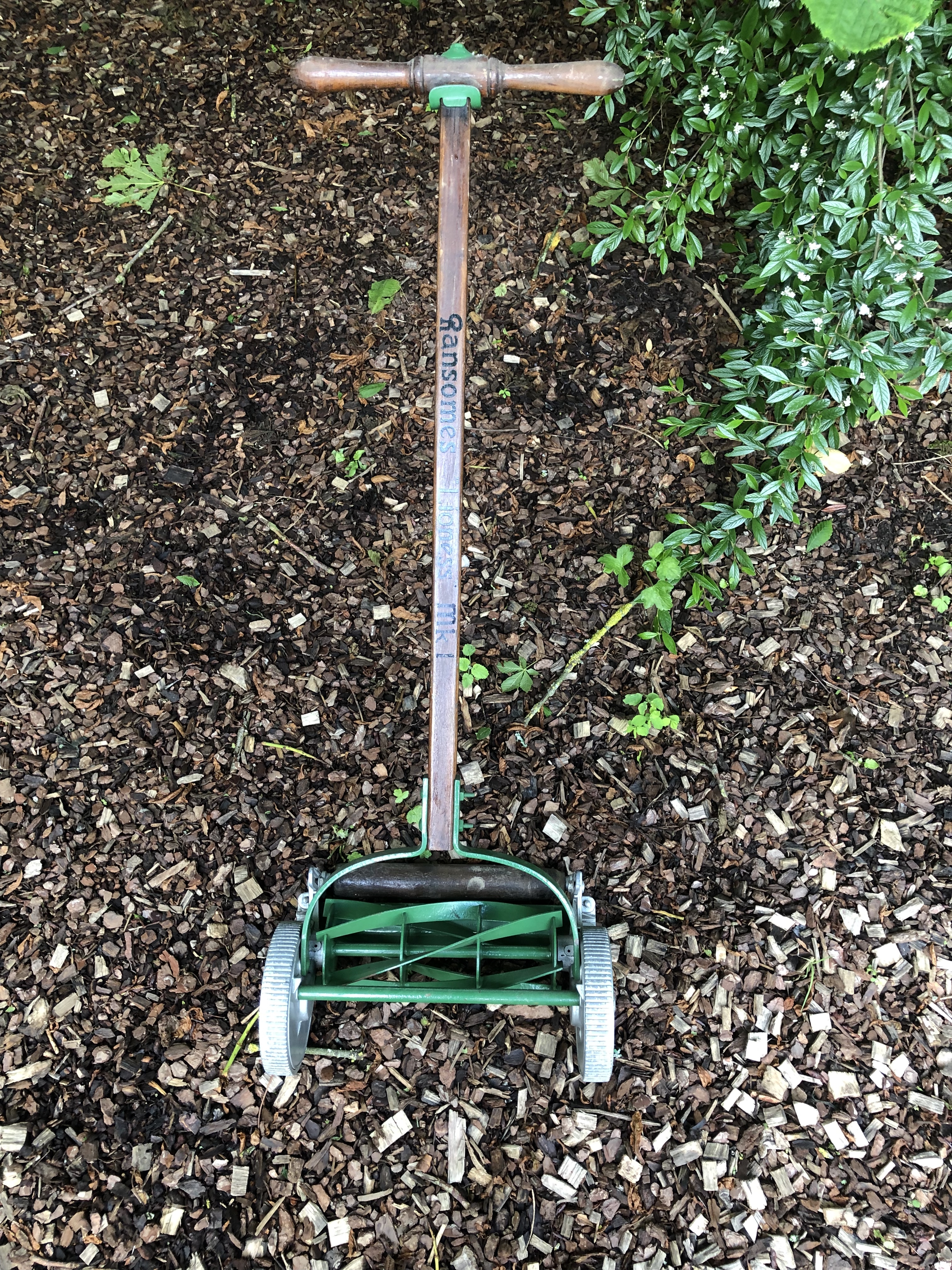 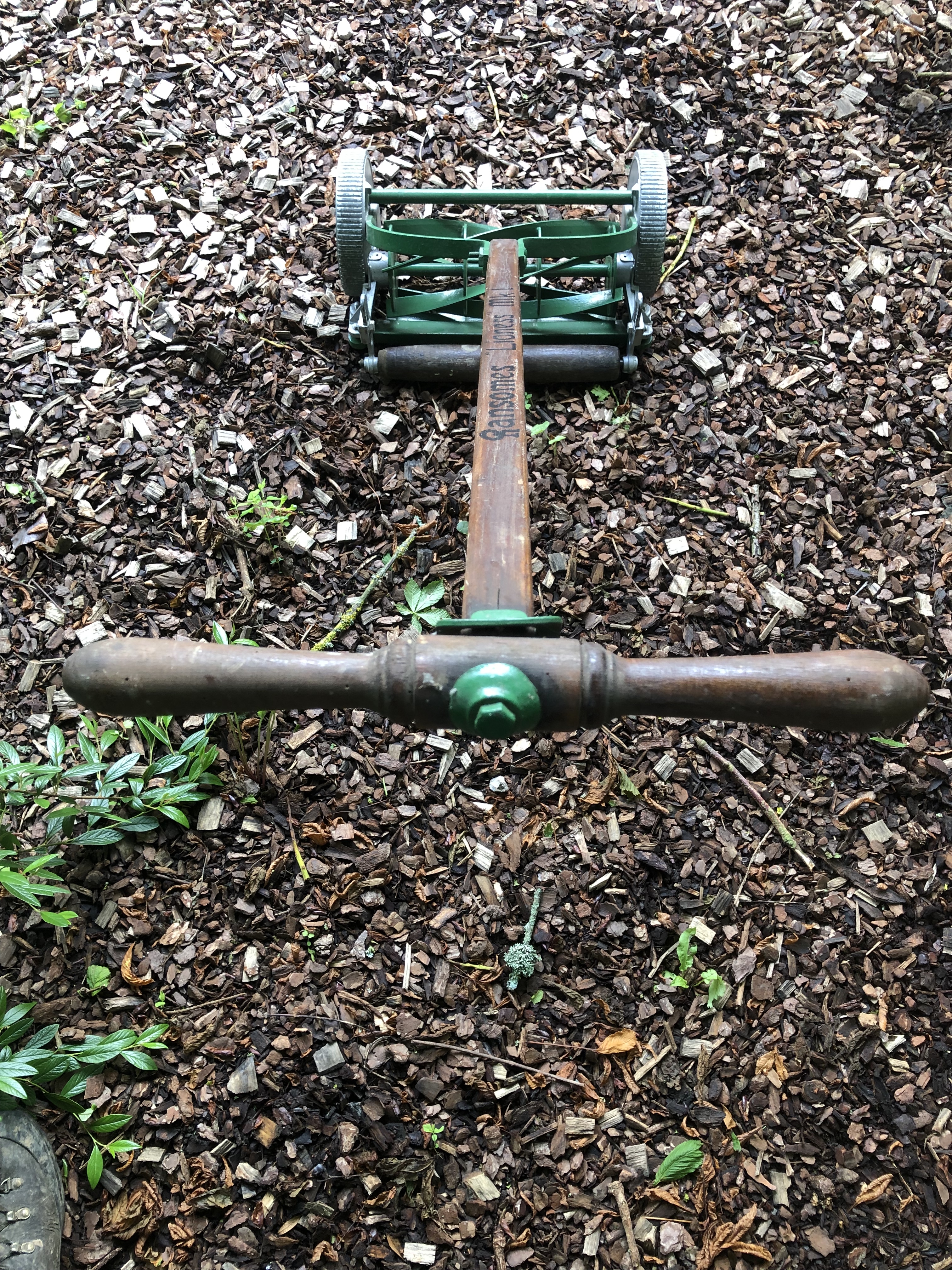 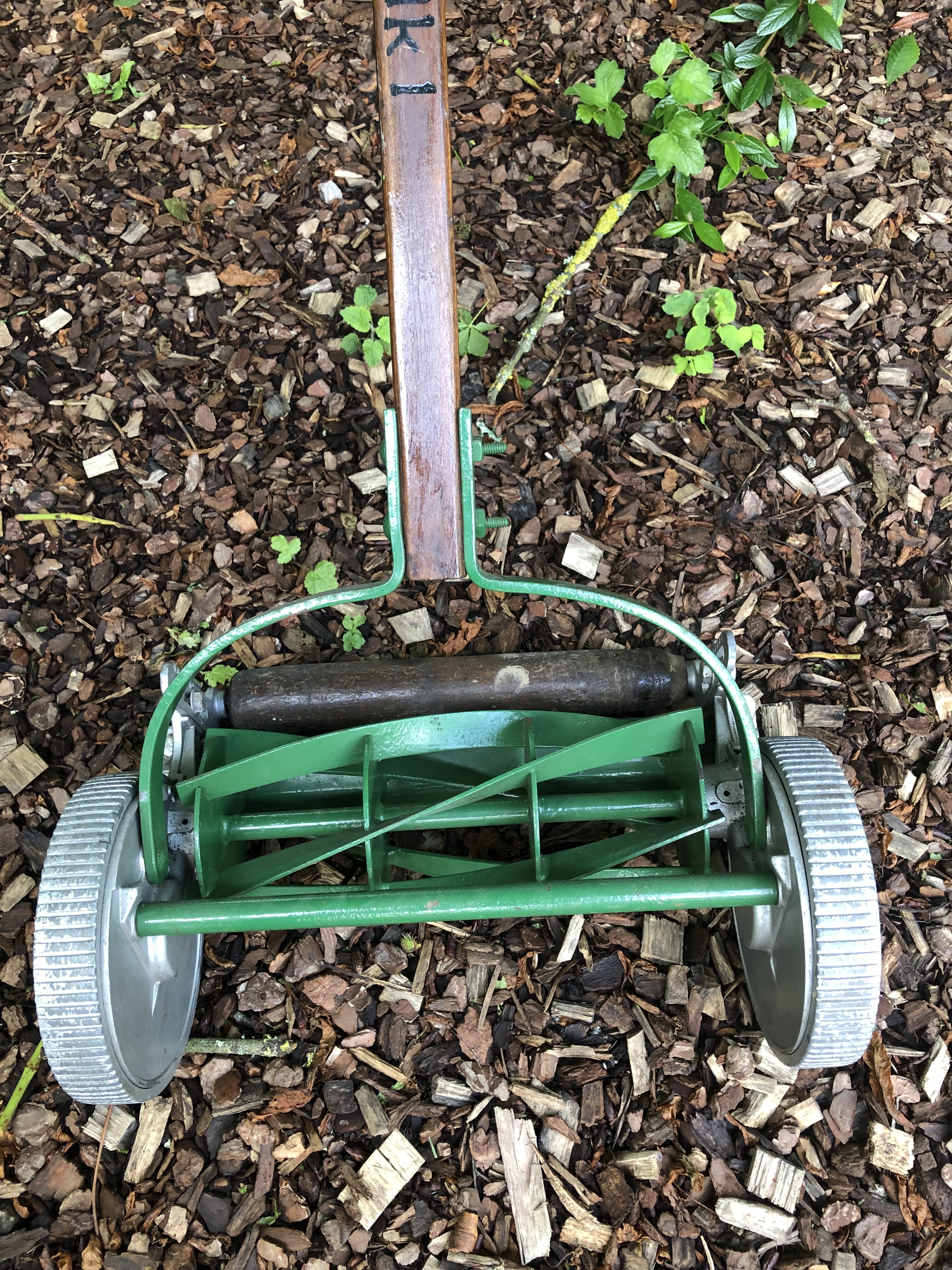 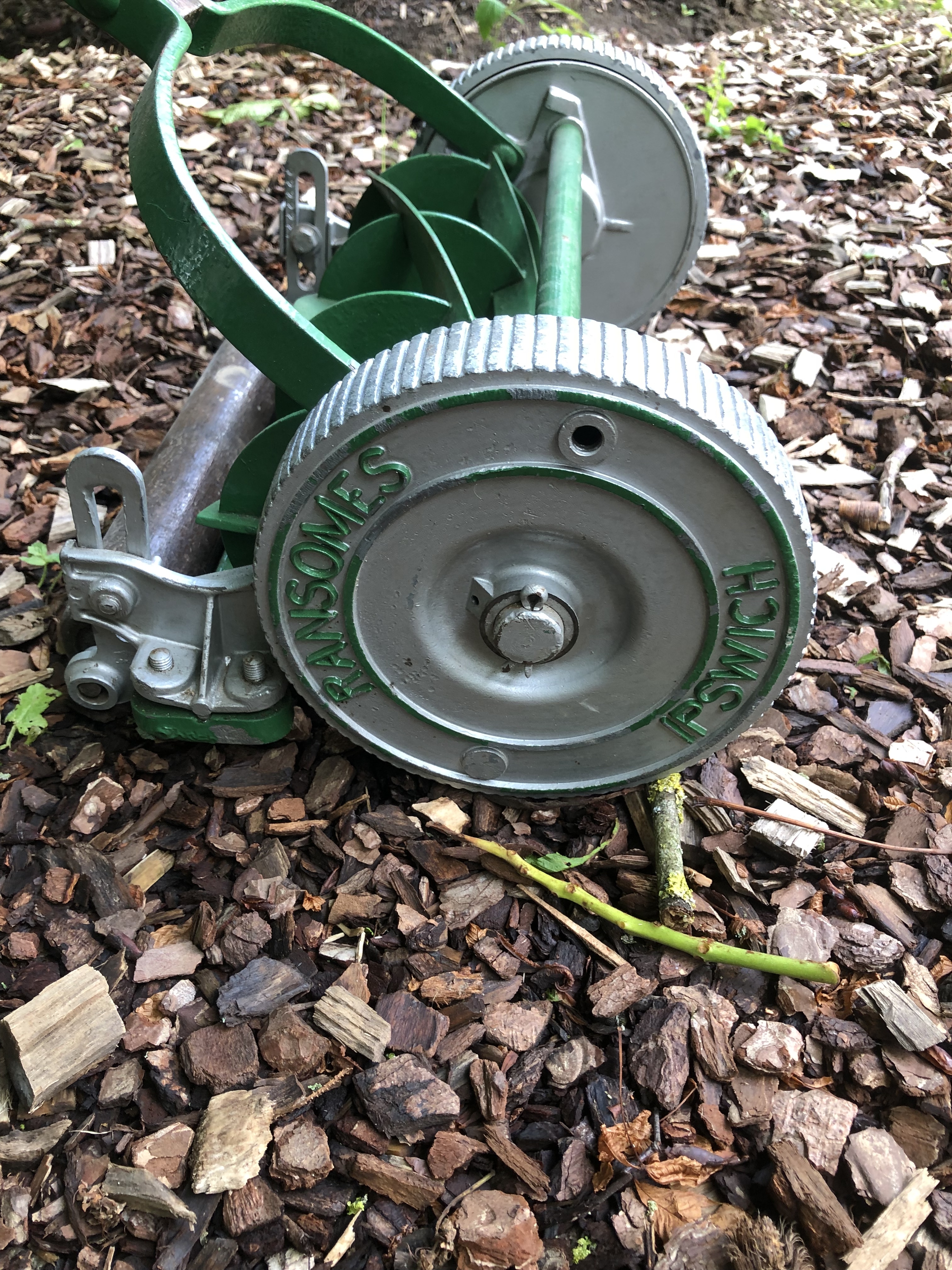 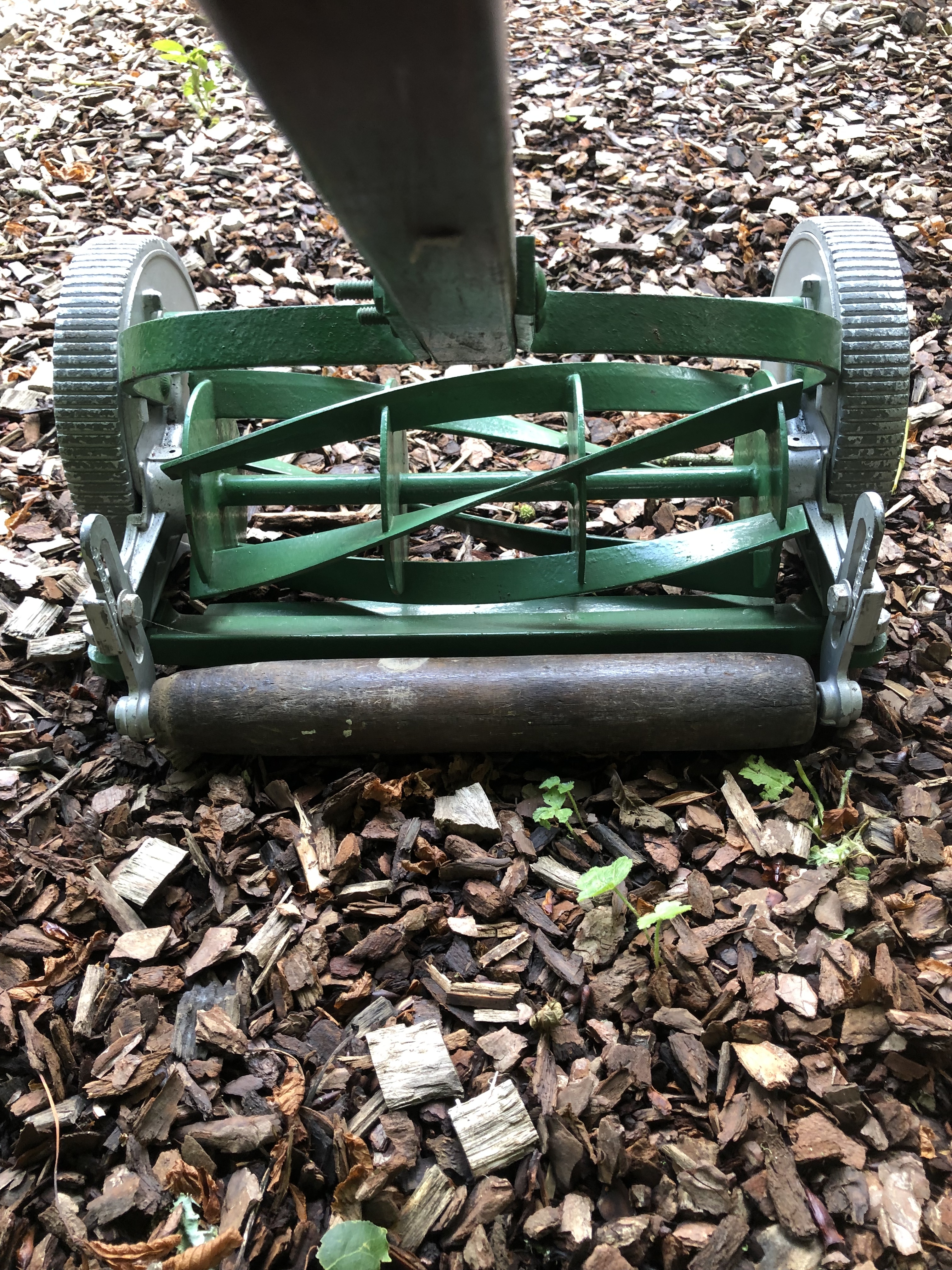 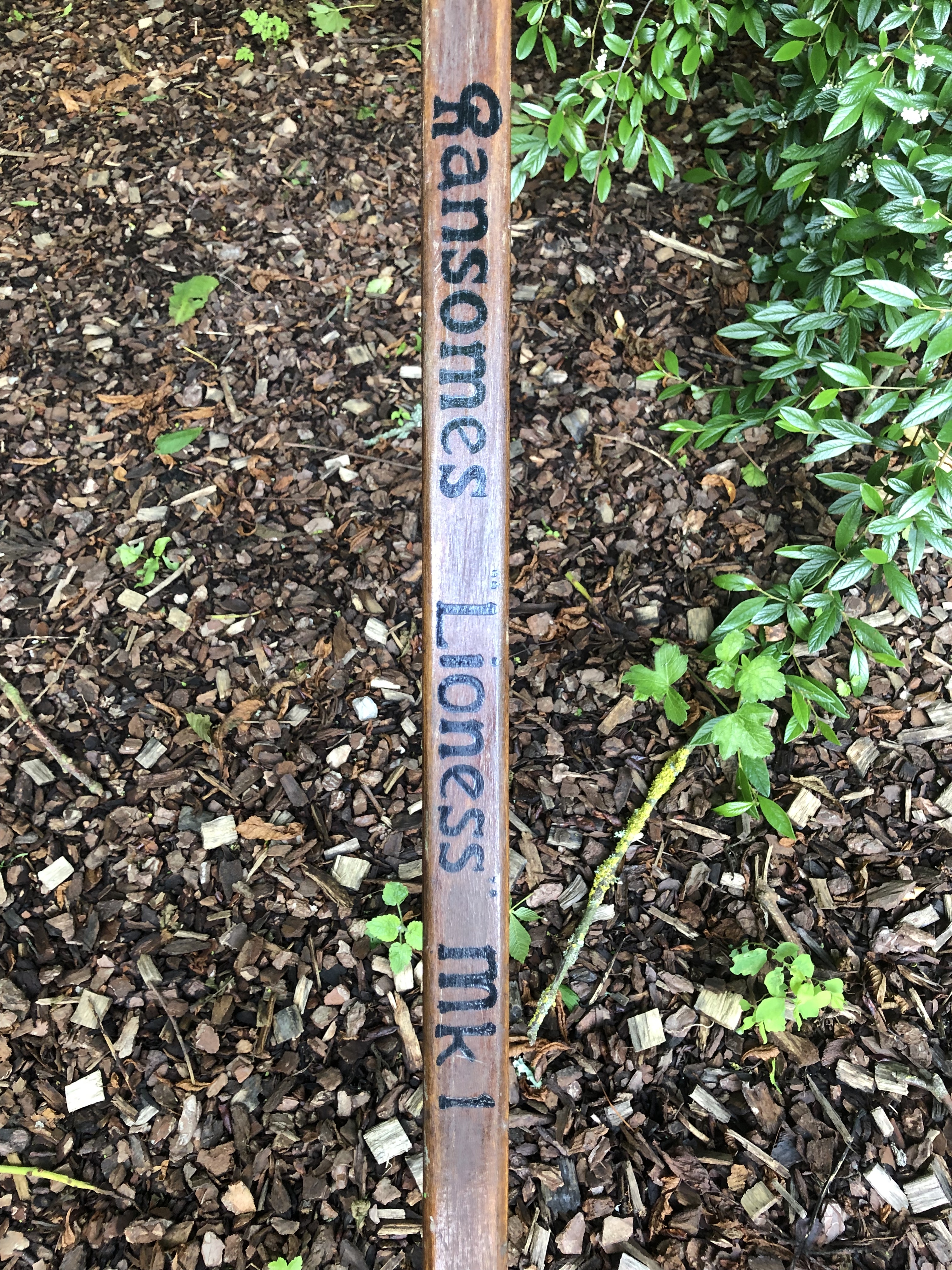 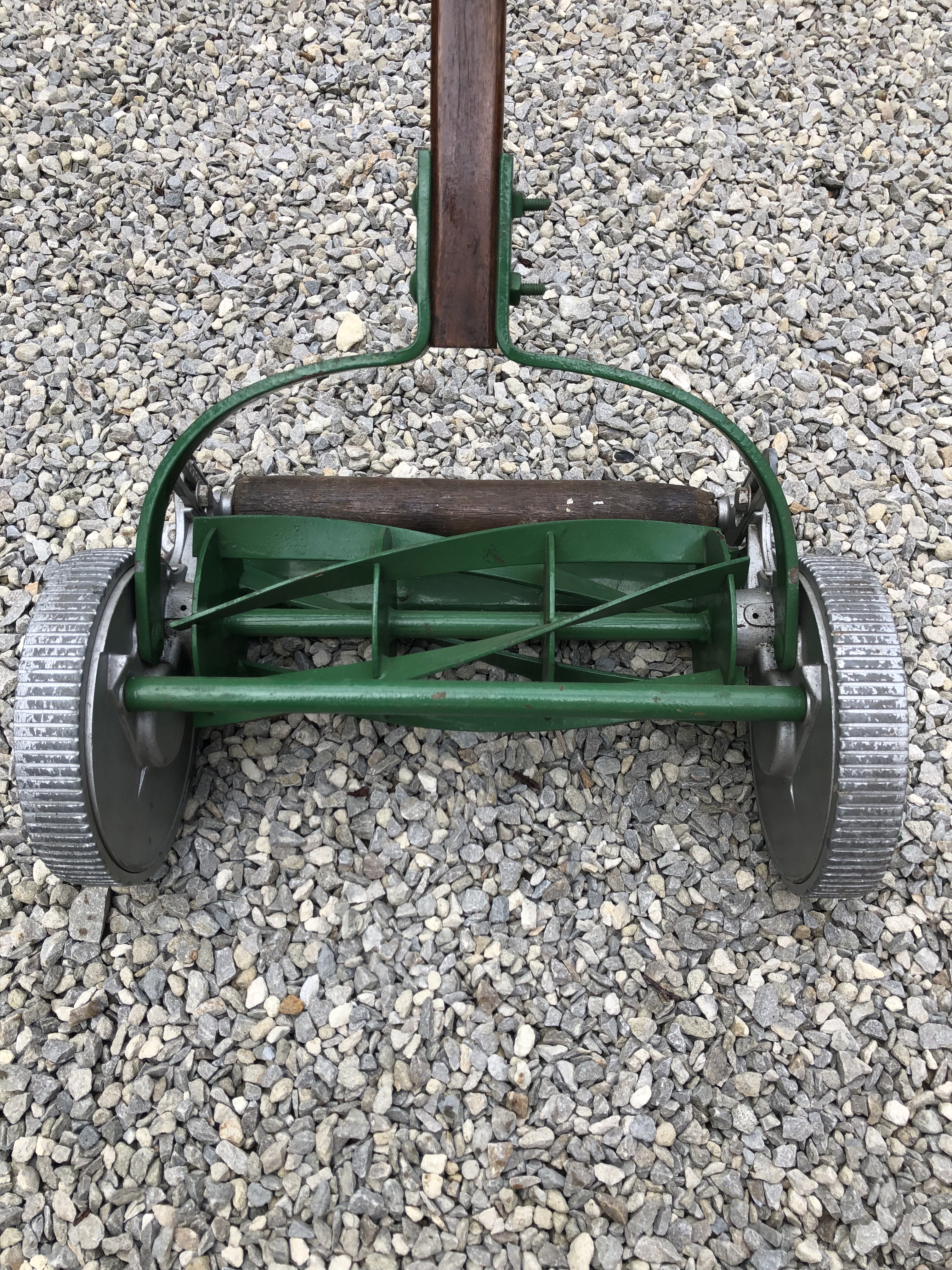 I can't help but notice that there has been an awful lot of activity / discussion about Ransomes Lions, Leo's and Cubs. There has been no reference whatsoever to Ransomes Lionesses. Whilst they don't have a pretty badge like the others are they not worthy of note ?

Yes they certainly are. It's

Yes they certainly are. It's not quite true to say that there has been no mention, a ' find ' and restoration got a brief mention and some photo's last year. I think the reason for it's low profile is lack of numbers rather than dis-interest. By the way it looks as though the split pin on your left hand wheel may be about to drop out !

Many thanks Colin for the

Many thanks Colin for the heads up on the split pin. Attention to detail was obviously lacking when I took the photo.

The wooden roller pins from

The handle is different when compared to other handles on the same mower but it is not the end of the world.

The Ransomes Lion, Cub and Leo will always be popular because the badges make for an attractive lawnmower, in fact any mower with a badge and while I hope to house both the Lion and the Cub in the distant future. I don't have any favourites in my collection but the Suffolk Viceroy MkII ( Not to be confused with the model two) and the Ransomes Lioness are used more because they much lighter and better suited for my lawn.

Hi John. I was interested to read your comments on the wooden roller pins. The wooden roller on my Leo is in the process of being replaced - see photos. New roller pins required as well ! A bit too much play where the pin fitted into the height adjuster on mine by the look of it, metal on metal ? Cheers. Rob 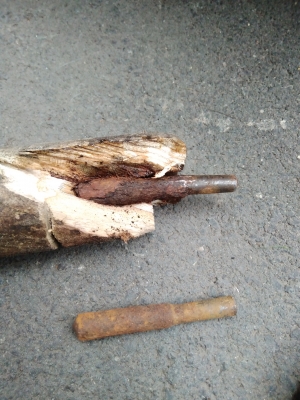 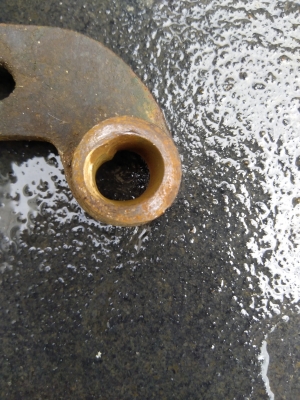 I do not think you have lost to wear very much on the pins, I believe the original idea behind the large diameter hole on the height adjuster was so that the pin could effectively clear dirt and grass cuttings thus preventing the roller as a whole from becoming seized due to its close proximity to the ground

The wooden roller takes only the singular pin at each end, there is no iron/copper sleeve inside the wooden roller,  There is clearly some rust decay from the inserted pin and possibly a nail?  "if present" may suggest - to wedge the pin in place at a time when the diameter of the wooden hole became too big for the pin for some reason or another.

Hi John. Thanks for the reply

Hi John. Thanks for the reply. Will post photos of the new roller and spindles when I have them. Cheers. Rob