As per title I have acquired a very early Suffolk Punch.  Apart from having a model 1A engine, other features that make it even earlier is the engine cowl which does not incorporate the stamping for the recoil starters - when the recoil came in as an option the stamping was changed and fitted to all engines regardless of rope or recoil start.  Also there appears to be no serial number on the mower, The side plate does not have "Serial No " cast in to it below where the serial number would normally be stamped, and I have yet to find its location if it is stamped anywhere at all.  Finally the engine number is 40435.  As I doubt that they would have made 40435 engines by the time this was made, so I suspect that they started from 40001 and this may be the 435th 75cc engine that they ever made. 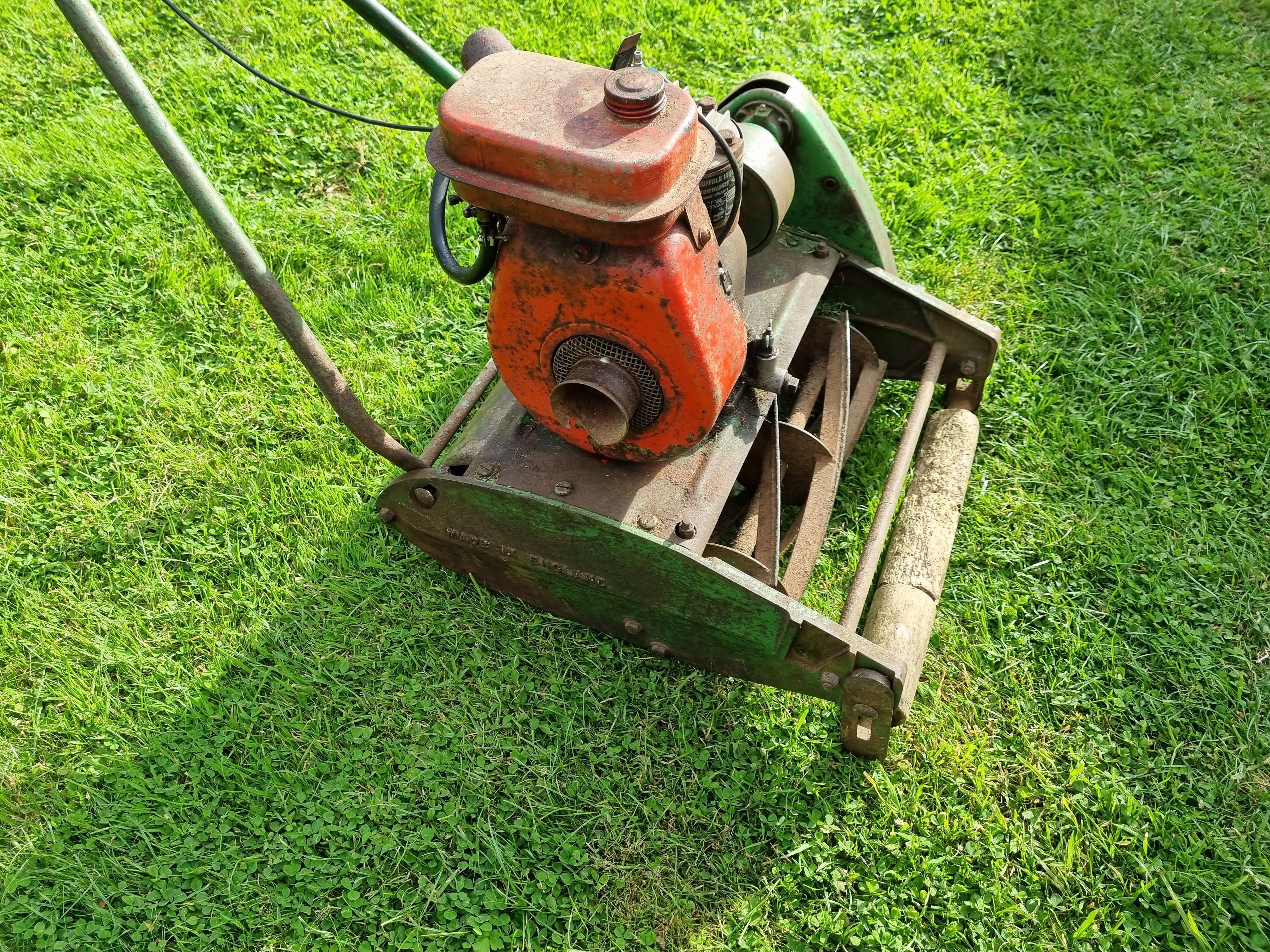 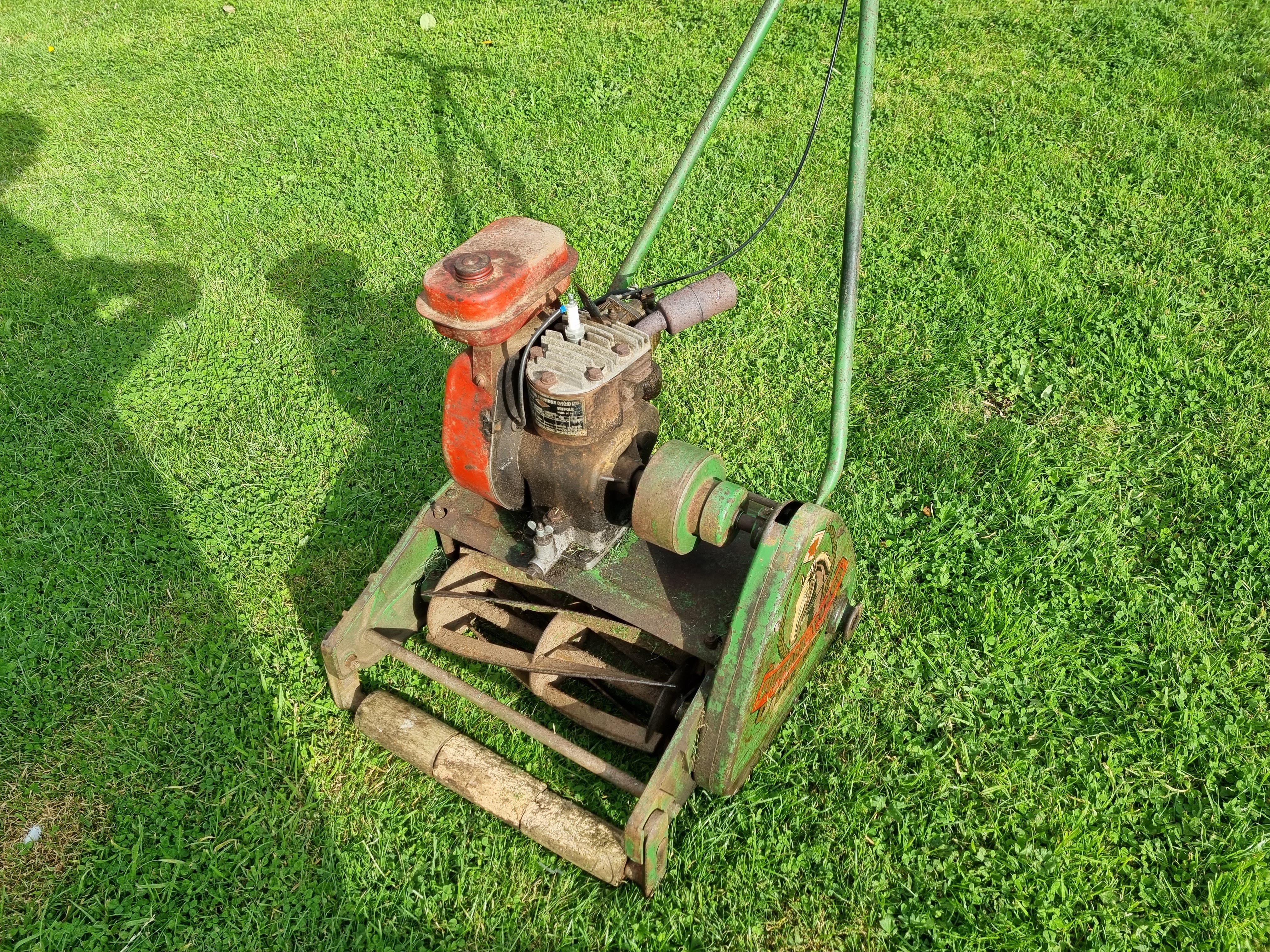 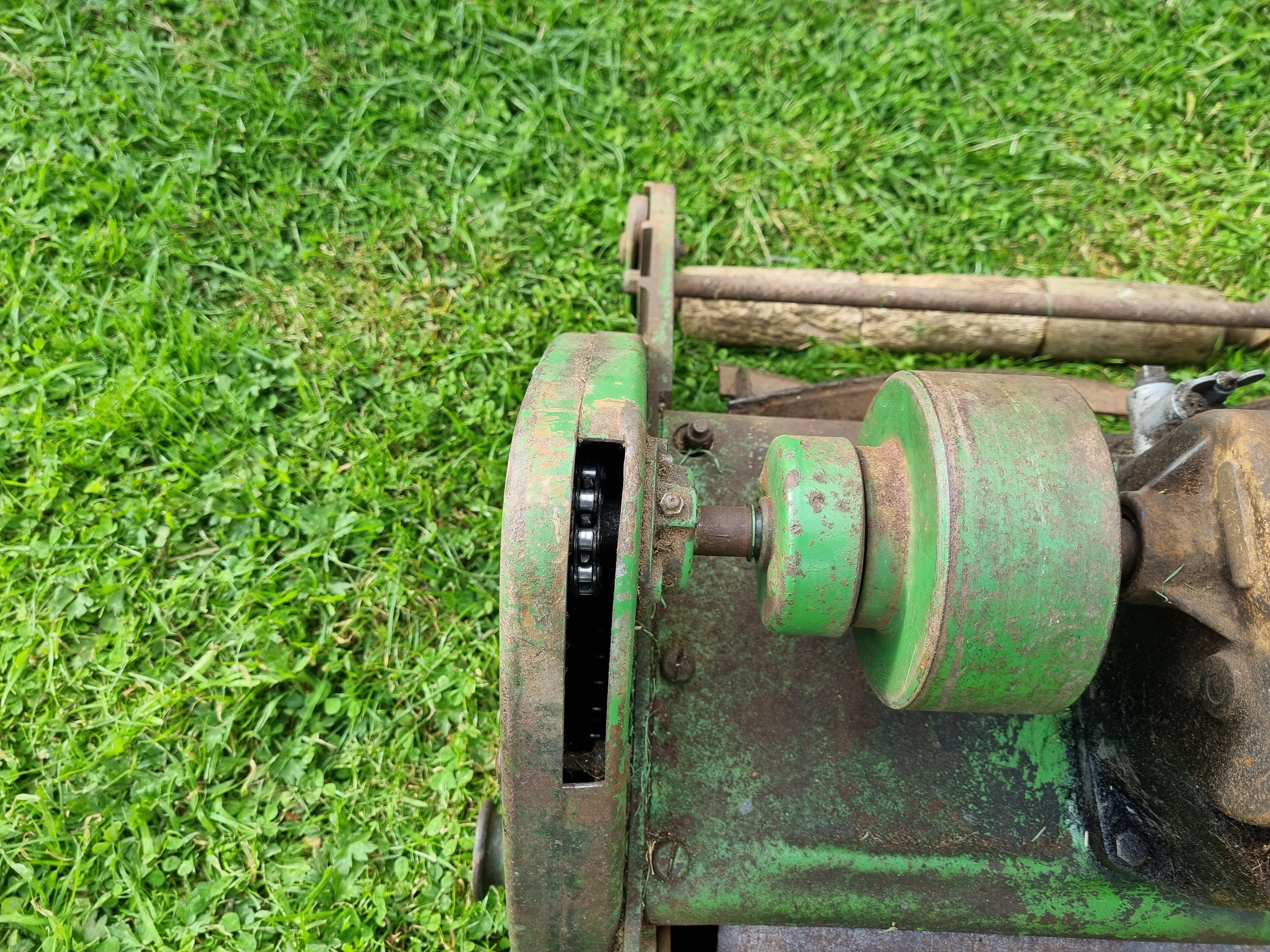 What else makes this machine remarkable is that it appears to be very original, it has the original silencer still which seems to be in good condition, even the fuel hose is rubber rather than a clear plastic replacement.  I was told it was regularly used until recently, and the general condition seems to be of an old but well maintained machine.  The oil level was correct, the adjustment of the blades was not far out, and the engine started, ran and idled beautifully - all the carb. settings seemed to be spot on.  It is unfortunate that someone seems to have cut a hole in the chain guard, but at least I could see at a glance that the chains were nice and shiny and without rust.  It has a really nice dipstick too.  I don't know if it is original, all Suffolks I have seen with the "dipstick" in sump have a split pin as the dipstick, but this one is a rather nice alloy wing nut screwed on to a rod with the levels clearly marked.  Perhaps an earlier version before they went to the cheaper split pin type, or maybe a previous owner decided they wanted something better and made it?

There is a small thought lodged in the bottom of my mind that I may just have bought the oldest Suffolk Punch there is, unless someone knows different?

What a great find and indeed

As we have often said before for future reference it would be great if a member looked at compiling a log/data base of all Punches gathering information from members who have the machines.

Undoubtedly you have a nice

Undoubtedly you have a nice old machine but not "very" old. The fact that your's has a dog clutch to disengage the rear roller makes it a Series 111 (3) from around 1957. The Series 1, 1a &2 dating from 1956 had a freewheel sprocket for the rear roller - no dog clutch.

Engine. The early engines - designated 1a, 1b, 1d, 1g, 1h, and 3a , fitted to the Punches did not have a dip stick of any sort . They had an un-drilled vertical plug - the same part number as the horizontal drain plug. Their exhaust silencer screwed into the cylinder block via a female/male 90 degree pipe fitting , not directly into the block. You may note that the engine designation 1c is missing from the above list; that was known as the Auto Swift Engine, 75G14-1C and had some different design features including a different design of carburettor from that found on other Punches. As far as I know the recoil starter was never an "option" on the Punches - just a running change that appeared on the 1g and 1h .

So you have a nice old machine but not the oldest in captivity; a Series 1 with all the original features resides in my shed!

It would be interesting to know the reason for  the fairly neat cut out in the chain case; seems a bit excessive to oil the chains without removing the cover.

Great information Wristpin & a bit more knowledge gained, up to now just assumed the early ones had the square tank & rope start, had a closer look at the parts diagrams & can now see the other differences you mention, thanks.

Thanks for that, my engine is

Thanks for that, my engine is a model 1A, and it could be that originally it had no dipstick - It is entirely possible that someone drilled out the plug and made a dipstick of their own, unless someone else has seen one like it?

The manual on this site dated January 1956 has amendments added for the rear drive dog clutch, so as you say I guess that puts my machine after this date. I am curious about the 90 degree pipe fitting in the exhaust, this is not shown in any of the photos of the Series 1 shown in the manual, which I would expect to be a pre-production model as otherwise there would be no manual to go with the first model sold, and this has the same exhaust as mine and the others of the era I have seen.

However a straight through Briggs and Stratton exhaust (upon which the curved Suffolk was based, in fact the whole engine was almost an exact copy of the Briggs model 5S, to the extent that most parts are interchangeable if not completely identical) and 90 degree pipe fitting would fit, and indeed those parts are still available brand new off the shelf today -  I even used one with a 45 degree fitting to try and replicate as closely as possible the exhaust that would have been fitted to my 7A engine fitted to my Commodore.

I don't think I will ever know why the gear case was cut, close inspection seems to show that it was done by hand with a hacksaw It is my intention to weld it back up and grind smooth so from the outside at least it will not be noticeable. Then a good clean, some new rollers, a coat of paint and new decals and hopefully it will look great!

It always makes me smile about Suffolk proclaiming you have "full command of the machine" with just the throttle - even with practice and a slow idle I don't always judge exactly the right moment to shut the throttle to avoid getting dragged towards the flowerbeds - it takes a while for the engine with that large flywheel to slow down and disengage drive!

Re the exhaust, in a spares

Re the exhaust, in a spares manual I have that covers all the Suffolks, printed I thionk mid-late 60's? a diagram covering models 1A,1B,1D,1G,1H & 3A does show the elbow bracket, but in the key to part numbers it states 'Now Obselete'.

Appreciate this doesn't tell us when the change was made.

Interestingly my parts book shows the bend with no reference to it being obsolete. That could just be their way of saying that it was no longer available as a Suffolk part,  but it’s only a proprietary malleable iron pipe fitting available from a decent plumber’s merchant.

It is quite handy the exhaust

It is quite handy the exhaust being threaded 1/2 inch BSP!

An update - was mowing my

An update - was mowing my lawn tonight (well probably last night by the time this post appears) with the Suffolk and discovered that in addition to the dog clutch on the roller, it also has a freewheel.  Even with the dog engaged, I can push it forwards as far as I want without the blades rotating. Up until now I had always disengaged the dog clutch when I moved it so had not noticed it before. Was this a factory fit or could a dog clutch have been retrofitted to an earlier freewheeling model?  Pretty sure later ones I have seen were dog clutch only.

How strange. To add a dog

How strange. To add a dog clutch would, I’d think,  require changing the rear roller as well, to get the extended shaft to mount it on.  A browse of the parts book is required,  and possibly an expedition to the storage shed.

Do you have the engine number

I will have to take a look. 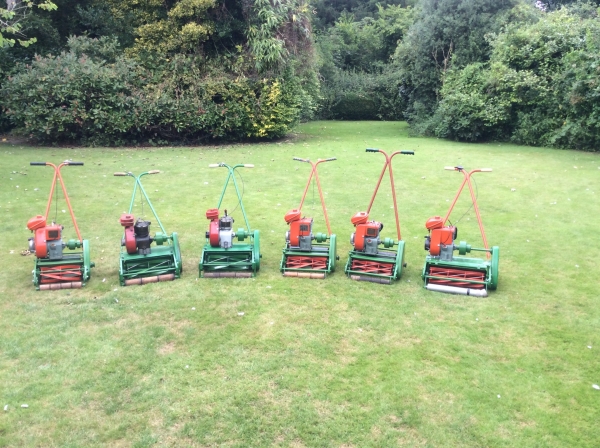 I will have to take a look. The issue being that all my Suffolk’s are up on racking with some fairly heavy stuff under and in front of them - and they are wrapped up!

Second from the left in this line up - no dog clutch.

That's a lovely line up!  I

That's a lovely line up!  I wonder when they stopped painting the engines black? I notice that third from the left has what would appear to be the silver finish, so I guess mine predates that.  I have a Commodore with an early silver painted engine, thought it might have been painted silver just for Qualcast or did all Suffolk engines at the time get painted silver?

The “silver” engine looked to

The “silver” engine looked to be original so I left it that way. Same with the green cylinders and handle bars. I make no claims about the orange/red engine colour or the chassis green being strictly accurate but they were both colours that were readily available from Central Spares in aerosols , Westwood Orange and John Deere Green.   As is the way of things Central / Spaldings have rationalised their range and neither are still available. Unfortunately they have done the same with their Ransomes Green which is no longer correct shade for machines from the 6os to 90s but is the more vivid tint currently used.

My  little collection plus a Pony and a Commodore represents of what was around when I got involved in the mower business in the 1970s and are all working examples, preserved and not necessarily 100% “ correctly restored” - no stainless fixings and polished brass !