Unfortunately it's been stored behind the cat tree and as a consequence I found it very hairy when I got it out earlier, I'm reluctant to give it too much of a clean less I damage anything and so I'm sorry for the state of it.

But first the mower.... I know nothing about it other than the sticker which reads "Lloyds & Co LTD, Letchworth, England".  It seems this company is still around to some extent, and make mowers for cricket pitches and bowls clubs.  This would make sense given what this particular mower would be used for. 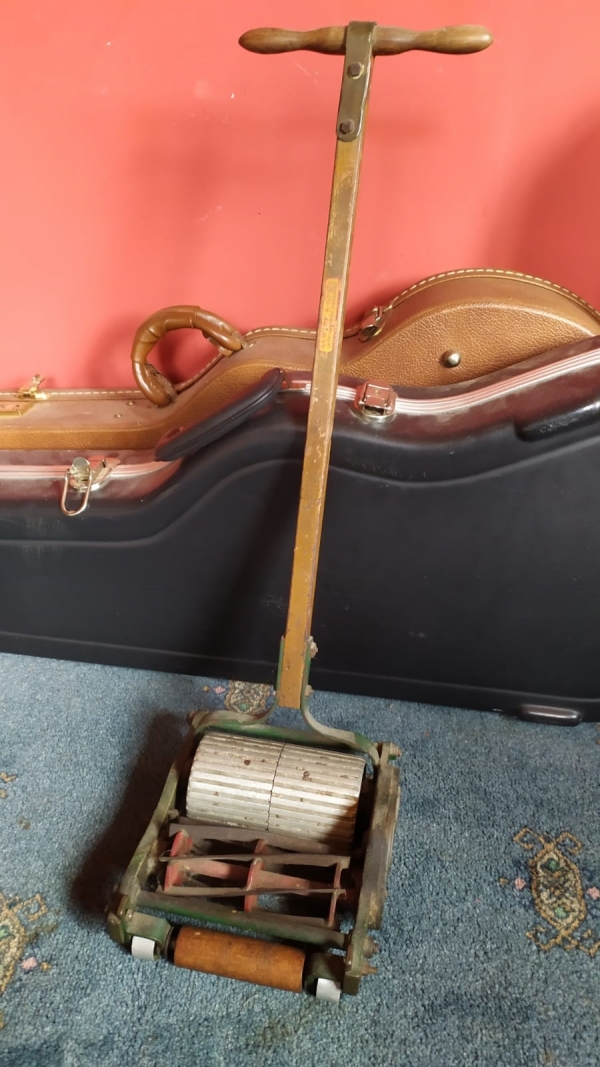 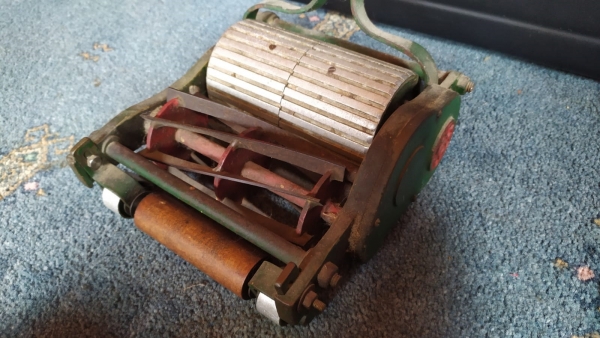 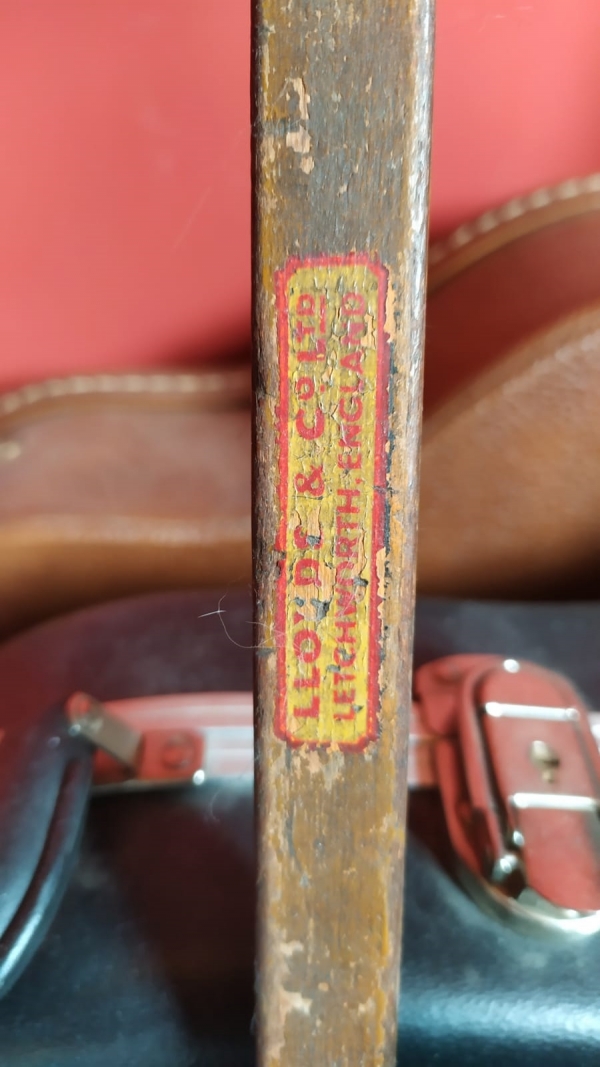 In inherited this mower, indirectly (there were some other generations) from my Great Grandfather, who was a gardener for Roland Callingham when he decided to build Bekonscot Model Village.  Consequently, my Great-Grandfather was involved with much of the landscaping and construction.  I'm sure some of you are familiar with Bekonscot, so I attach a photograph of this mower being used by my Great Grandfather to keep the lawns neat and tidy.  This would have been it's primary job, though I'm sure a larger one would have been used for the wider areas.... Indeed I did have a second hand push mower but it was too large for the indoors and it rotted into nothing some years ago (Though I might add that no-one ever made any associatio between this second one and Bekonscot).  In any case it was not nearly as handsome.

The Photograph may be from as late as the 1950's, I am unsure as I do not know the date of the mower.  Perhaps someone here would know? 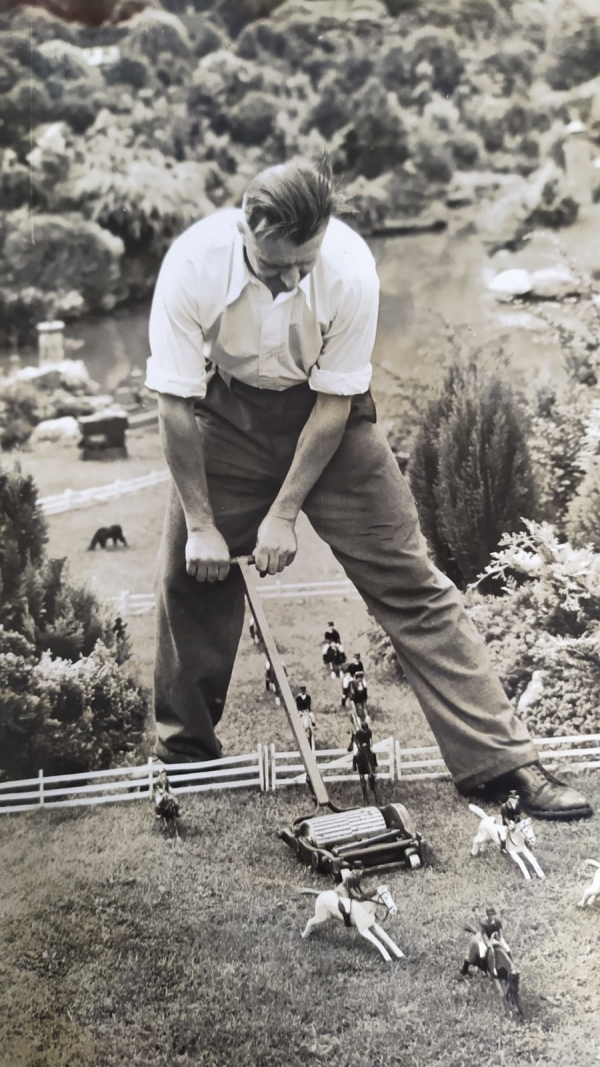 Anyway, it's been sitting around for many years now and has always been a curiosity to me.  I always liked the colours as a child and the fact it seemed almost to be a miniature model of a mower rather than an actual piece of practical equipment.  However there are a number of photos of it in action that I've seen so I have no doubt it was very much a well utilised tool over many of the early years of Bekonscot.  Thus I thought it may be of some novelty interest amongst this group.

Any advice on how to safely clean it and tidy it up would be much appreciated, and then I would find a nice safe place for it to live for many more decades. 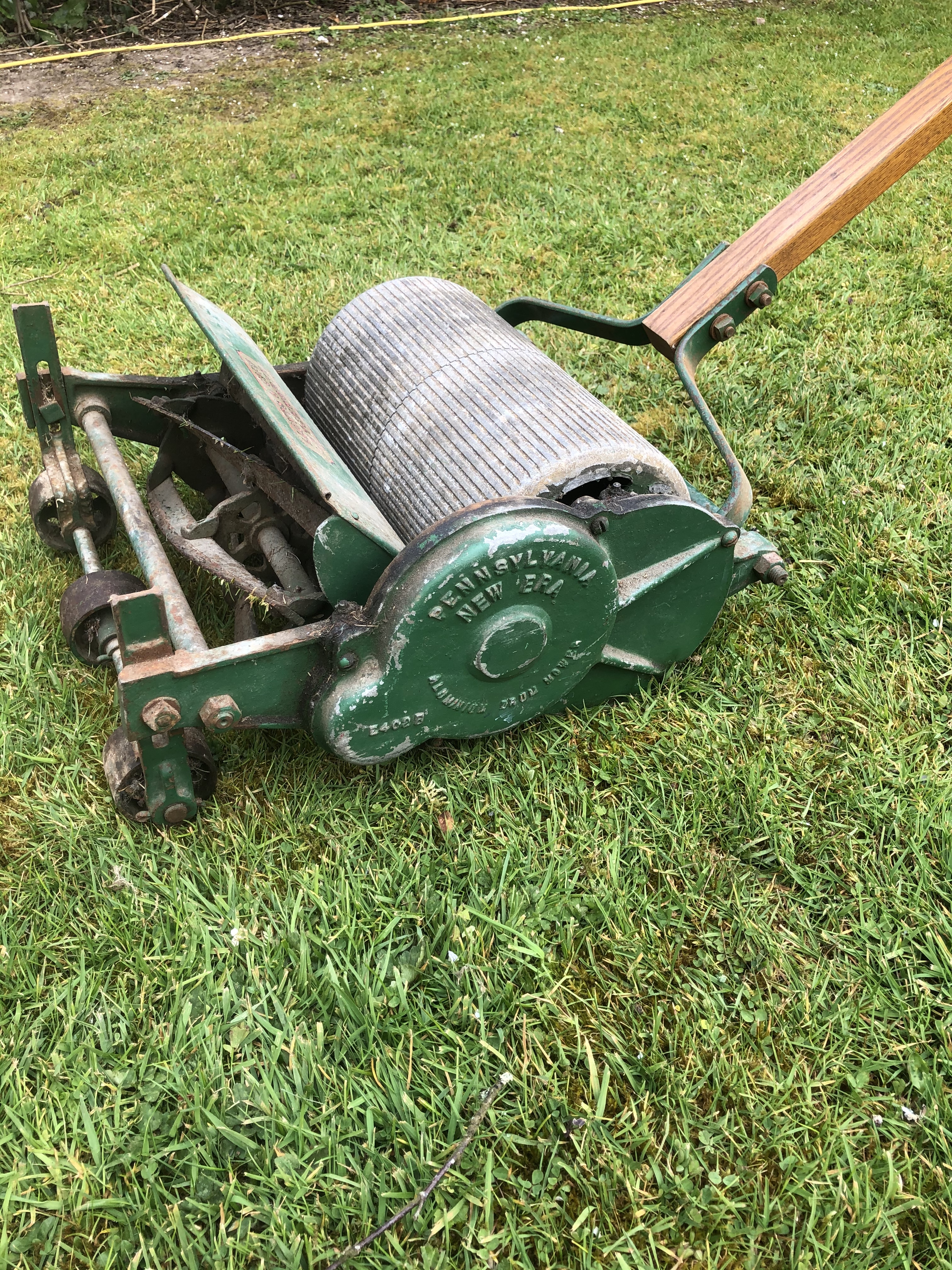 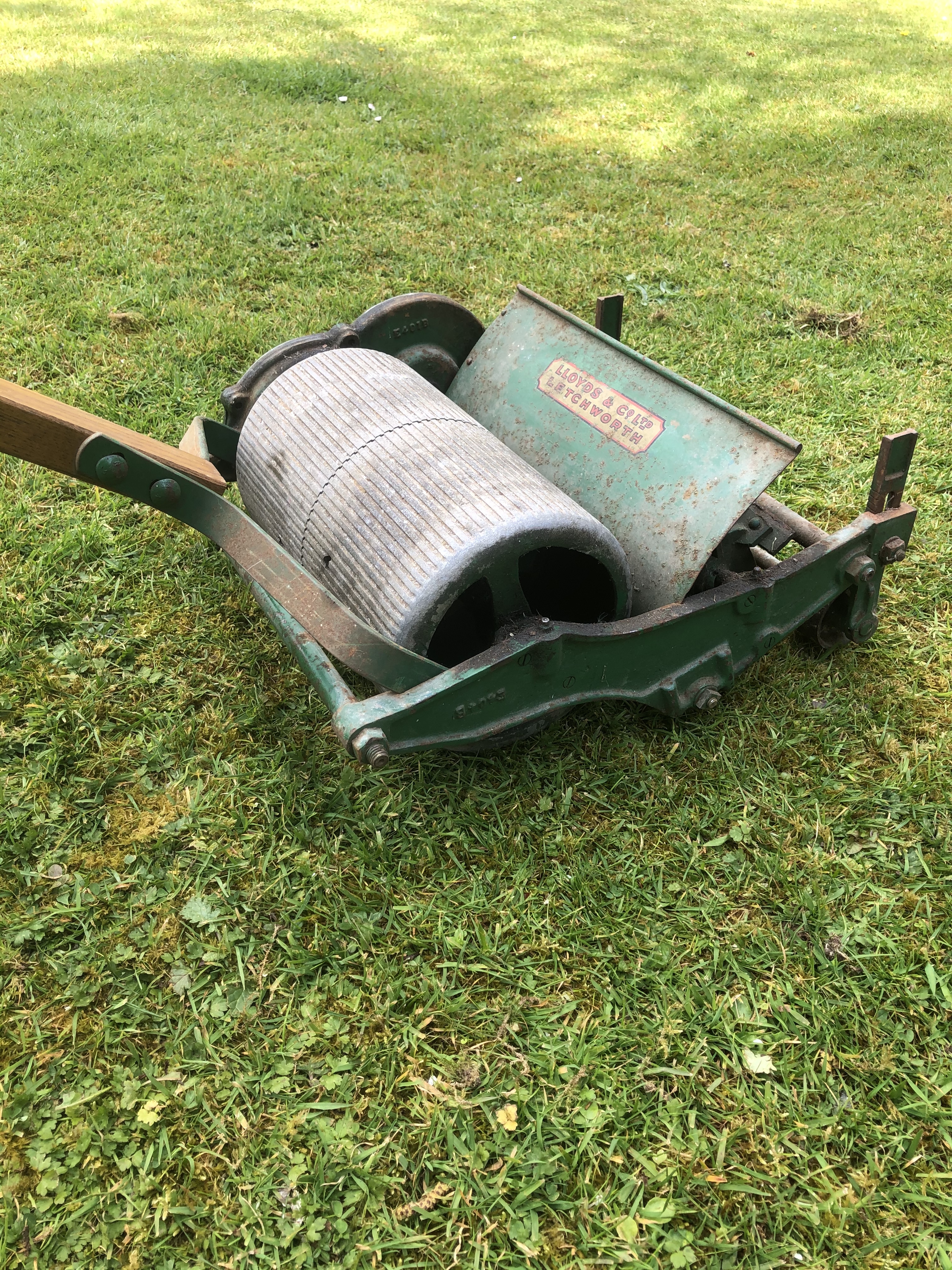 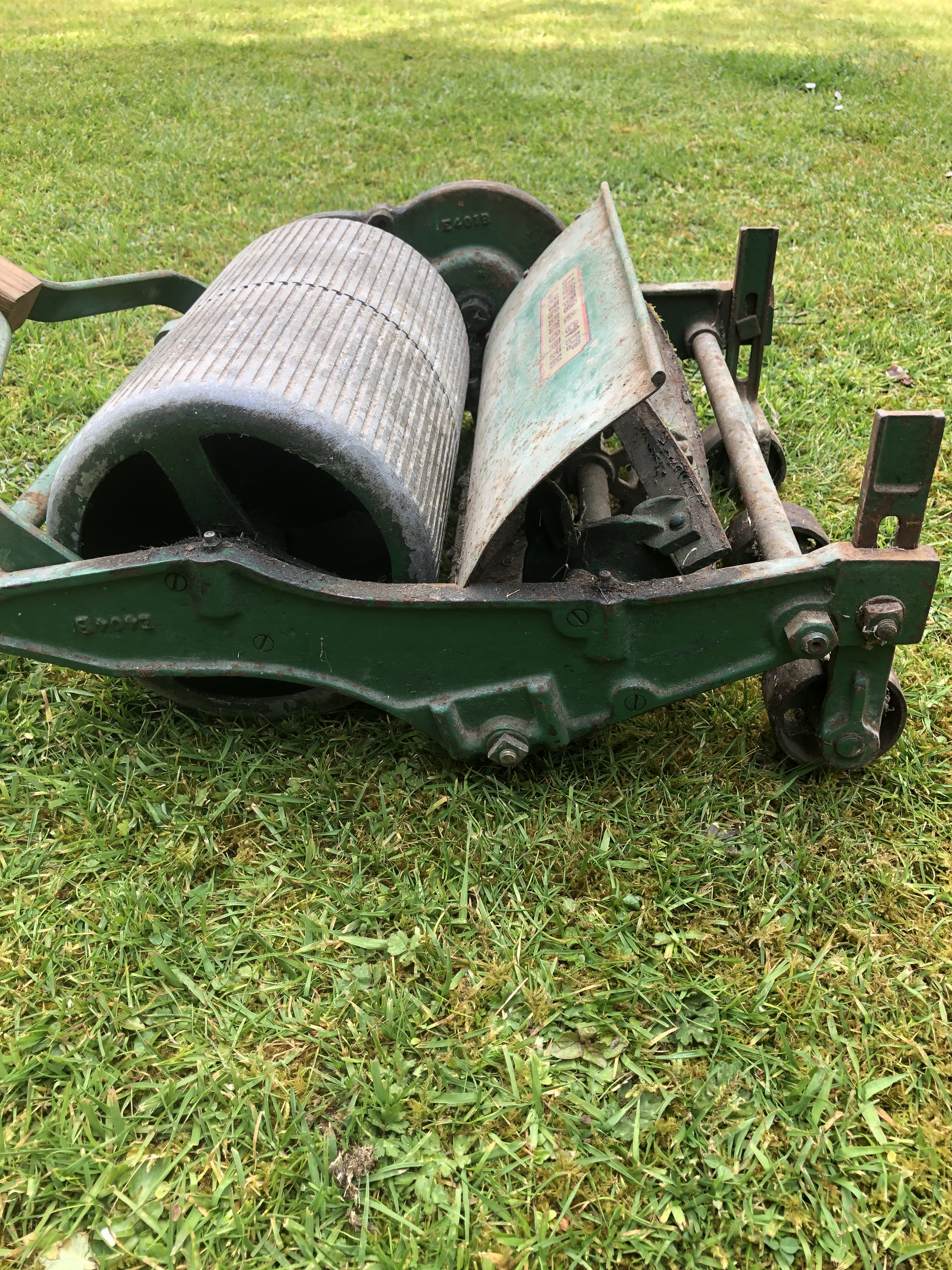 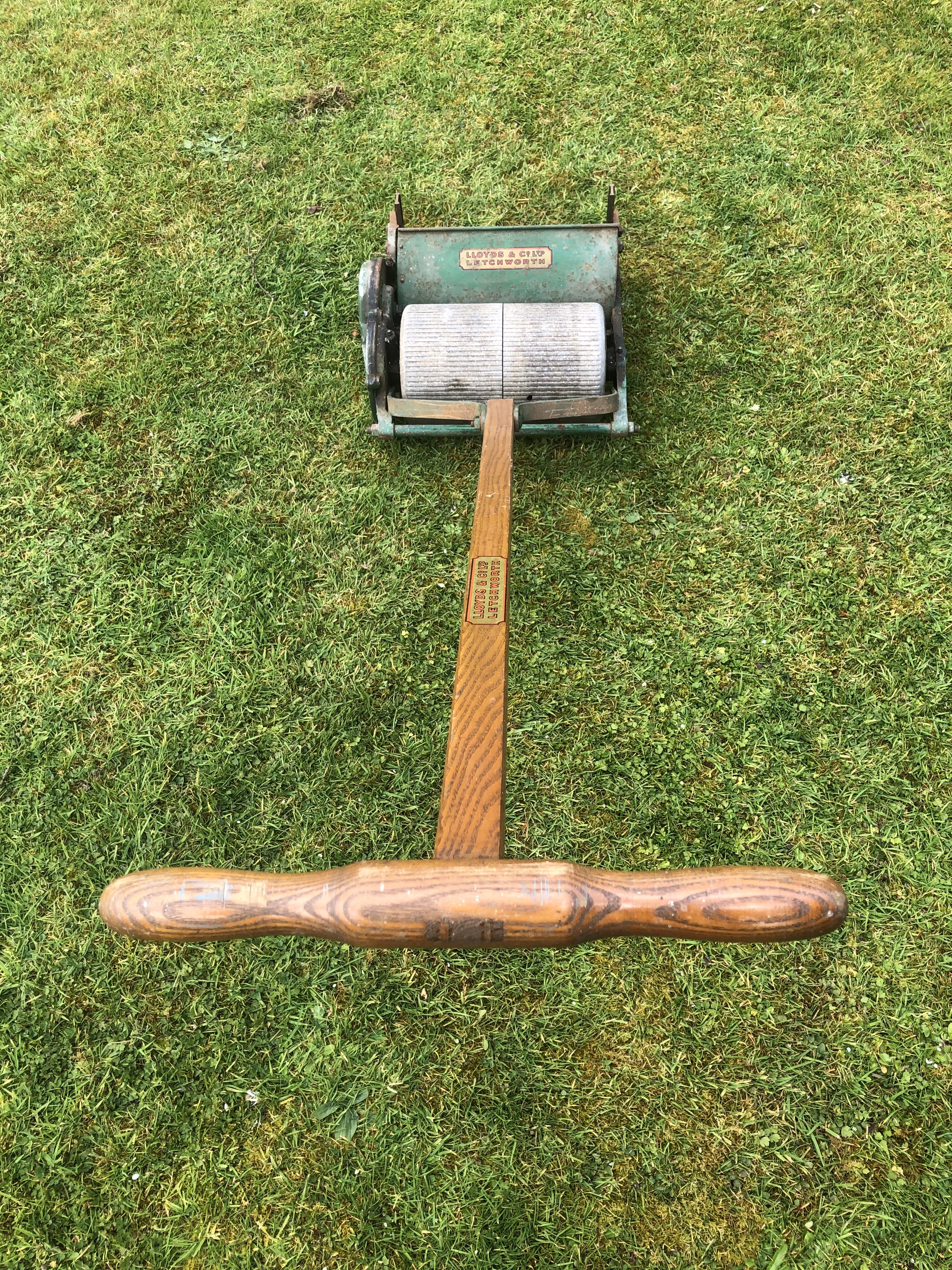 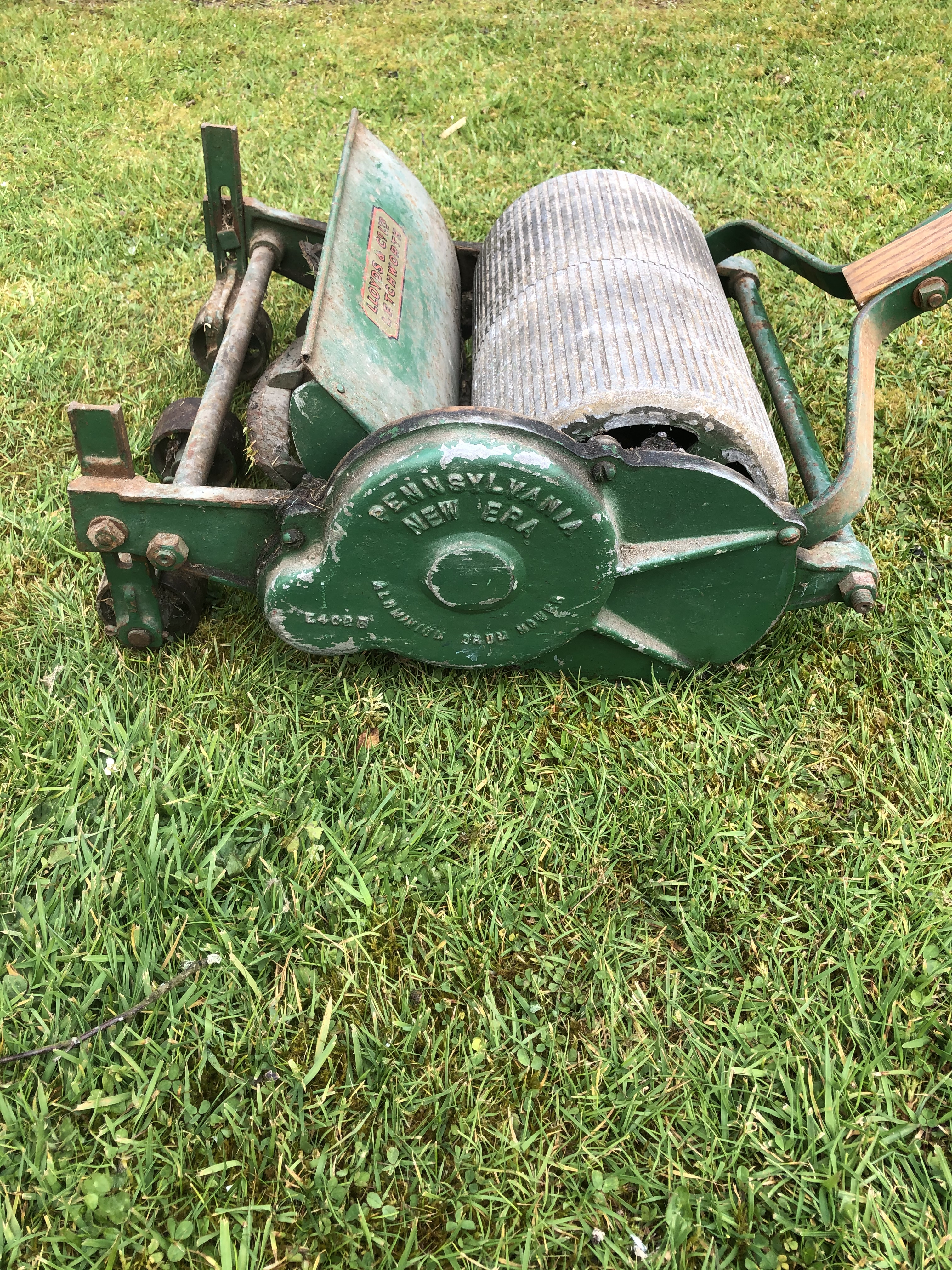 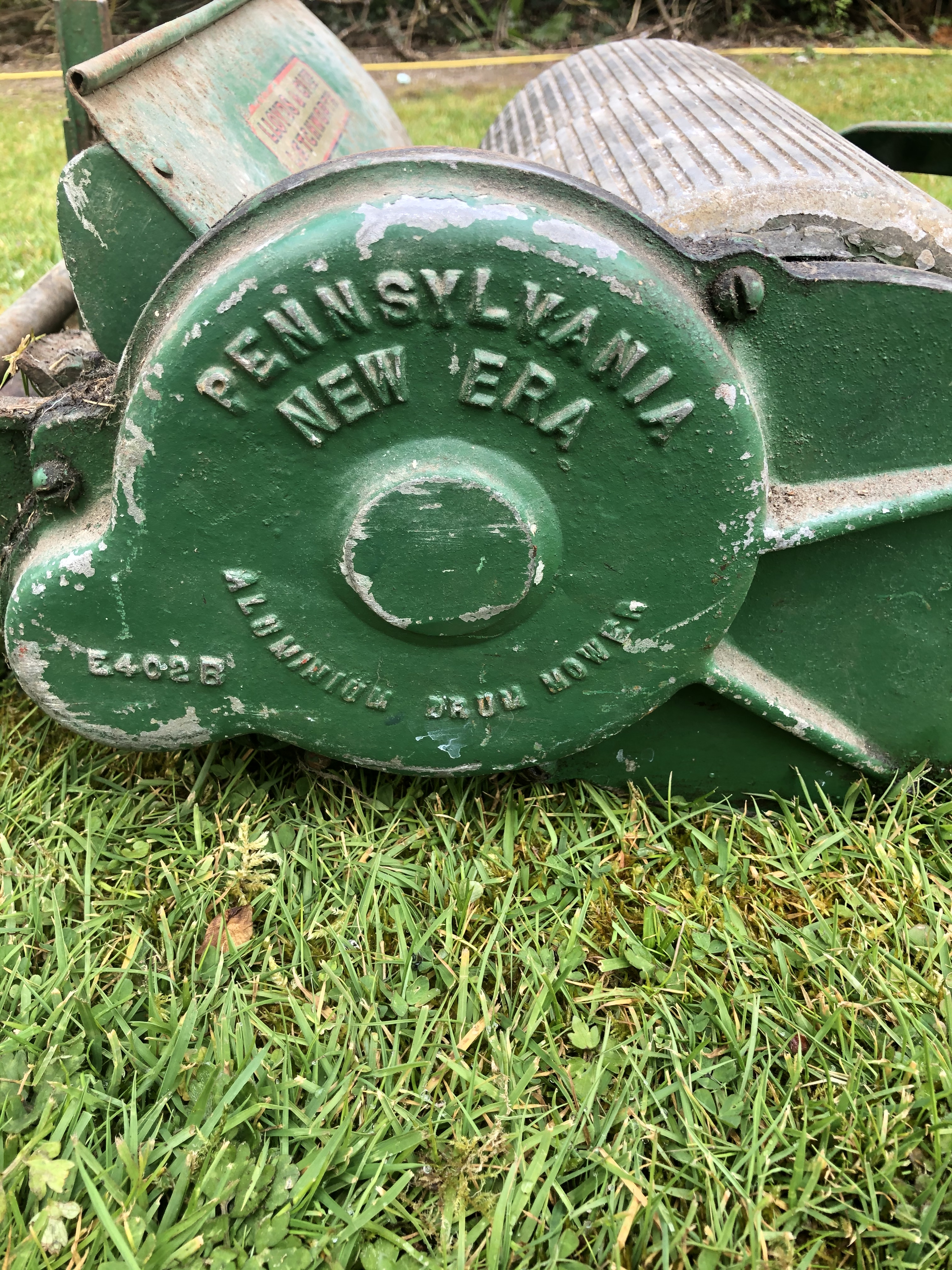 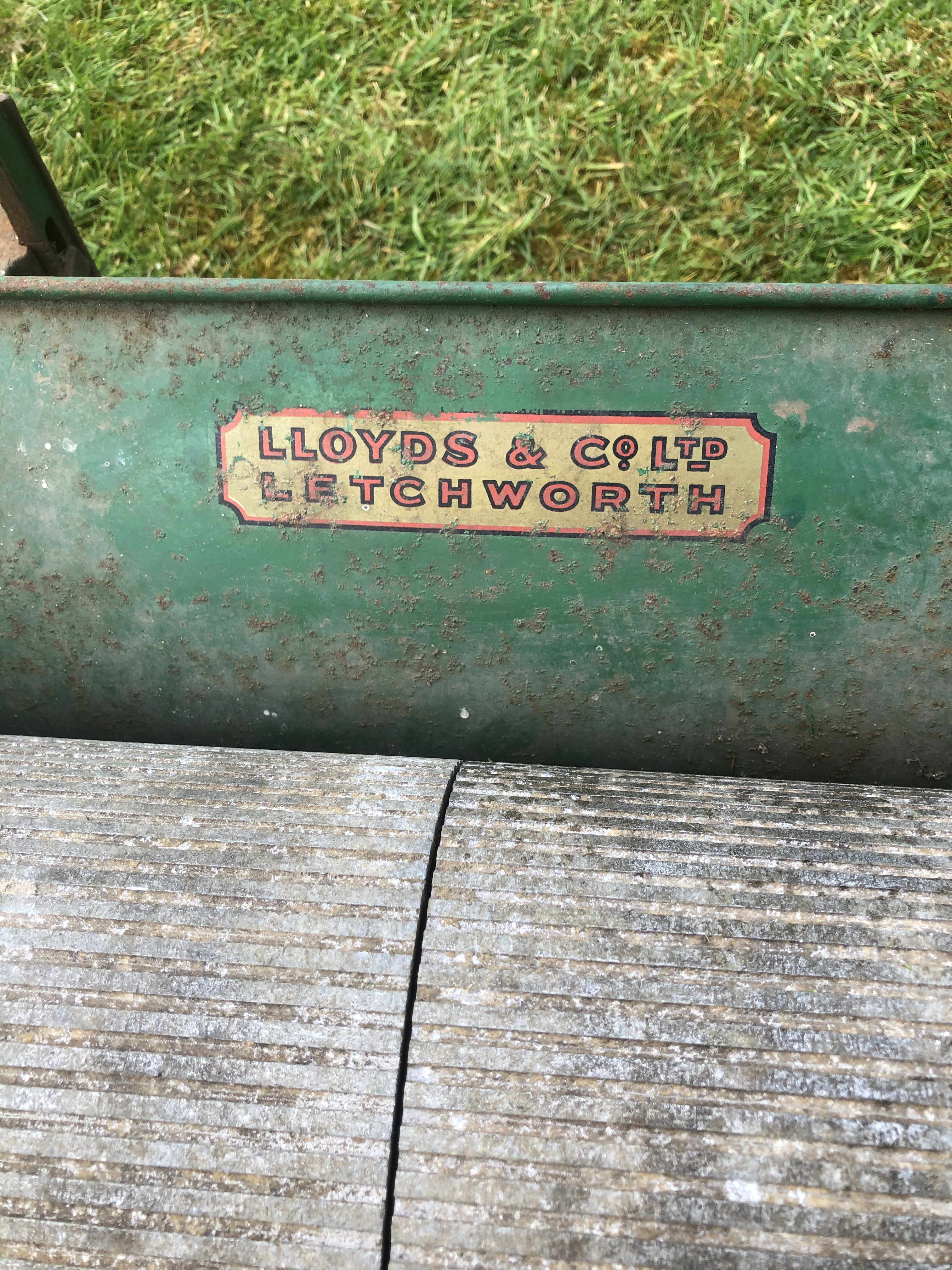 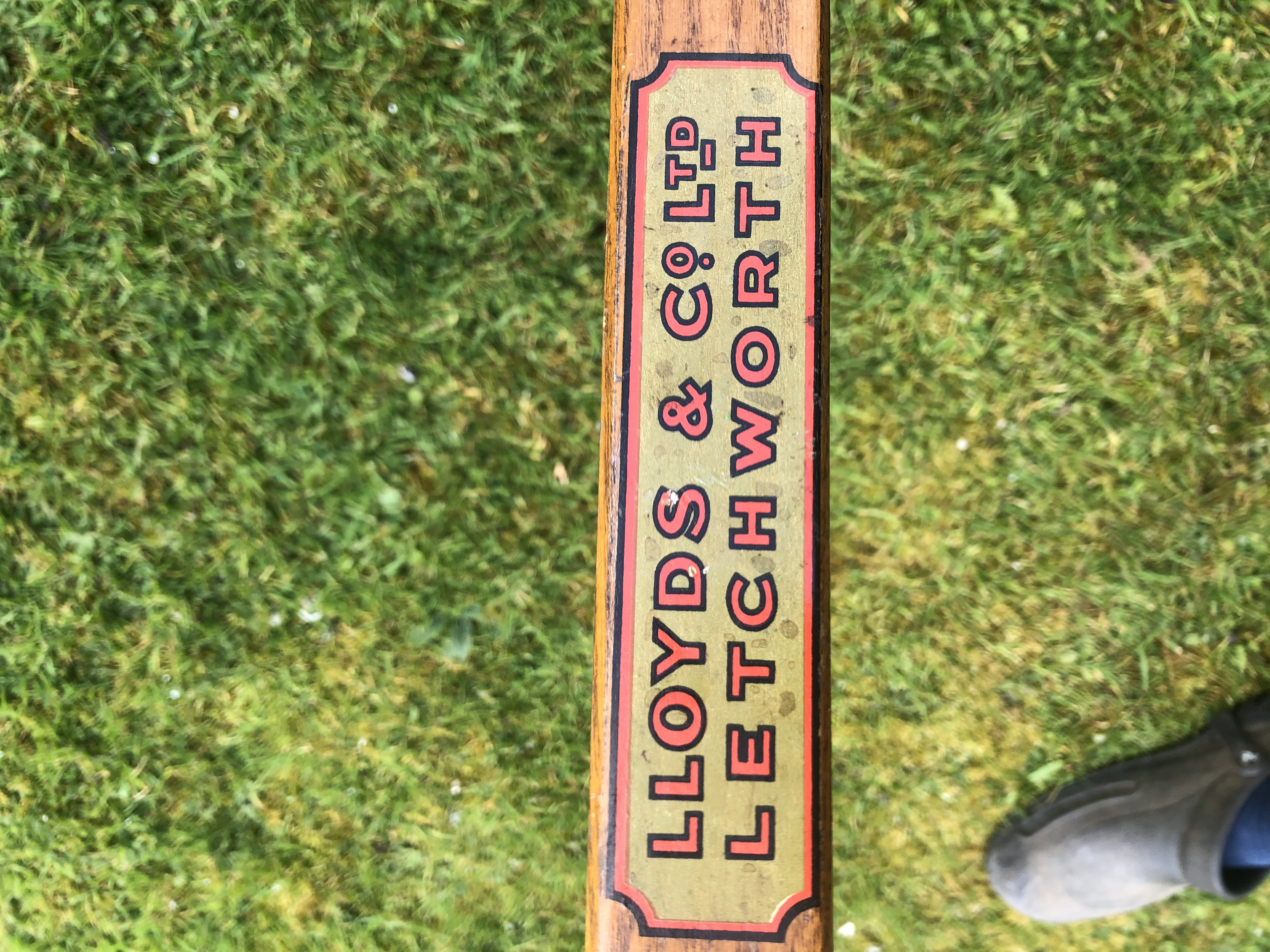 Hallelujah !!  Someone with an actual OLD mower. It's like the second coming. ( private joke, sorry ) Firstly a very warm welcome to the club. Anyone with a genuine old mower is extremely welcome. What a lovely mower. I have one which I attach photos of. The best thing I've found to give a gentle clean is WD40 and a car cleaning cloth. If you spray until the mower is wet with oil and leave for about 10 minutes and gently wipe it off then most dirt comes off. You may have to repeat this a few times. You can use this on the wood as well but be careful with any transfers etc. It certainly doesn't need anything more than preserving. What a fantastic machine. Does it cut well or do the blades need attention ? Ps I love the story with your mower. History behind these machines makes all the difference. Do you have the massively oversized throw plate anywhere ?

Hi, Thank you for your

Hi, Thank you for your response, your mower is very similar but seems somewhat bigger.  You mention genuinely old, but are you able to tell me how old?  I have no idea..... only that it is surely pre-war.

With regards to the "throw plate", I'm sure exactly what you mean but I am going to guess it's the sort of scoop affair that would, I presume, throw cut grass in a certain direction or otherwise away from the blades.   I don't have this, I was not aware it had one, as you can see from the photograph of it in use... So whether it was something that was removed by choice so that cuttings could be removed through some other means or perhaps it was broken or misplaced... I do not know.  I can't imagine it with one, but that's just me since I've known this little thing all my life and of course it never had one.  I've had a quick look around it, and I can't see anywhere obvious that it would have been attached save for a a couple of screws... however in order to see what these screws are doing I will have to clean.  In any case, I don't have it, and it's been unattached for at least 70 years so I should imagine it was long gone unfortunately :-(

With regards to it cutting, I'm not about to test it out.... I think I tried it out once about 20 years ago and it did indeed cut effectively, but nowadays I wouldn't want to put it under any stress.... it has spent the entirety of the last 35 years that I've known it other than that one cutting as an entirely ornamental and family memorabilia piece.  As such I wouldn't want to stress the wooden handle to be honest....

As a final thought for this post, it appears to me that the wooden roller at the front was an afterthought... a possible customisation.  It is noticeably of a different wood and I can't see it in the old photo I attached.  It also seems that your mower doesn't have that either.  What do you think?

Again, thank you for your post and sharing your similar machine!

Hi, a fellow member is going

Hi, a fellow member is going to give you the dates etc. Thanks