Who here owns an Atco Standard?

Having just taken possession of a 14 inch Standard myself, I'd like to become acquainted with other members who have a Standard or two in their collection.

Not so many Standards in collections after all?

I would have expected more, but I'm grateful to those who have said hello.

Who here owns an Atco Standard?

I can understand your feeling of disappointment re the number of folk that have taken the effort to contact you re your mower but what you lack in quantity may well be made up for by quality.

Re the lack of response it has to be remembered that of all the registered OLC Forum users there are probably many that are not actually mower collectors but do have an interest in mowers. I also suspect that there are likely to be Atco Standard owners who are OLC Club members that for reasons of their own do not use the Forums.

We may not all own your type of mower but we (well I am anyway) are still interested in hearing about and seeing photos of your machine and many of the problems that you may encounter will probably be ones that members here will be familiar with having experienced them on other machines.

I recently bought a rusty 18" standard. I have a 1935 vintage car (BSA Scout series 1). My garage is at the side of my house. I am planning to remove the side of the garage and replace with glass panels. The plan is to make the inside of the garage look like an old workshop of which the standard will be part of the display. I will be able  to enjoy the display every time I leave or come home. I also have my grandfathers old lathe which my grandmother bought him as a wedding present in 1934 and a bench mounted horizontal mill that he bought during WW2. The story of  how he got the permit to buy this during the war is another interesting story.

Despite being rusty and being told not run for at least 30 years. 30 minutes after getting the standard home a carb and spark plug clean and some fresh petrol I had it running and cutting grass. I am confused as the carb fitted is a villiers item single lever  best described similar in style to a Amal concentric. I suspect a later fitment.

As I guess many members do having just the one is not good enough and can not help themselves so via ebay and picked up yesterday I have added another 18" standard  fitted with a senspray 2 lever carb and also a 14" HY to my budding collection. They were local so just could not help myself.

My first standard has the grass box but the other two do not.

@Hillsider: The two owners who emailed me definitely fit the quality description.

Your point about owners who are not forum members is taken and I suspect that, as with many forums, there are many members here who read but never post, along with non-members who cannot post anyway.

@Twinnshock: Many thanks for the details about your machines and your plans for a display. It sounds ideal.

Regarding the carb, mine has a single-lever carb, too, and I thought it might have been a replacement, until I read that later Standards employed that type of carb as an improvement.  (As you might know, the dual lever Senspray is very hard to come by these days. I've seen one advertised for more than 300 euros.)

The following extracts from the owner manual might be of interest as regards identifying a Standard as a 1929 model. I have italicized the salient bits:

Manual of Instruction -- References to 1929 Models

(Note: On the 14in 1929 model, the parts Mm and Nn will be found on the inside of the toothed wheel and not on the outside.)

Page 21, Engine Will Not Start:

(c) Defective Plug … To do this, unscrew the central hexagonal hollow-nut portion from the body of the plug -- making use of the spanner bracket, fitted on the handle rail of the 12in and 14in 1929 models for the purpose, and of the special double ended spanner provided on all other models …

(The reference above to single lever control "Atco" carb is not necessarily associated with the year 1929.)

It's encouraging to read how little effort was required to get yours up and running. I intend to do a full restoration on mine, which is missing all of the decompression mechanism apart from the spring valve itself.

I have a collection of 12" and 14" two-stroke lightweights from 1949 to 1957/58 in varying condition from which I intend to build at least one fully restored 12" and 14", for the sake of auld lang syne, having used my father's 14" for years as a kid. Although I was aware of the "Standard" from my knowledge of Atco's history, it never crossed my mind to seek one out, nor did I ever expect to find one here in Australia all these years after they were built.

Then, one day, a Standard popped up on eBay that looked to be in very good condition and the seller was just 15 minutes from my home. I slept on it and decided that it was too good an opportunity to miss and, long story short, I got it. It has been in the same family since new and has been kept as an heirloom until the third generation didn't have any use for it. They couldn't tell me how long since it was last started.

It is complete with grass box, although that has been repaired with a patch, presumably to deal with rust.

I have decided that the Standard will jump to the front of the resto queue as its simplicity of construction appeals to me, and it is a machine that I would consider taking to shows.

Who here owns an atco standard

Hi I had a collection of various atco standards some might call it an addiction spurned on by Stan after watching his collectors lot program.i found them easy to work on and a good looking design.i do not have them now as the ex wife sold them but may one day buy another one.
Regards
Robin

i found them easy to work on

I'm in the process of getting mine going "au natural" before pulling it apart to re-paint. However, my attempts to work on it have been shanghaied lately by other priorities, much to my frustration.

It's currently sitting on a small low-height bench just inside my garage door and many passers-by are fascinated with it.

(Just re-joined the forum after some time and seen your post.) I have an Atco standard too (plus several post-war Atcos) in unrestored original condition.

Bought mine about 12 years ago from a chap in Hemel Hempstead who had owned it many (50+ years) - he told me it had belonged to his father who was a greenkeeper at a tennis club in Rickmansworth, Hertfordshire.

It has a label tied to the handle bar from when it was serviced in the '60s.

Not sure of the year it was built but the person I bought it from reckoned 1927. Would never restore this one as it appears all original. Has the grassbox but the toolbox is missing.

Thanks for the post. I know the history of mine as it has been in the one family for 3 generations, the latest generation having no interest in keeping it around.

It was bought to maintain the grounds of this grand house, now restored and part of a school:

I have a 30" ATCO Standard. It has a 500cc JAP engine and I think it was made in 1926. I have a roller seat for it but possibly not the correct type. I need to get a decent magneto and then the engine should run.

Not having much joy viewing these !

Superexcellent's flickr image links are not working. Maybe Admin can fix them? 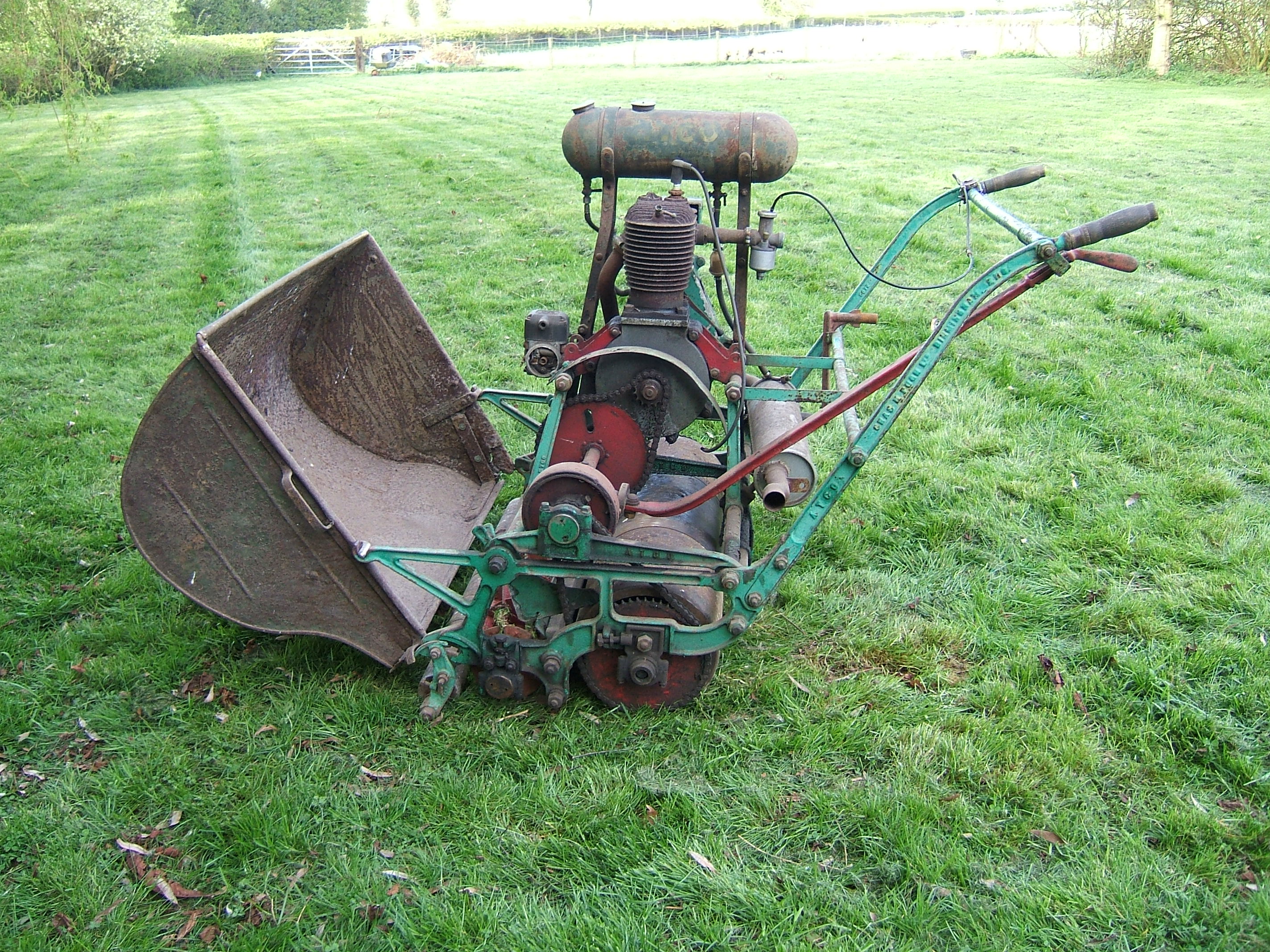 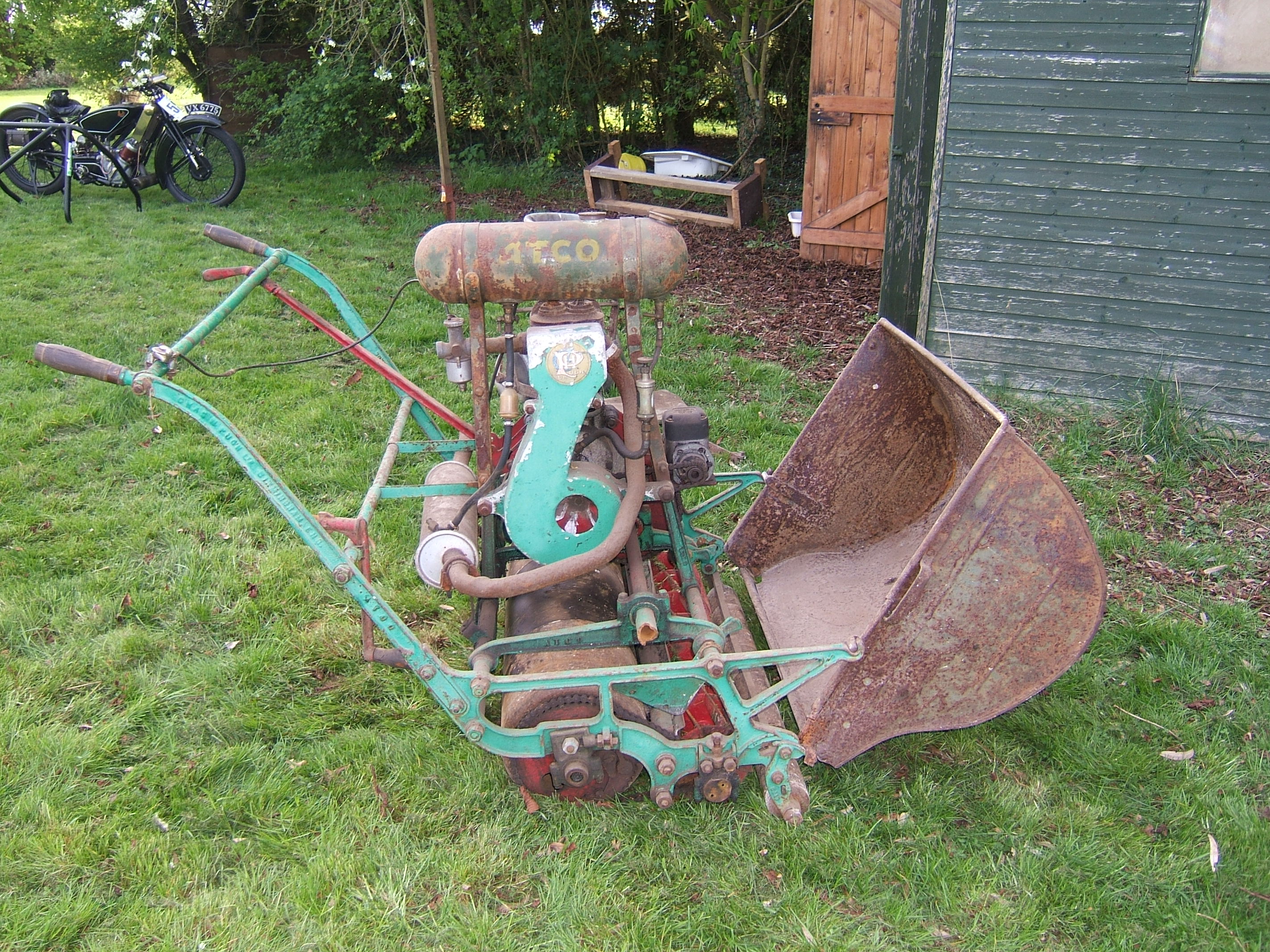 That's quite a beast, Superexcellent!  Hope you have success in finding a magneto.

(What's the motorcycle in the background?)

Thanks for sorting out the photos Admin, I must learn how to post them properly. The bike in the background is a 1930 2 Speed Scott that I restored about 20 years ago. The mower is really a diversion. I was almost given it by a friend who thought it would be appropriate for the garden. My main interest is Vintage cars having a 1914 Vauxhall and 1924 Alvis.