Why I have an old lawnmower

This is a bit of a journey through my mind as to how I ended up with "old lawnmowers".

It started out when I got my first house with a "real" garden - I have moved outside the city so the houses come with gardens bigger than I ever knew existed, then I suddenly needed something to be able to look after it with.

Since I was short of cash, my first purchase was a non-running suffolk punch 43s - bought for £20. It wasn't that old, being the 114 aluminium engine with dellorto carb. My intention was to learn how to repair it, or at least entertain myself whilst failing. Much to my surprise, once the carb was cleaned the "non-runner" started and it only needed a bit of mechanical adjustment to cut the lawn, but by that time I had fallen in love with the simplicity of old engineering. I also hate the currently culture of throwing things away that can be simply repaired, which couples well with the old machines that were designed to be repaired or maintained rather than thrown away. This mower is currently in the capable hands of a good friend who takes delight in putting stripes on his inner city lawn that is about 10 feet square :)

My next purchase was again for £20 - an alleged 1961 Suffolk Punch, bought along with the "world's most temperamental grease gun" from the mower's original owner who was downsizing. He had used it since new and looked after it, although it had 2 problems. The first was that the cylinder is worn right down and it won't go down much further, the second is that the roller had partly perished. I have a lathe so knocked up a replacement set of rollers from discarded 4x4 mahogany from a window manufacturer. Much larger than the originals, but then again my garden is a bit of a rollercoaster ride, so the extra headroom comes in handy :) This mower is my bread and butter now, starts first time, cuts beautifully, only needs a once per year routine of greasing, fresh oil (I bought some "golden film sae 30") and the blades adjusting.

Then I saw on ebay the mower's identical twin - a 98g14 1a , sold as a non-runner. This was my most expensive one so far - I paid £50 for it - and again, I was the second owner as this one was owned by someone's grandfather who had passed away. This one needed more love, but it was bought with the intention that if the worst case I could swap the cylinder out or cannibalise it for parts however I am getting more confident with my imperial spanners now - so a good clean up, mostly attention to the points, and off it ran. This has caused me 2 problems so far, the first being the engine not picking up speed from idle, and now a problem with the clutch. This mower has obviously a whole lot less miles on it than the first one as the cylinder is noticeably bigger, plus the wooden rollers have virtually no wear so I am optimistic about having 2 working mowers.

So why do I do it? It's not due to a idealistic view of the "world as it used to be", although the sound of the Suffolk engine does bring back memories of my youth. It is not because I aim to preserve the old lawnmower for it's own good. I actually enjoy tinkering with them, and learning about them and mechanics in general. I come from an era that throws things away when they break - whereas I have a mentality that tries to fix them (some people such as my parents have mistakenly attributed my past attempt at fixing things to "breaking them" but that is a simple mis-communication :). And I enjoy learning about them.

I got on well with my ex-neighbour Frank, who was a mechanic for longer than I have been alive, and we believe that the art of fixing things, or making things that last, is long behind us. I dread to think what happens when we fill up the landfills and all of the old engineers have retired - so I like to think that I am "doing my bit" by re-using something and looking after it.

But most of all, the reason I have old lawnmowers is here : 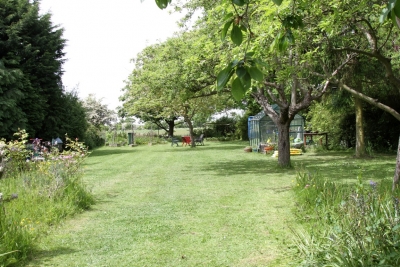 It's simply the best tool to get the job done.

What a cracking garden! Hope

What a cracking garden! Hope it's a sit on one you have no better chance of ever getting one else.

I'll do mine in one run....(not that bad really but nothing like yours.