I'm new to the club / forum and I look forward to being involved.

Where lawn mowers are concerned, my particular interest is in Atco, from the 1950s to 1970s. My parents had an Atco when I was a child and from about 11 years old it was my job to mow the lawns, something that I always enjoyed. A family friend had an Oxford Allen scythe, and I also have fond memories of using that in my early teens to keep his meadow tidy. I imagine he felt that I was safer behind it than in front! It would probably have social services screaming today.

I've just purchased an Atco 17" that isn't running and so I'm aiming to restore it. I have an interest in classic cars too, owning a 1960s TR, so I like to do a bit of basic maintenance. I thought a mower might be an easy way into working on the more complex parts of an engine, but the more I read on the subject, the more I think that that might be wishful thinking, so I suspect I'm going to need some help and I'm hoping that I might find it here.

I've had a look around on the forum and can see that there is a lot of useful information. It could be that I've missed it, but is there a list of all the Atco models made in the '50s, '60s and '70s?  I suspect I'll buy a few more Atco mowers, so such a list might help me with that.

I'm collecting my recent purchase later this week. The seller said it's a "B17", but I'm not sure it is. I've attached a photo. I believe there was a B17 Deluxe, but I think that was a later model than what I've purchased. One other thing I'm not sure about is if there's an easy way to tell if it is two stroke or four. 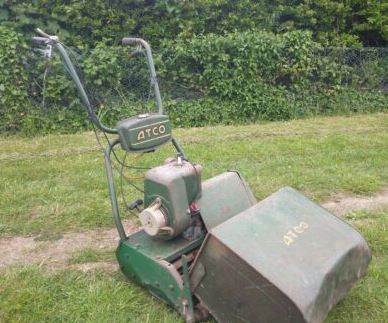 Yes, that's an Atco B17 deluxe (for some reasons, we always referred to them as DR's)

Wonderful, thank you for that

Wonderful, thank you for that information. Once I've collected it, I'll count the bolts as suggested. Glad to know it's a four stroke.

Would you have the production dates for this model. I imagine it's late '60s through to mid or late '70s. Does that sound right?

You are about right with the

You are about right with the date, checking my old brochures looks like that model came in around 67/68 & continued with little change for 10 years or so.

Curious as to which model TR you have, I remember a school trip in 1968 (I think) to the Triumph factory watching the TR'5s being made & rolling off the production line.

Always dreamt of getting one, but ended up with 150+ mowers!  I always feel the 5 was the last real TR, the 6 & 7 getting a bit less mean looking.

Many mower collectors used the excuse to start with mowers as they take up less room/ cheaper than classic cars, but when you get to a dozen or more the argument is defeated.

Welcome to our fantastic hobby, plenty of like minded people/help available from the club & forum.

Thanks for confirming my thoughts on the dates. My parents had one which was either the model I've bought, or the 14" version. I know we had it in 1975-76, because that's about the time I was let loose with it, and I think we'd already had it for a few years by then.

You are lucky to have had a school trip to the Triumph factory and to see 5s coming off the line. It's a 5 that I have. It's a great car and over the years I've owned it I've been learning general maintenance and servicing. I won't be rebuilding gearboxes or engines anytime soon, but I'm happy to be able to do the basics.  Thankfully it had a full restoration before I got my hands on it! I don't mind the look of any of the other TRs in the range, but I think the 4 and 5 have the best looking bodies (both the same), and for me the addition of the 6-pot, 2.5ltr engine to the 5 is the deciding factor.

I'm a bit of a collector of vintage bits and pieces. One of my other, some would think unusual, hobbies, is collecting and restoring straight razors, mostly Victorian. I think I got my love of antiques from that family friend I mentioned in my initial post, the one who would let me use his Allen scythe. He was an antiques dealer and his house and shop were full of fascinating bits and pieces. He had steam engines too, another passion of mine.

I've got a feeling that the other half of my garage might end up with a few mowers in it. It'll probably save the TR, as I like to tinker, and if I have mowers to play with it'll keep me occupied.

P.S. You would be right on the date of your factory visit, as the 5s were only in production from mid '67 to mid '68. They were a stop gap between the same bodied 4A and the 6, which was a different body, but had the same engine as the 5.

Hi Darren, look forward to seeing your restoration project, parts schematics are very helpful not to mention the excellent advice on here.

Motorbikes are nearly as easy to squirrel away as mowers :-)

A schematic of the B17 De Luxe would be very useful. I've seen the one posted for the B17 Commodore, which I understand is reasonably close in design. Are there any about that you know of specifically for my model?

Looks like I'm going to have to try some panel beating with that grass box, or find another.

Motorcycles is not a route I've gone down yet Chris, but I never say never.  Wife reckons I'm getting dafter in my old age, so who knows what I might try next.

Perfect, thanks for that

Perfect, thanks for that Wristpin.