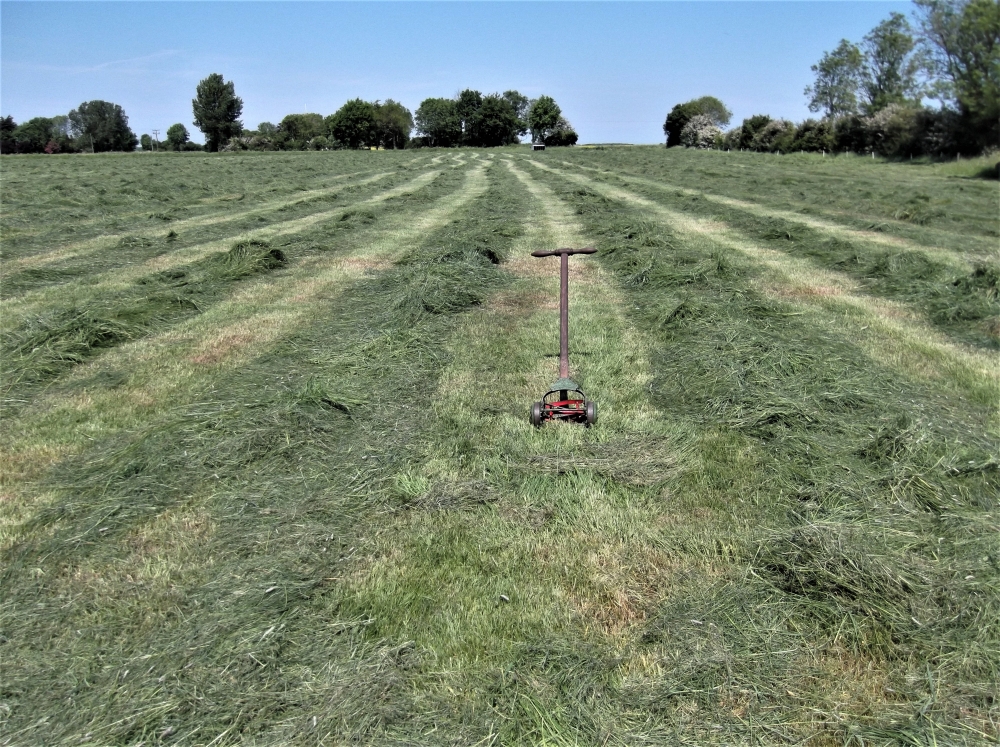 Well, this took longer than expected, perhaps I should get a bigger mower.

Ransomes New Paris was being actively advertised in1886 and said to be suitable for long grass, as well as wet, dry and short. Available is sizes from 6" to 16" in two inch increments, this one is an 8". Seemingly very few of these survive but unexpectedly another the same size has just been discovered. Initially un-identified it is currently undergoing evaluation and conservation. 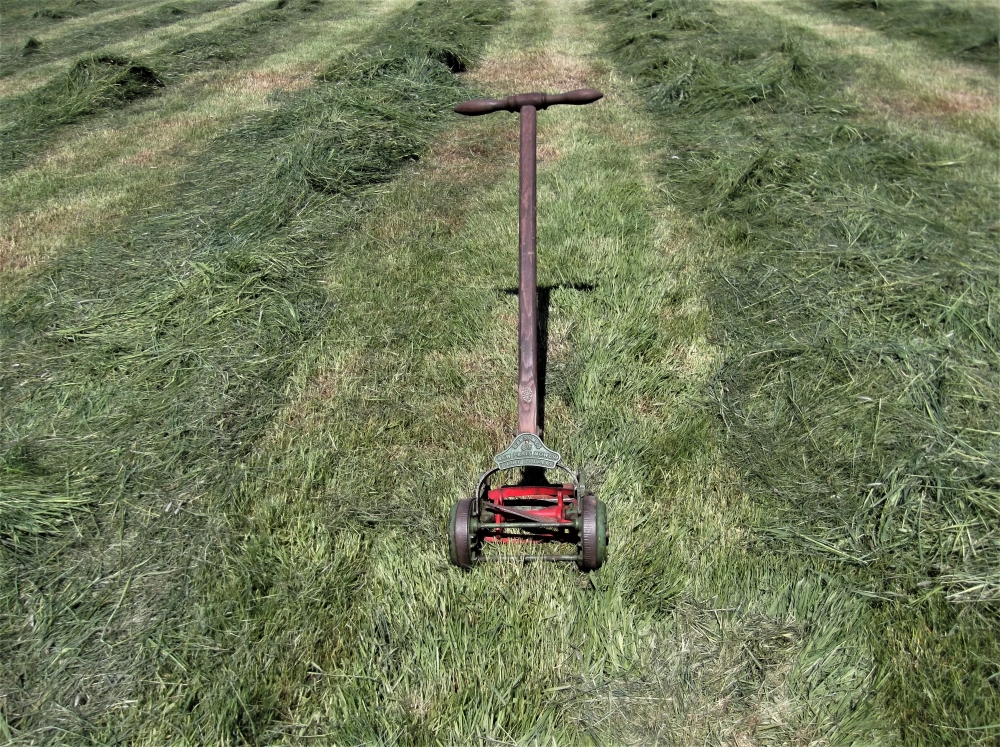 What a lovely mower Colin.

What a lovely mower Colin. The New Paris is so easily identifiable  by the extra bulbous wheels. You did well to cut that field !

Ps, if there's enough support I might do a side wheel only virtual display to go with the one I did over the Bank Holiday.

'One man went to Mow' comes

'One man went to Mow' comes to mind Colin!! Great looking mower. Hi Sean. I only have one Sidewheel mower in my very small collection of 13 push mowers, a JP Matchless so would enjoy seeing your Sidewheels thanks. Cheers both. Rob

Looking forward to seeing it

In the interest of making the best use of the space all my sidewheels are accommodated at first floor level. The bigger, heavier machines like the 19" Pennsylvania are installed using a vintage, if not antique, Tangye chain hoist. The slight downside of this is no natural daylight to speak of so I'm still trying to achieve  'studio ' lighting for photography. For this reason these mowers only come out in one's and two's.

Ok, I'll try and do something

Ok, I'll try and do something on Sunday. Some will however be missing as they're at another site.? I should be able to rustle up a few.

Colin touched upon another

Colin touched upon another New Paris having been discovered in his opening comments & here it is, as said very few appear to have survived so its always exciting when an un-recorded one emerges.

Several members were involved in ensuring this mower was rescued & will be preserved in the safe hands of a club member.

Advertised as  'Vintage push along lawn mower, Would look great as a garden ornament' the image did not show any clue of make or model, (1st Image below) eagle eyed member John Dyer spotted it mentioning it to me & was wondering if it was an Ransomes Anglo Paris ?, being unsure myself at that stage I was curious as to the heavily pregnant wheels & knew this indicated something early, keen to ensure said mower did not end up in a flower bed I immediately contacted the seller & agreed to buy, already having alerted another member Clive Dunmow who lived nearby to collect it for us at the earliest opportunity and bring it South on his next visit.

I sent images to Colin Stone, Christopher & William Proudfoot who all confirmed it was a Ransomes New Paris, although at that stage we had not seen the lettering on the wheels.

The mower has now arrived and is undergoing a bit more investigation, it has a replacement handle (early Qualcast) repair to bow irons & small amount of damage to two cylinder blades, also missing its badge, but not bad for a mower that was only produced from around 1886 to 1891approx. We are all in discussion about some other aspects of the mower, in particular the inner wheel castings, the 'U' shaped one is for the handle/brackets of the front delivery grass box, however we are undecided as to the purpose of the the straight sided ribs with a small hole in the centre, (see image) as on Colin's an extra thinner crossbar is present but not on ours or indeed the Proudfoots. Any ideas anyone? 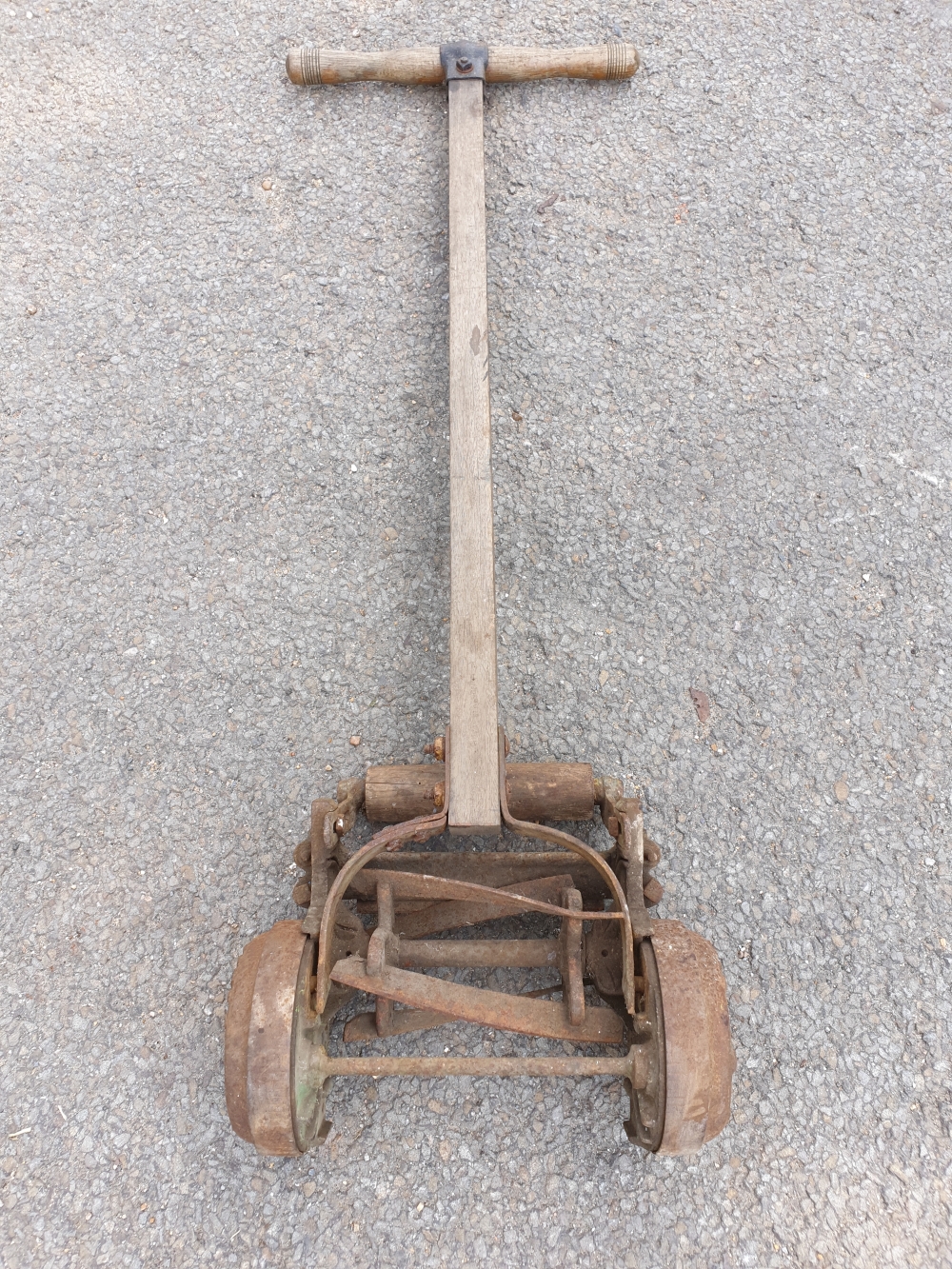 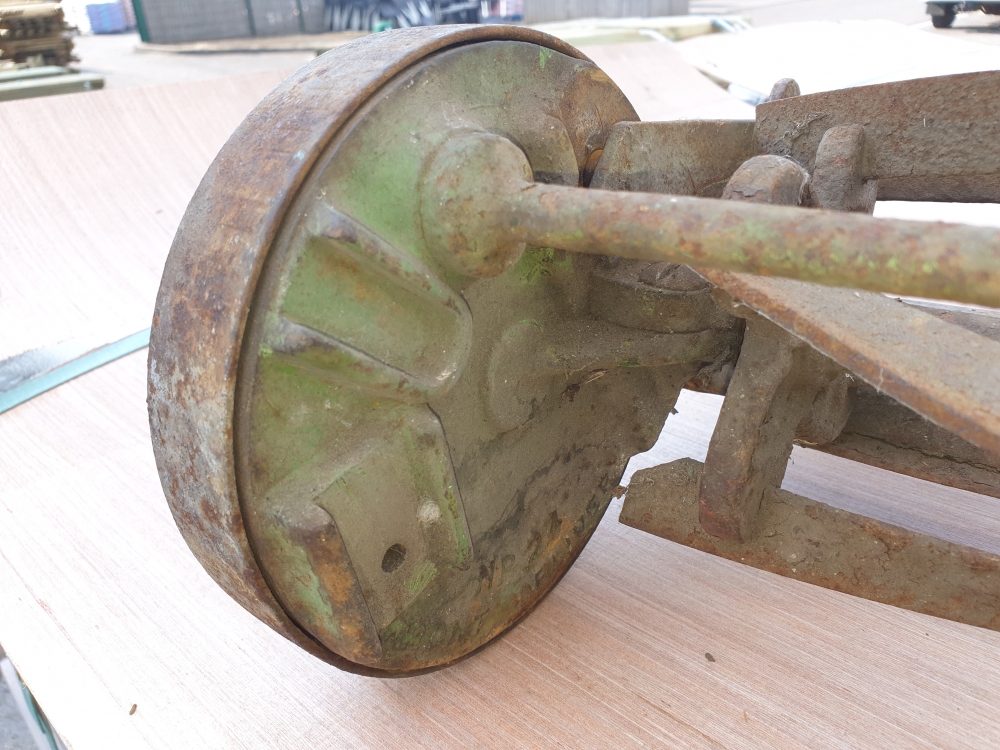 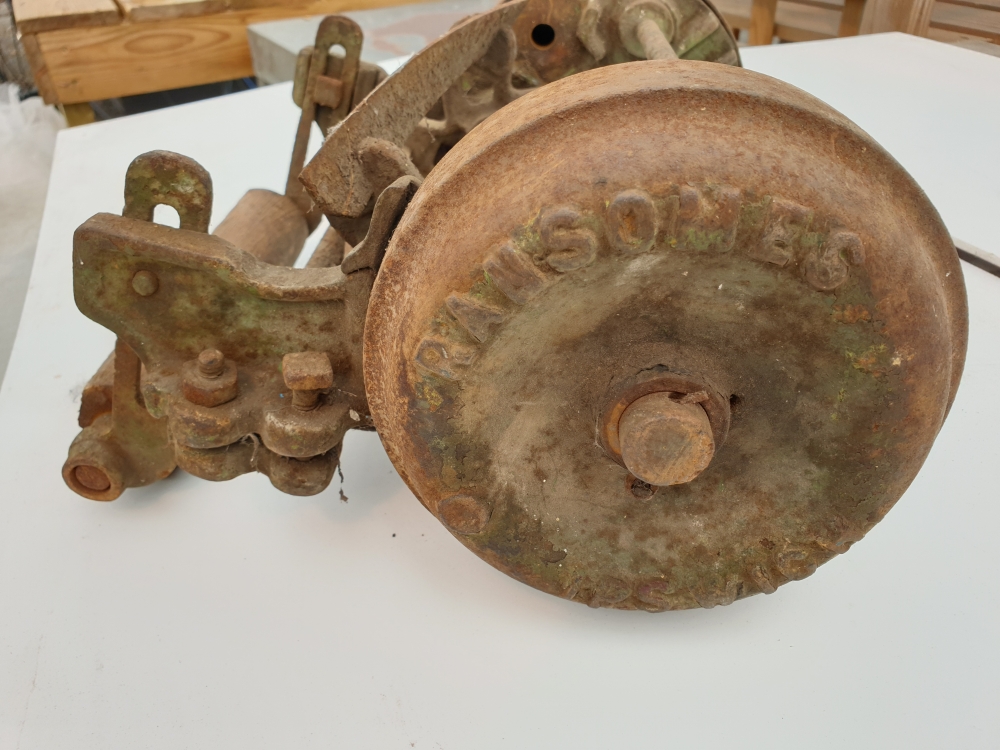 I'm sorry that I won't be

I'm sorry that I won't be able to do a side wheel virtual display for a few weeks as my side wheels are scattered to the four corners of the South East at the moment. I will do it at some point. Keep an eye on the forum. Thanks

Adding to Clive's photo's of

Adding to Clive's photo's of the recently discovered machine here are some more detailed shots of mine : 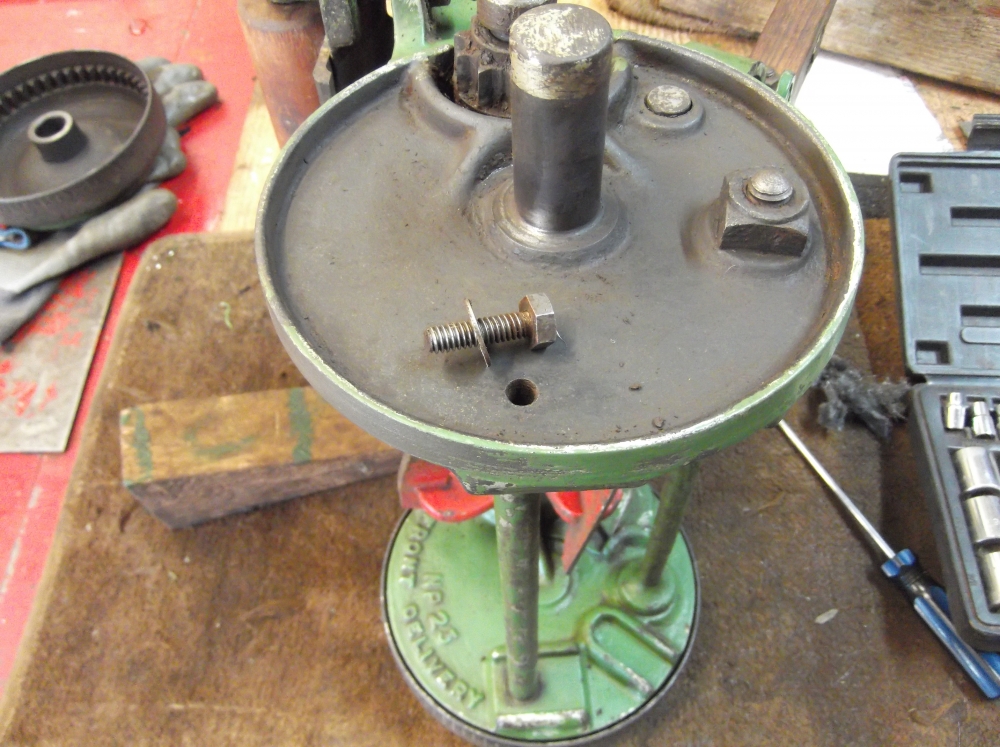 Clive was slightly in error stating that the lower stay is thinner than the upper, it is slightly thicker.

Ransomes original publicity photo shows a different machine to these two and this is borne out by the parts list which lists two different badges, two pairs of box brackets and even two cutting cylinders which utilise different pinions. 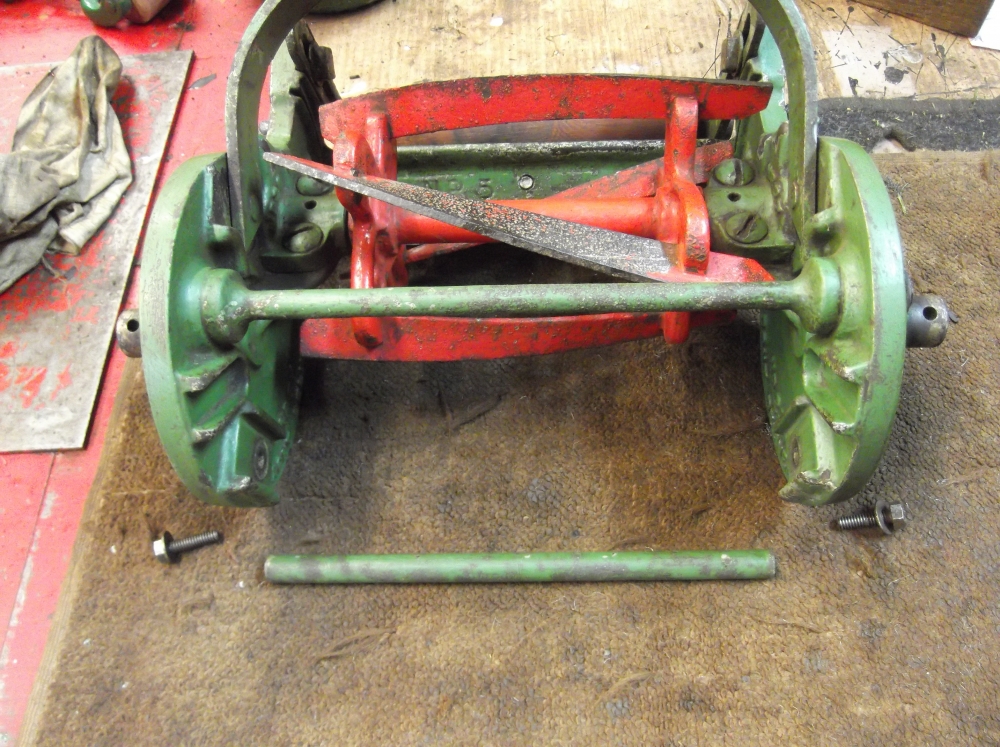 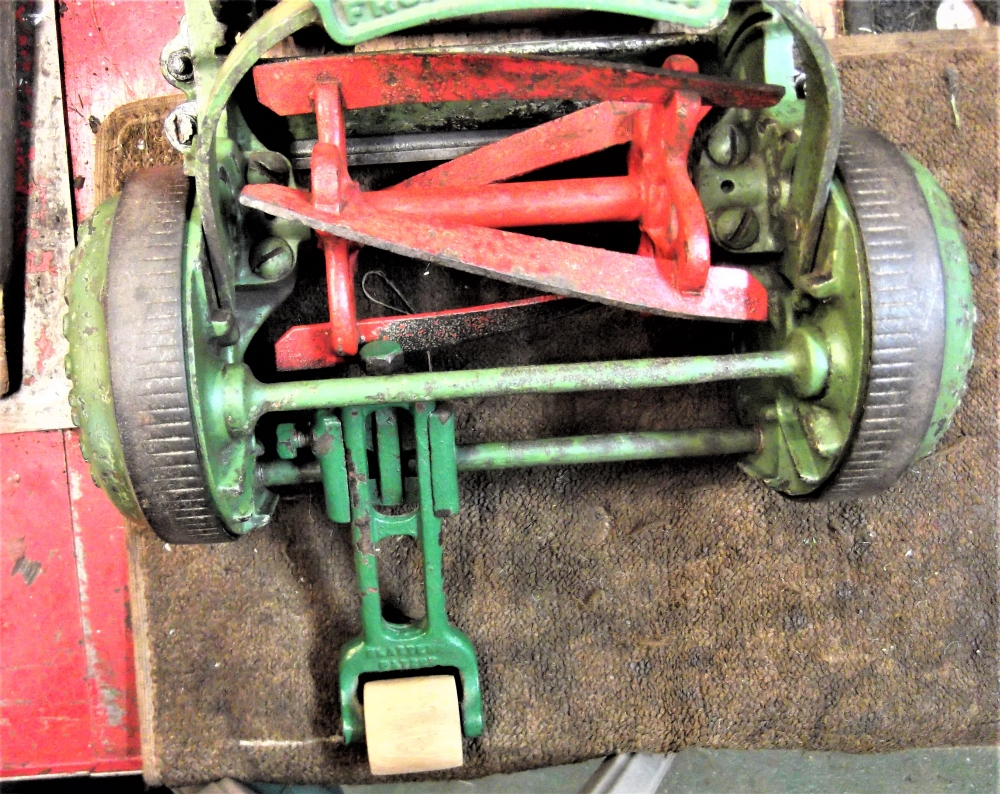 The front runner fits as normal on the upper stay : 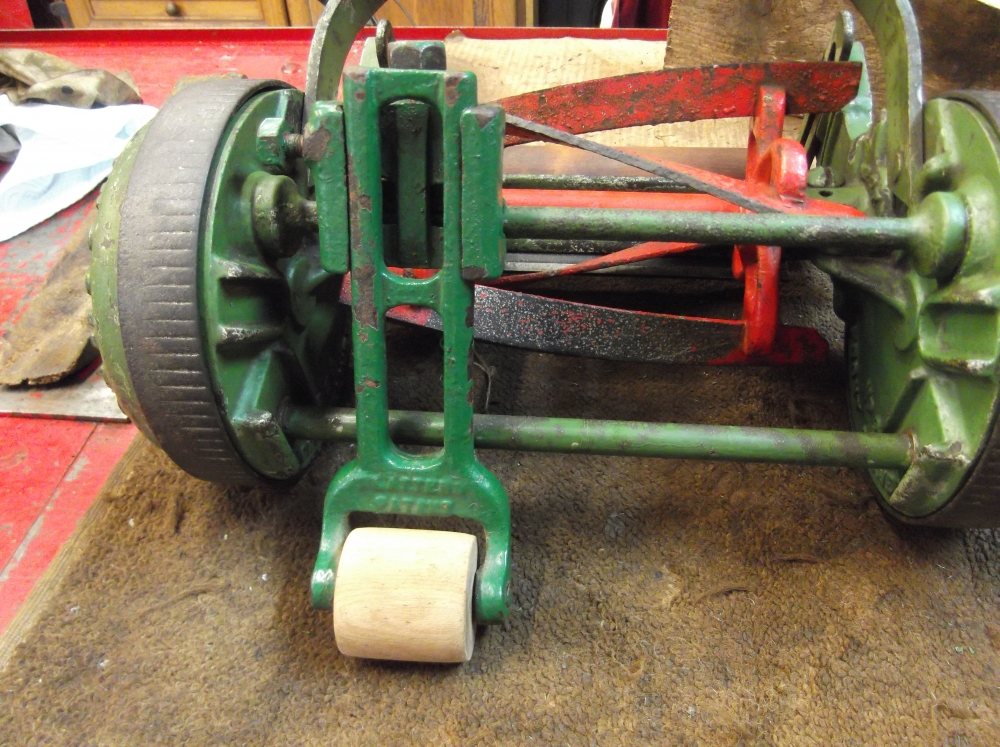 Unusual cylinder pinion too, in my experience : 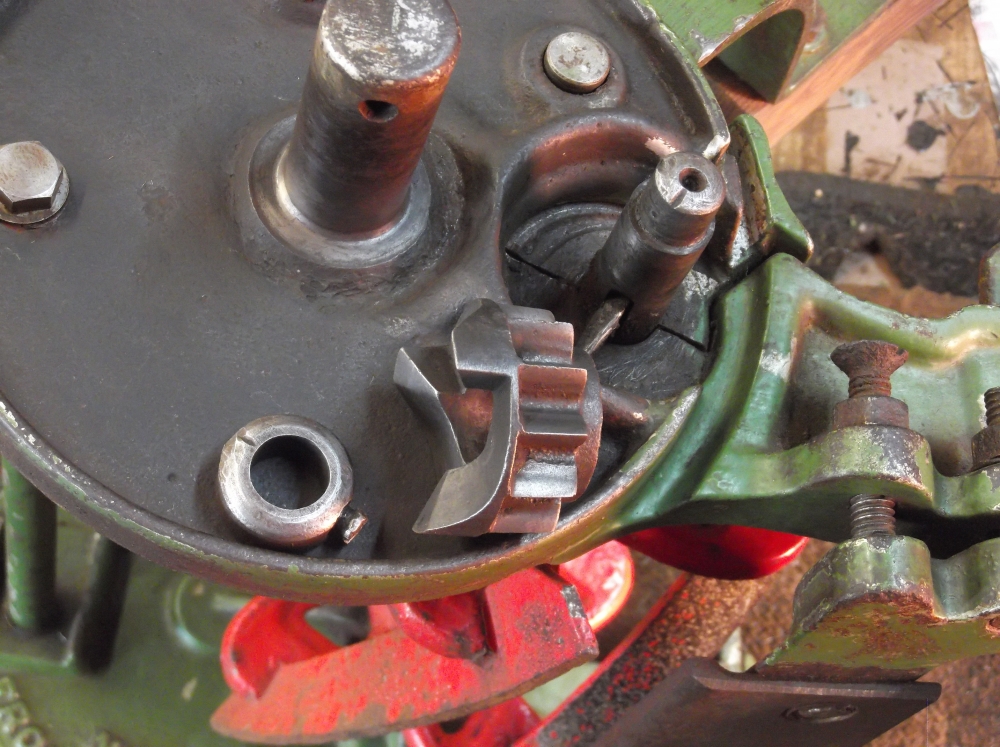 The function of this casting and the lower stay therefore remain something of a mystery. When I get a moment I shall get the Anglo Paris out for comparison. This has grassbox brackets which would fit the slots in the New Paris, although the machines are different sizes it may provide some clue.

Yes all very interesting, when I said thinner I meant the end of rod which goes through a much smaller hole.

I am assuming the 2 different badges are one for Rear Delivery & the other for Front as is actually states this on badge. The different styles of grass box bracket are again one set for front delivery the other for rear

Does it make any sense in having different pinions for front or rear delivery? Bearing in mind the parts list shows, different side frame's, badges, & brackets for each version, perhaps they had different cylinder fixings?

We really need to locate a Rear delivery machine!

Yes, we definitely need to

Here is the comparison between the New Paris and the Anglo-Paris : 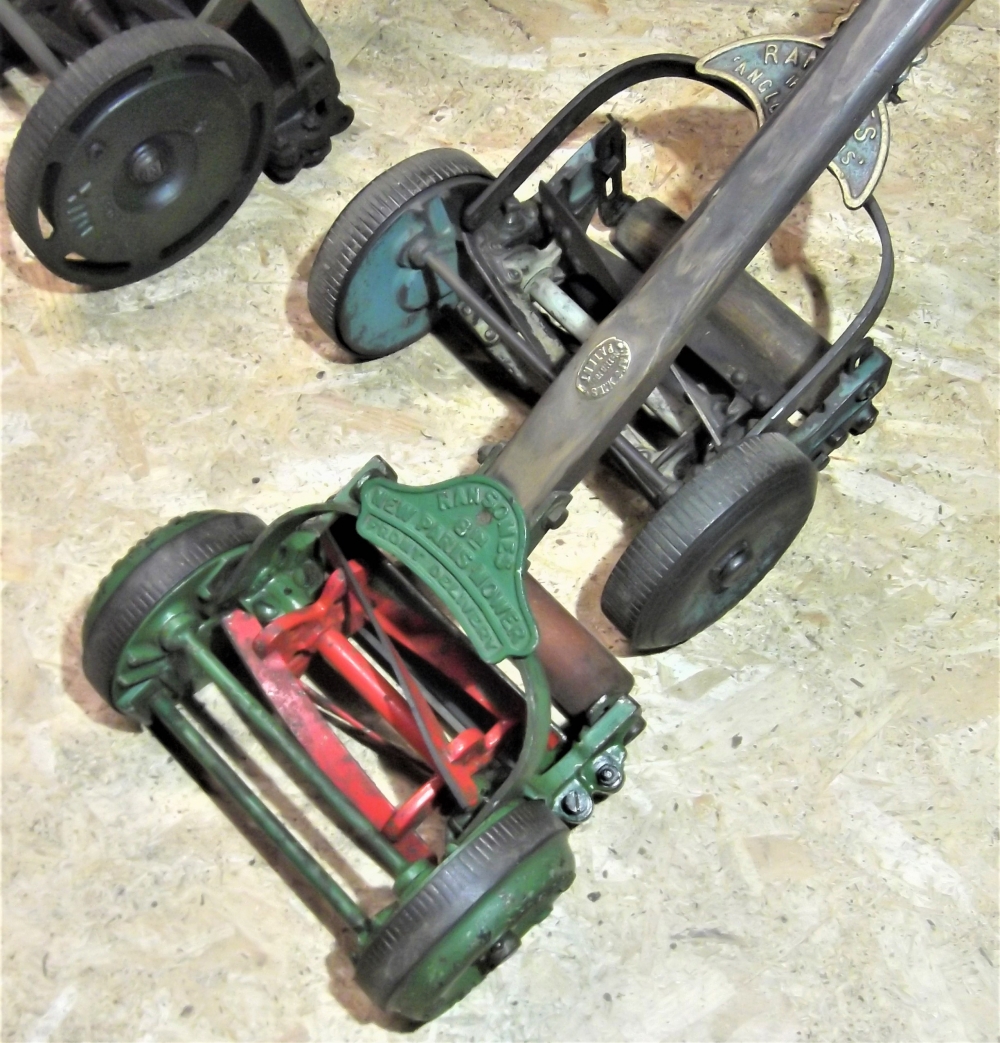 The Anglo-Paris grassbox bracket in relation to the New Paris slot : 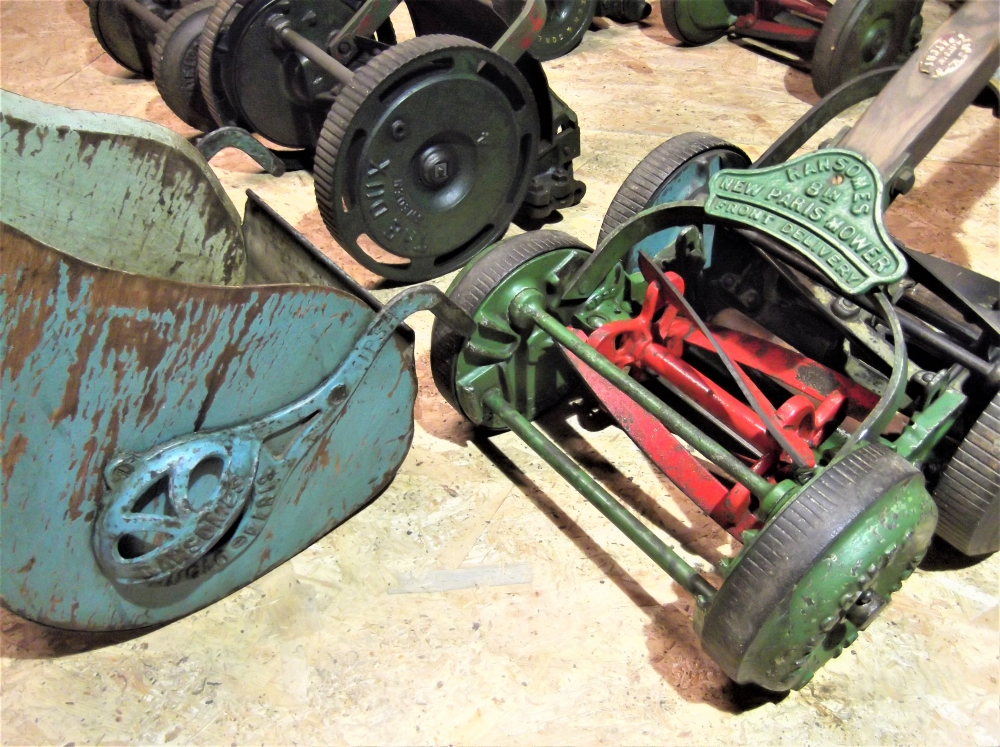 Clearly for this to work the bracket needs to be a different shape, here it is from the parts list where it is described as the '' grassbox hook '' :

The grassbox needs to be supported by the stay rather than just rely on the slots cast into the side frame. Could it be that on these New Paris examples the second, lower stay was used before Ransomes developed a design ( Anglo-Paris type ) that attached the ' hook ' higher up which rendered the lower stay un-necessary ?