The only thing left to do now on my 1935 (Thanks Clive, for setting me straight on the year) Atco 14" is a load trial now to ensure the mower can function/perform under load, which might be this Saturday, I don't know, we'll see.  I'll take some video of it (if it performs!).

That being said, the next mower up on my bench is a 1954 Atco 14" (I'm pretty sure about the year, the machine no. is 1454 NME), primarily because under load in my back garden it kept stalling on me, and this was the result of something getting jammed or bound up somewhere in the drivetrain from the motor to the cylinder cutter. At the initial run up, I ruled out the clutch on the motor as I couldn't find any signs of binding.  On Tuesday I swapped out my 1935 Atco for the '54 Atco on the service trolley, then truly struggled to get it to catch and run.  I resorted to an electric drill and an 11/16" socket which bore some rather short-lived results: it would fire up, then when I opened the choke it would overrun then die just as quickly.  Went through that process about three times before I sat back to have a think.  It has spark, otherwise it would've never started, the timing must be correct otherwise it would have never started, no obstruction in the silencer (I checked), and it's getting fuel - but is it getting a steady supply of fuel?  So I pulled off the banjo bolt and discovered sludge in the passageways of the bolt.  I then decided to give the tank, petcock and fuel line a thorough clean.  And a good thing I did... I found still more sludge in the petcock valve, but the bowl above was only from the fuel tank, and nowhere else!  I figured I'm going to need to clean down the carb, but in the meantime figured I'd put everything back together and give it a run to see if it'll run after all, and if so hopefully catch it 'in the act' of binding on me. No such luck.  I pulled the '35 Atco off the service trolley, placed the '54 Atco on, strapped her down, and I got her fired up on the 2nd or 3rd kick. After a little up & down, I got her settled into a steady RPM and then engaged the clutch. It worked just fine; the drive roller spun as did the cylinder cutter, no problems whatsoever.  I let her spin away like that on the stationary trolley for what must've been a good 15 minutes or more, waiting for something to happen, but nothing did.  Frustrated, I took the mower off the service trolley, wheeled it into the back garden and put it under load.  It didn't move 3 feet before it 'locked up' and shut down completely.  Back to the workbench now, and time to see what's happened...

My hands were far too greasy and oily to take the pic of what I noticed with my iPhone, so I've added a pic with illustrations to show what I saw: The chain had skipped the teeth of the drive roller sprocket (1), placing a lot of tension on the intermediate sprocket set (2), which in turn stressed the drive chain to the cutter.  When I corrected this, I noticed a considerable amount of play in all directions around the spindle (2), and the drive roller chain seemed too loose to be correct; when I pulled the key link out and tried to figure out how many links extra there were, however, I couldn't even get to half a link overlap, much less a full one, so I figured it had to be correct, and the slack in the chain probably caused by the slack of the intermediate sprocket to the spindle.  On closer examination I noticed the spindle appeared to be bent as well, which could be the root cause of the binding, after all. I've since taken all of the gears off and begun a thorough cleaning.  Has anyone ever experienced this issue with this model of mower before?  It looks now as though I'll need a replacement spindle and possibly an intermediate sprocket set since the bushing on the original one is probably too worn to be reused.  I've purchased these off e-bay.

Disassembly was pretty straightforward, and perhaps simpler than the 1935 Atco.  In comparison, it appears the '35 Atco was probably over-engineered a little, but not uncommon I suppose given the period of manufacture.  I had the entire mower broken down into its individual parts in less than an hour.

The engine, a Mk I midget I believe, is a happy little runner, however when I took the silencer off to inspect the barrel the port was caked in coke, so I'm going to go ahead and invest some time and money into completely restoring the little midget - I'm going to install a new HT lead, probably replace the points, condensor and coil, give the crankcase and magneto castings a good, thorough cleaning and polish, and the barrel a decoking like I had done on the '35 Atco.  This will be its own little project, separate from the mower.

My 1454 also has NME stamped into the ID plate,at a different time by the look of the typeface .

Anyone have any idea what it refers to?

My 1454 also has NME stamped into the ID plate,at a different time by the look of the typeface .

That was also on a machine that I overhauled and have since sold. It was the subject of several posts and suggestions but without a definitive conclusion being reached.

An image of the intermediate spindle without the sprocket, would be helpful. I believe that the part that secures it to the chassis side plate is eccentric to the shaft that the sprocket runs on to allow for some adjustment.. If there is wear between the sprocket and it’s shaft and there’s no replaceable bush it is probably possible to ream out the sprocket and press in a bush.

Well, My second Atco 14" is complete.  As with the '35 Atco, I've disassembled this one down to the last bolt, and sent off the parts to  GLW Engineering to give them a good sandblasting, then painted up the parts in a teal green (same as the '35 Atco) using a mix of 13:2 Hammerite Smooth Green to Hammerite Smooth White.  I repainted the cylinder cutter and clutch components Hammerite Smooth Red. 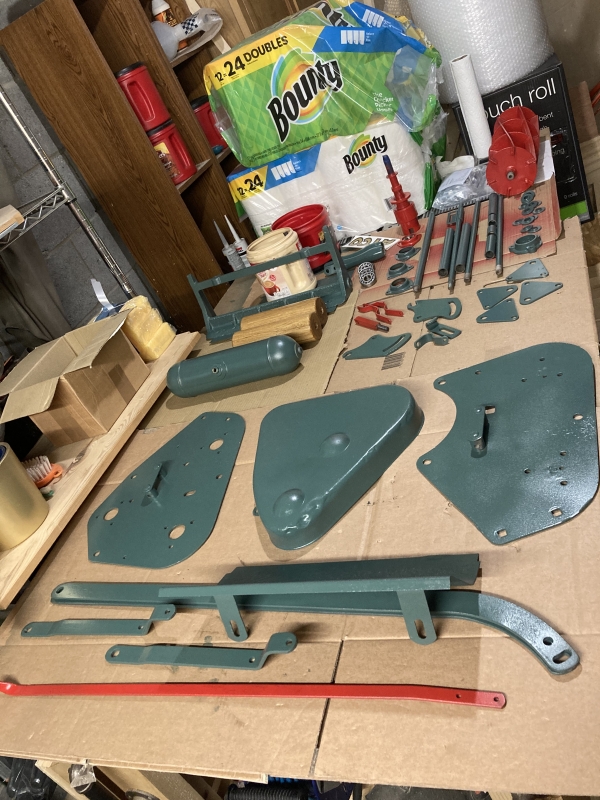 Replaced all 5 bearings, and swapped out the two-stroke with another Villiers Mk I (while I restore the original motor as I had mentioned previously).  Due to the reduced level of engineering involved re-assembly was a little trickier than anticipated largely because it took a certain level of coordination to get everything lined up to attach the chassis plate - like the last one, I chose to re-build as I had taken it down: on its side. 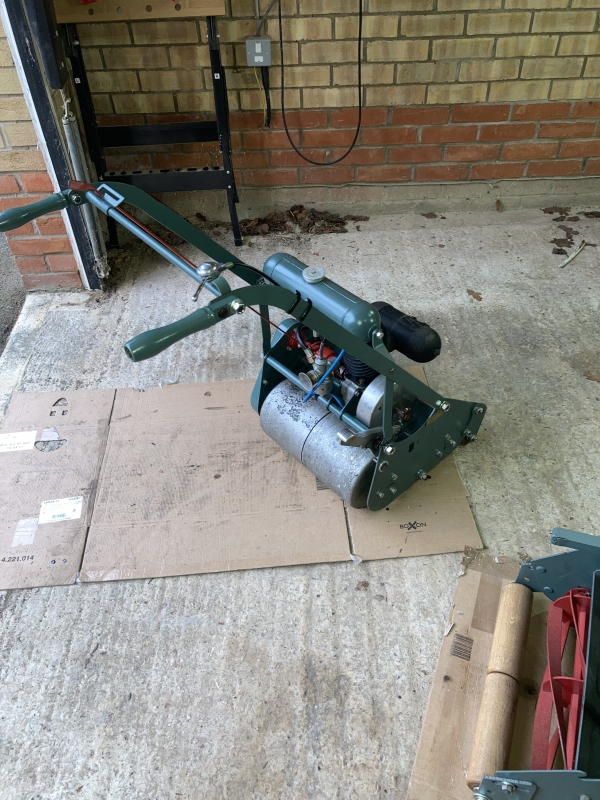 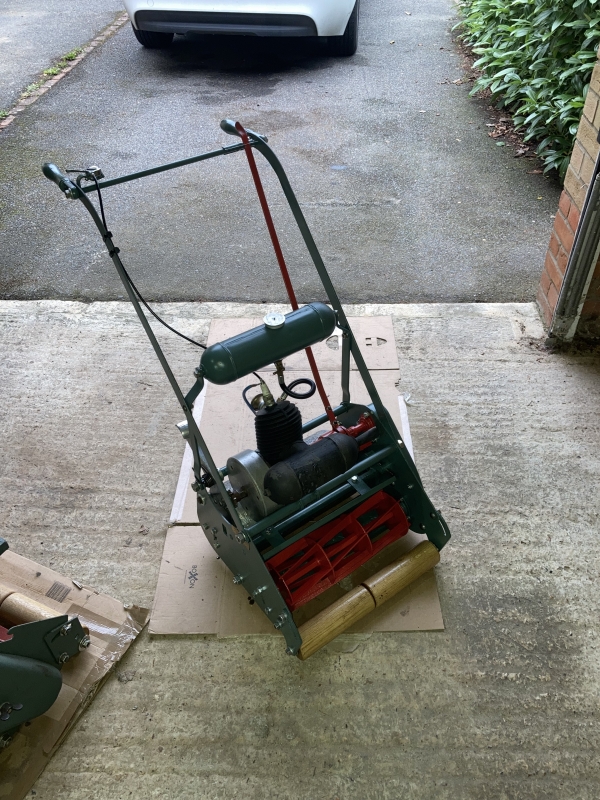 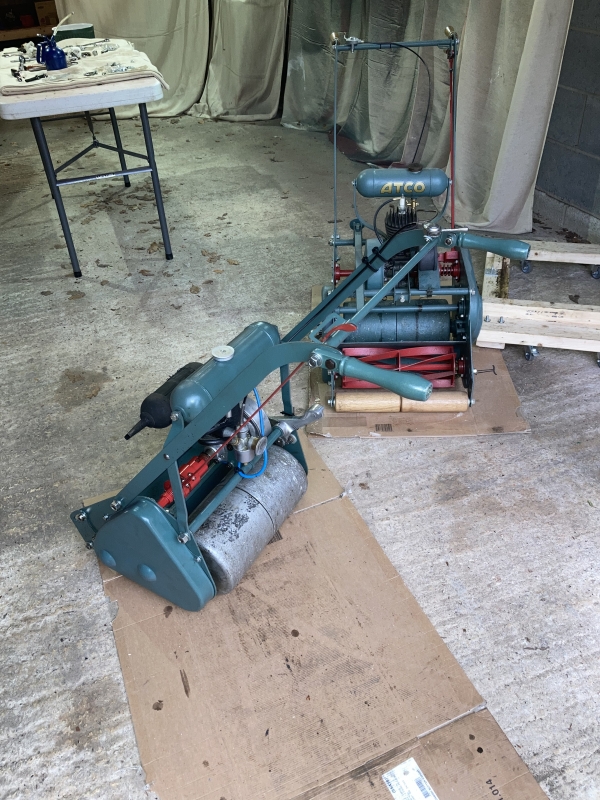 My '35 Atco is in the background, I've since placed the branding on the petrol tank of that one, the finishing touch for the '54 Atco will be the branding as well.

Two things I've noticed since assembly.  First, there appears to be some sort of 'petroil leak' coming from around the spark plug (very strange, but I have video to prove it) where its joined to the cylinder barrel; yet it doesn't seem to affect the engine's ability to run (still has good compression).  The other thing is the two-part drive roller.  Once under load one side of the roller engages while the other side doesn't (I'll need to take that apart and probably re-orient the dogs on the ratchet)  But the spark plug leak has me puzzled.  it makes a fair amount of racket at the clutch shaft assembly when disengaged, until I take hold the drive gear opposite the shaft with my hand.  I can't tighten the nut and gear any more than I already have, and there is a slight amount of drift, but it doesn't seem to affect the operation.   I've yet to place the mower under load (cutting grass) but that's somehting I plan to do tomorrow!

Here's a pic of all three of my projects: the 1954 Howard Bantam Rotavator, the 1935 Atco (centre) and the 1954 Atco. The wood rollers on the 1954 Atco are again English Oak and were purchased from Mike Floody, and Atco transfers are from this website's own store - I'm a little disappointed in the registration quality of the transfers as there's a sliver of white backing peeking out around the left-side of each of the letters, unless of course that's intentional, in which case they're as they should be...  I'm now considering selling the '35 Atco (now that its complete), and keeping the '54 Atco as working mower for the back garden. 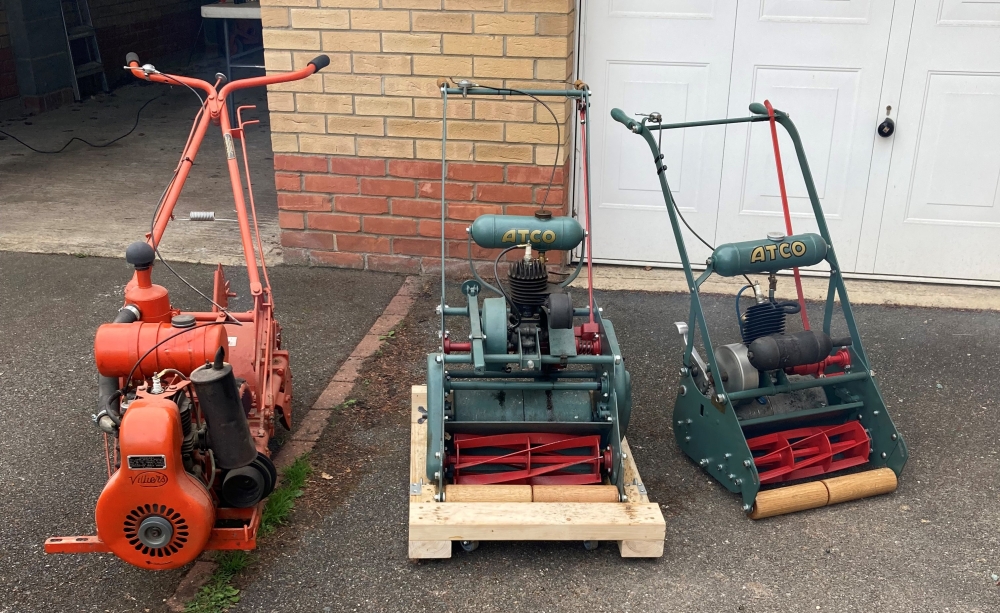 Well done on the restorations ... I have a 1954 14" ATCO (https://www.oldlawnmowerclub.co.uk/forum/history-and-technical/technical...) and some questions about yours.

My unrestored mover seems identical to yours (apart from kick start), I intend to get the engine operational before I start restoring mower.

- What model Villiers MK is it? my coil is faulty want to replace, I 've been pointed here (http://www.villiersparts.co.uk/ignition.html).

- Did you paint the cylinder head? Black ? paint type?

- Would love to retrofit a kick starter but can't seem to source any anywhere.

- The red and green colours you chose, were they specific to Atco or just a match attempt by you.